It will come as no surprise that this section begins with a few words about vodka (водка). Virtually all of the countries in this part of the world lay claim to being the first to distil this spirit of mythical status, each claim probably having as much validity as the others. Whatever the truth, it’s an inescapable fact that vodka distillation is big business. Every supermarket and shop has row upon row of vodka bottles of all shapes and sizes, varying widely in quality and price. It’s usually colourless and free of flavourings, although there is a huge market around the world for spirits flavoured with so-called complementary additives such as pepper, honey, grasses and fruit (eg: lemon, raspberry or cranberry). Most people in Belarus drink it straight and unflavoured, as do I. There is an active market in home-distilled vodka and people out in the country are particularly inventive when it comes to making use of organic material for this purpose, usually potatoes. It often tastes surprisingly smooth but can be astonishingly high in alcohol content, so if offered, by all means give it a try but do treat it with extreme caution and absolute respect. I’ve experienced a few terrible hangovers after a night of domashnaya (‘home’) vodka. But I have never drunk it without knowing its source or being able to trust the founder of the feast. 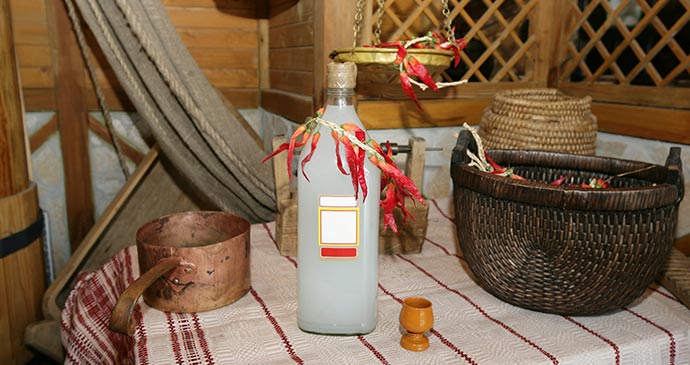 Home-distilled vodka can be found all over Belarus; it is often smooth tasting but remarkably high in alcohol © Ala Charnyshova, Dreamstime

Beer (пиво) is popular as a staple alcoholic drink for recreational consumption. Much of it is bottled or cask-conditioned, but there is a growing trend for local micro-breweries to produce their own diverse range of craft beers of high quality. If you’re an aficionado, you will have no difficulty in sourcing an increasing number of excellent examples and ‘beer bar’ or ‘beer pub’ are signs you will find in increasing numbers around towns and cities as the country reaches out to welcome incoming visitors from abroad as well as offering a different type of night out for locals.

The cuisine of Belarus derives from the same historical and cultural sources as those of its neighbours and is an articulation of the people’s relationship with the land. So if you’ve travelled in Russia, Ukraine, Poland and the Baltic states you will recognise dishes and recipes that are common to each. For generations, local people have grown their own produce, particularly potatoes, root vegetables and fruits. This is no surprise, for to do so reflects some of the key historical features of life here across the centuries: long and unrelenting winters, short but intense growing seasons, political and social tyranny, the intensely physical and demanding workload of the peasantry and periodic famine. The resilience needed to combat all of these privations has to be fuelled by hot, nourishing and restorative food. For generations it was a simple question of survival.

The staple diet of those in rural communities was always related to the potato and other root vegetables because for those living close to the land, this type of dish made good use of produce that was grown locally. Historically, the timing of meals for those working the fields always depended upon the beginning and end of their working day. A big breakfast, around dawn, based on boiled potatoes and baked pancakes, was followed by the main meal of the day around noon. Often served in the fields, the first course would consist of borsch (beetroot soup) laden with vegetables, potatoes, mushrooms and occasionally meat. In fact, to call this dish ‘soup’ does it something of an injustice, for it is a meal all of its own. The second course would be a dish based on cereals and more potatoes, washed down with kvas, kompote or sour milk. When the sun was at its height, it was a nourishing, filling meal, packed with energy-fuelling nutrients to keep the workers going until dusk. Supper at home after dark would inevitably be more potatoes, this time with some form of stock. There was always a plentiful supply of bread, cereals and meat in the autumn and winter. Spring was the hungriest season of all, simply because last year’s store of produce would have been consumed during the harsh winter

Historically, meat was often in short supply and was only really eaten on the occasion of significant Christian festivals. Pork has always been a favourite, along with salted pork fat, which is regarded still as a great delicacy. One of the most popular pork dishes is machanka, a personal favourite of mine. It is said to date from the 18th century and consists of chunks of meat in a rich and thick gravy, served in a stoneware pot with fried pancakes. You can expect to find it on every restaurant menu. On a recent visit, my family introduced me to the concept of eating (wait for it) frozen pork – smoked, placed in the freezer and then eaten straight from it. Your senses will tell you that everything is wrong about this curiosity, but when it (literally) melts in your mouth as you chew it, the experience is unexpectedly tasty. If it’s ever offered, do give it a try.

Your accommodation costs will easily be the biggest expense of your visit and at the higher end they can be substantial. Hotels in Belarus now fall into three broad categories. First, the clichéd relics of the former Soviet Union (monolithic concrete blocks), many of them still in state ownership; next the new breed of private establishments, often boutique in style; and finally the big boys, the international chains at the top of the market with their vast, gleaming monuments to capitalism and free enterprise. In the first category, a star system ranging from one to five is in operation but it bears little resemblance to anything that you will have seen before. The older Soviet-style hotels have a bewildering variety of rooms of different class and status, with prices to match. You can expect to be offered, for example, a room that is economy, standard, business, semi-suite or deluxe, with daily rates starting at US$60 and going all the way up to US$900 and beyond. You will be encouraged to indulge yourself at the top end of the range, but if all you want is somewhere to rest your head, then rooms at the bottom end will be more than adequate. In the second category, facilities and standards of service match those to be found outside the country. And in the third you will find pretty much all that each particular brand offers across its worldwide portfolio. Whatever your choice you can usually find a reasonable deal on a decent hotel room if you have the time and confidence to shop around online.

All of that said, you don’t have far to look if you crave a taste of the old-style Soviet experience. In the 1960s and 1970s, when the first intrepid European tourists pioneered holidays to the Soviet Union through the only medium that was available (the state tourist agency Intourist), they all returned home with tales of having stayed in soulless, monolithic concrete buildings where the awfulness of the food was matched only by the surliness of the staff, there was no hot water, every fitting was hanging off, there was never a plug for the bath, the windows didn’t fit their frames and guests were kept awake into the early hours by the cockroaches. Today things are different in the throwback emporia you can still find in Belarus: the food is pretty good, the staff try to smile (some of them, sometimes), you don’t need to bring your own bath plug and perhaps most important of all, the cockroaches seem to have gone. Nevertheless, the soulless monolithic buildings are still there, as is the concrete, both more crumbly and neglected than they were back then.