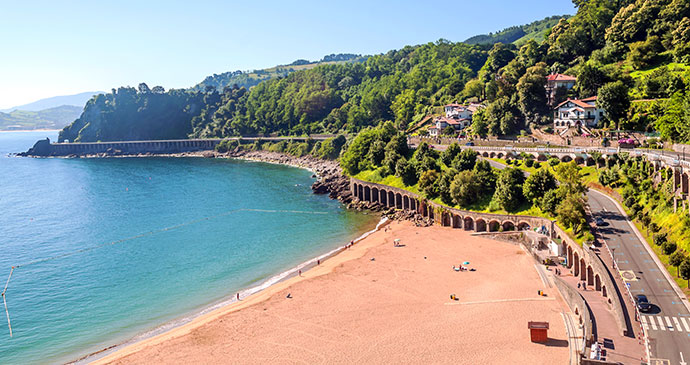 Across the region as a whole, June, July and August are the driest months, and of these July and August are the warmest and sunniest. The Basque Country and northern Navarre are green for a reason, however, and that reason is rain. Rain usually falls on some days in every month, with December to March being the wettest. One peculiarity, particularly of the coastal region, is what’s referred to as sirimiri, a persistent rain of tiny droplets that is much lighter than a drizzle – more refreshing then annoying. Winters along the coast are kept mild, thanks to the influence of the Gulf Stream.

In southern Navarre, where the climate has a more Mediterranean character, rainy days are fewer, temperatures will generally be 2–4°C higher than Pamplona, and the summer maximum in the Bardenas Reales desert area can reach 37°C.

A number of factors determine the best time to visit the Basque Country and Navarre. In terms of climate, no months can be guaranteed as being totally rain-free. July and August may be the warmest, but they are also the most popular, with the latter being particularly awash with visitors, mainly locals and tourists from other parts of Spain. Prices for accommodation in those months can be significantly higher, especially on the coast; roads are busy, parking spaces in resort towns harder to find. Visitors who enjoy the ‘buzz’ of busy resorts or who intend to spend time on the wonderful beaches will enjoy being here in the peak of summer, and can also benefit from the many fiestas that are unsurprisingly organised to coincide with the locals’ downtime.

June and September bookend the Spanish holidays, making these months very pleasant for those who like to escape the crowds or who baulk at paying higher accommodation prices; such visitors should also avoid Easter week, though again this is a lively and educational time to be in Spain, slightly less so in France. If you are determined to visit a specific town or area at a specific time, check the relevant tourist office website to see whether your visit coincides with a local festival: this may be exactly what you want, but if it’s not then you may wish to reconsider your dates to avoid higher prices or non-availability of accommodation. Some hoteliers report that the peak season is getting longer each year as the region becomes more popular. 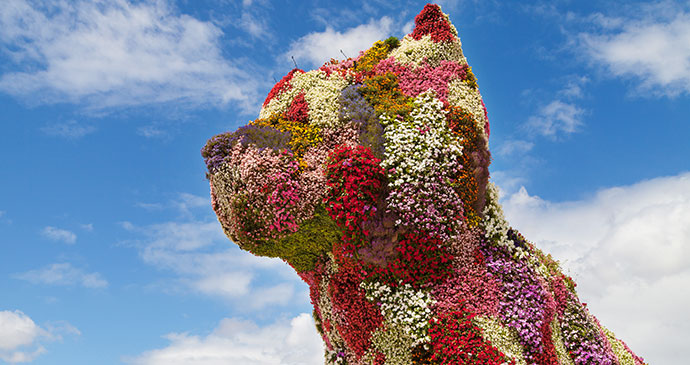 Surf, swim or sunbathe? Choose your urban beach accordingly in San Sebastián, then reward yourself with a memorable meal in this gastronomic paradise. Promenade around the bay, admire the Belle Époque elegance of the buildings, enjoy the atmospheric Old Town, or shop at the many boutiques.

Walk the banks of the Nervión River, marvelling at the city’s urban regeneration, symbolised by the stunning Guggenheim Museum, then hit the bars of the Plaza Nueva for a compact bar crawl and some pintxo sampling. Perhaps take in a match at San Marnés stadium.

Enjoy the green spaces of this understated administrative capital on foot or by bike before visiting its perfectly preserved Old Town.

Indulge in the products of the vines, admiring the architecture of some designer wineries, and walk the narrow, atmospheric streets of beautiful Laguardia.

Take the train up a mountain

Grind your way to the top of La Rhune in a near-century-old train, catch the incredible views north and west along the coasts, then walk back down and visit nearby Sare or Ainhoa, officially two of France’s most beautiful villages.

Roam the Navarrese badlands of the Bardenas Reales (star of many a film set), with their astonishing rocky outcrops, rare birdlife… and screaming military aircraft.

Learn to surf in Biarritz

Or almost anywhere along the coast. World-class waves, top surf schools, renowned board-makers – you’ll find them all in Biarritz.

The Basque Country, both French and Spanish, and Navarre are compact regions and a decent road network allows speedy travel between the major towns and cities. Away from the motorways, pottering around rural Rioja Alavesa, the back roads of peaceful Soule or the high parts of northern Navarre will take longer on the narrower, winding or mountain roads. Despite their diminutive size, the Basque Country and Navarre could still provide a lifetime of holidays for the inquisitive. Rushing through this beautiful part of north-central Spain and southwest France will deny a wealth of treasures to the impatient visitor. Depending on your particular interests and assuming that your time and budget are not limitless, it makes more sense to choose an area covered by this guide and delve into it in more detail, or follow a theme and pursue it. With the mix of languages and landscapes, the richness of cuisine and fascinating character of the people, travelling ‘slowly’ is strongly recommended.