The Alentejo has a Mediterranean climate with hot (and occasionally very hot), dry summers, mild autumns and winters (with changeable, rainy weather and snow only in the Serra de São Mamede mountains), and warm, sunny springs.

The Alentejo is best visited in spring, late summer and early autumn when temperature is in the 20s and low 30s and visitor numbers are at a minimum. Spring sees the meadows burst into multi-coloured bloom, storks nesting on telegraph poles and butterflies on the wing. In autumn the vines and olive trees are heavy with fruit, the leaves are beginning to turn golden brown and wispy mist floats over the Serra de São Mamede mountains. Wildlife lovers – especially birdwatchers – should also consider winter, when huge flocks of migrating birds arrive on the coast and around the lakes. 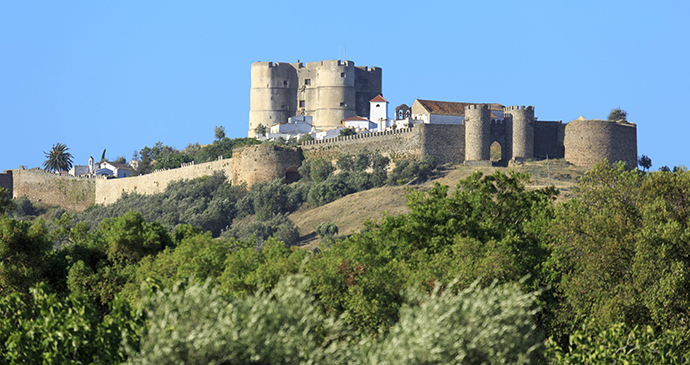 The Alentejo countryside is dotted with numerous little fortified villages, like Evoramonte near Estremoz © Alex Robinson

Stroll through Évora’s streets and alleys, stopping for creamy coffees and souvenir browses, and wonder at the monuments to its turbulent history – its ruined Roman temple and Moorish walls, its remnant palaces, its fortified cathedral and its magnificent small museum. Grit your teeth at the grisly skulls and skeletons in the Chapel of Bones and remember the gruesome side of Iberian Christianity, which saw the viciousness of the Inquisition.

Get lost in the maze of Moorish streets around Elvas castle, ducking under washing lines that span the narrow ways, chancing on magnificent marble-filled churches, forgotten chapels and sweeping views over the plains to Spain.

Walk the medieval walls of the old Islamic fort town of Marvão, and clamber up the castle to see the backs of eagles as they soar on the thermals over the flatlands below.

Wander the winding cobbles of Castelo de Vide, past whitewashed houses pinked with bougainvillea, and discover the old Jewish quarter and synagogue built when more than 20% of Portuguese were Sephardim.

Hike the craggy hills of the Serra de São Mamede and Vale do Guadiana natural parks, home to rare plants and among the most diverse range of birds and mammals in southern Europe, including the critically endangered Iberian lynx.

See the lavish Braganza palace where the English queen who brought tea and marmalade to the nation was born.

Surf or spread your towel on the empty beaches that stretch north and south from Grândola town.

Explore the Alentejo’s Islamic past in the spectacular hill town, perched on a cliff above a bend in the Guadiana River in the heart of a natural park.

See a stone circle far older than Stonehenge, imbued with a sense of the sacred and set in pretty olive woodlands just outside Évora.

Stay in this bone-white and perfectly preserved medieval fort town on a rocky crag near the Spanish border, with jaw-dropping views over the Alqueva lake and olive groves of the Alentejo plain.

Put your feet up with a glass of fine Alentejo wine and watch the sun sink over the countryside at one of the Baixo Alentejo’s adega wine hotels.

Stay in Baroque luxury at the Hotel Convento de São Paulo, a former Pauline Convent with a beautiful chapel covered in azulejos and palatial living quarters, and spend your days hiking in the countryside and visiting the dramatic castles at Evoramonte and Redondo.

Don’t miss staying with a family in a traditional fazenda farmhouse, set in meadows grazed by Lusitanian horses or in a tiny beachside village.