With its location between the mountains and the sea, Abruzzo has considerable variety in its climates. Coastal areas enjoy an average temperature of at least 24°C during the warmest month, July, and maximums rise to above 35°C; up in the Apennines, L’Aquila and Avezzano average about two degrees cooler. The weather remains relatively stable near the coasts, so the summer months can often feel uncomfortably hot for long periods of time. Winters are generally cool to mild in coastal areas (average temperatures of 7° in Pescara) but can be rather cold in the mountains (2.5° in L’Aquila), where temperatures of −20° are not unknown and snow often lingers until early May.

There’s variety in precipitation too, ranging from only 600mm a year (average) in Sulmona, in the south, to 1,000mm in Chieti. Generally, autumn and winter are the rainiest times of the year, though some mountain regions, such as L’Aquila, can be wetter in the spring.

Over recent years Abruzzo has experienced some exceptionally hot summers followed by bitter winters. The summer of 2003, for example, took its toll on the region when, for weeks on end, maximum temperatures rose above an unrelenting 40°C. The summer of 2007 saw this trumped, with temperatures soaring to over 45°C, particularly in Pescara, which, for a period of about two weeks, was the hottest city in Italy, if not in all of Europe. During the summers of 2012, 2013 and 2015, the region again experienced innumerable weeks of unremitting temperatures in excess of 40°C. Some older Abruzzesi are sure this is irrefutable proof of global warming. At the other extreme, the bitter 2011/2012 winter saw perhaps some of the most significant snowfalls in the region with even coastal cities buried under feet of snow.

Abruzzo is, to coin an old travel cliché, a truly ‘year-round destination’, with ancient villages, castles, lakes and rivers nestling between soaring mountains that in the winter months offer some of the best skiing in the country – some of them only 30km from a pristine coastline.

Abruzzo’s climate is Mediterranean, with hot, dry summers and cold winters (especially in the region’s interior). However, each season has its own charm, not to mention a plethora of seasonal activities and sightseeing, no matter what the month. The spring and summer period bring pastel-coloured fields with red and purple flowers, an endless calendar of events in charming medieval towns with warm terracotta roofs and, of course, packed beaches. The months of July and August can often be relentlessly hot and dry for long periods, with daytime temperatures typically reaching 38–40°C. While travellers from places such as Australia will not find the sun as intense as back home, it is still powerful and protection is a must. Some years, it can be warm to hot as early as April and well into October.

During the colder periods, the region opens up to lovers of winter sports, especially during the months of December to February. Snow can fall as early as October and as late as April, and during midwinter it is bitterly cold in the higher mountains. Sunny winter days can be magical in the mountains and the snow gives the towns and villages a fairy-tale appearance. 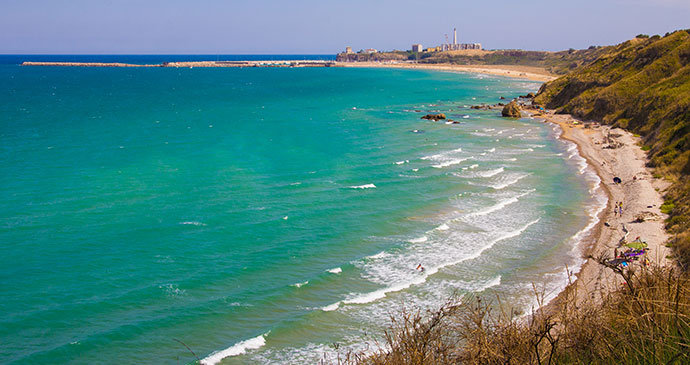 Abruzzo has a wealth of pristine beaches. The beaches of Tortoreto, Pineto, Silvi, San Vito Chietino and Fossacesia, and beaches in five frazioni of the city of Vasto: Punta Penna, Vignola, San Nicola, San Tommaso and San Salvo Marina have all been awarded with Blue Flags by the Blue Flag Programme, which sets standards for the sustainable development of beaches and marinas all over the world.

Do bear in mind that just because a beach doesn’t have a Blue Flag it can still be a great place to spend some time. The beaches in Pescara are still enjoyable and a great place to relax and socialise with friends and locals, and there are also sections of the Chieti Province that have not been rated by the Blue Flag Programme but which abound in white sand and turquoise waters, not to mention the trabocchi (traditional fishing platforms built out into the sea), for which the Chieti coast is famous (and which today are home often to good seafood restaurants). 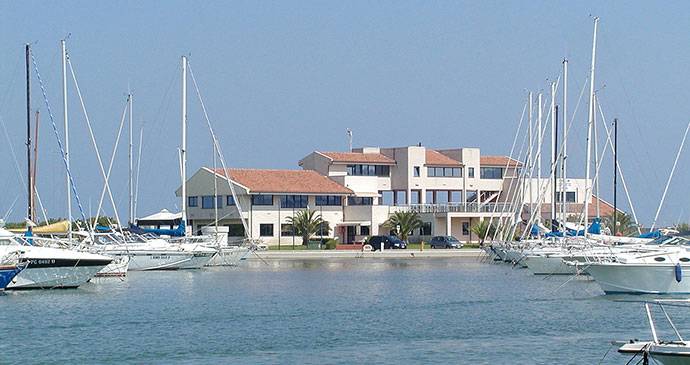 In Pescara, enjoy a Saturday-morning breakfast at La Bresciana or Pasticceria Bar Turchi in the city centre. Head across the river to the old town and take in the Museum of the People of Abruzzo for a look into the history of the Abruzzesi and their culture. A 5-minute walk away is the House Museum of Gabriele D’Annunzio, one of Italy’s most famous writers and a personal friend of Mussolini. Spend the afternoon shopping in the city centre before having dinner at around 20.00; it is very rare for locals to eat earlier than this and, indeed, for you to find a restaurant willing to serve. Food is important in Pescara and there are many decent restaurants. During the summer, try the fish at one of the stabilimenti that line the beaches, then stroll along the promenade and tuck into one of the city’s revered gelati, such as Il Chicco d’Oro (in neighbouring Montesilvano). If you’re feeling up to it, head for the nightlife that the Adriatic coast is so known for. Spend the next day at the beach or head for the hills, visiting the historic centres of Chieti, Spoltore or Città Sant’Angelo. 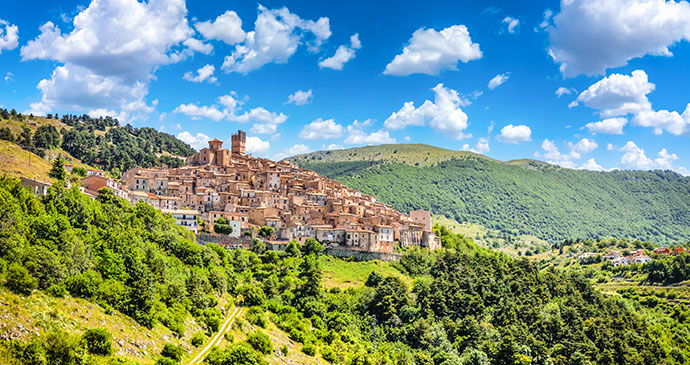 Castel del Monte is another of Abruzzo’s castles © minnystock/Dreamstime

Abruzzo is home to many beautiful castles. In Ocre, the impressive Ocre Castle is actually a 12th-century fortified castle-village, laid out on a triangular plan with various defensive towers. Its structure meant that a number of people could survive quite happily in the knowledge that enemies below would have a very hard time breaking in, given its position high on a cliff (almost 1km above sea level), with a sheer drop down one side. Excavations here took place as recently as July 2007, at which time more residential housing was found within the walls of the castle. Aerial shots clearly show how well the fortress’s layout has been preserved.

The ruins are dangerous and the inside of the castle is currently closed, although the real highlight here is walking around the outside and being impressed by its sheer dominance over the valley below. That, and the extraordinary views. 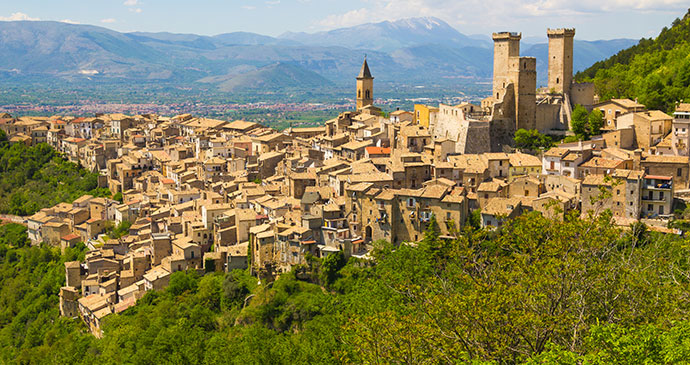 Abruzzo is dotted with thousands of medieval abbeys, churches, monasteries and civic buildings. These are perhaps more ‘authentic’ than their nearby counterparts in Tuscany and Umbria on account of their less ‘preened’ nature.

One of the most charming medieval towns is Pacentro. Situated east of Sulmona, the town was first settled around the 8th century, and occupies a lovely setting at 650m on the western hills of the Majella National Park. Aside from the castle, there isn’t a particularly famous church or landmark; the town’s real charms lie in its steep streets and abundant examples of medieval housing.

The countryside of Abruzzo comes into full bloom and forms the perfect backdrop to visits to the region’s ancient towns. The rivers come into spate as the snows melt, and hiking and wildlife-watching opportunities open up through the three national parks and the many natural reserves. Head for the buzzing coastal areas and enjoy sun-drenched days on the beach followed by evening strolls along the promenade.

Start in Pescara and spend a few days lazing around and soaking up the sun on the city’s 16km of coastline. With a car explore the towns of one of the three national parks, taking in some wildlife spotting on the way. Alternatively, drive from Pescara through to the province of L’Aquila (steering clear of the A25 motorway) through the hills. Unfortunately, following the earthquake of April 2009, and the subsequent rebuilding efforts, visits to L’Aquila’s historic centre are restricted to the streets that have reopened.

Again, start in Pescara and then head out into the national parks, exploring the Chieti and Teramo provinces in greater depth and perhaps climbing a mountain or two (such as La Majelletta) for the excellent views. Wildlife lovers should head to the protected areas in the Majella and the National Park of Abruzzo. Explore Roman sites such as Iuvanum or the Italic sites at Schiavi d’Abruzzo. Don’t forget to spend some time relaxing on Abruzzo’s 130km-long coastline.

Start in Pescara and drive the coast-hugging A14 motorway south to Vasto, perhaps stopping at Ortona, San Vito Chietino and Lanciano along the way. Head inland to the Italic temple of Schiavi d’Abruzzo and then through the National Park of Abruzzo. Base yourself at Pescassèroli and hike through the marked trails around the park. Swap the National Park of Abruzzo for the Majella  National Park (about half an hour’s drive) and take in some inspiring sunsets. Drive northwest to the Gran Sasso and stay at a quiet agriturismo on Lake Campotosto while exploring medieval villages. Return to Pescara via the Teramo coast, stopping at seaside resort towns such as Giulianova, Roseto and Pineto.

A whole different perspective on the region becomes apparent during the colder months. The towns are illuminated with fairy lights, there are Christmas markets and in the mountains, there will often be plenty of snow.

One or two weeks

Explore the Pescara region and go skiing, with some winter hiking thrown in, before heading off to tour the smaller towns of the region, transformed by a blanket of thick snow.