Its equatorial location and low altitudes ensure that Suriname has a typically hot, sunny and moist tropical climate. Temperatures are fairly consistent throughout the year and countrywide, typically hitting a daily maximum of around 30°C, exacerbated by a high relative humidity (typically more than 80%) but tempered in many areas by a river or sea breeze. Average annual rainfall in most parts of the country is around 2,000mm. It rains year-round, mostly in the form of short dramatic cloudbursts, but rainfall peaks during the two wet seasons, which run from late April to August and from November to February. There is still quite a bit of rain in the intervening dry seasons, as indicated in the weather charts below, with Paramaribo being typical of the coastal belt and Brokopondo of sites further inland.

Suriname can be visited at any time of year. Being close to the Equator, temperatures are not strongly seasonal, with daily averages in Paramaribo ranging from 27–29°C throughout the year. The low-key nature of tourism means that seasonal overcrowding is not really a concern either. In most respects, however, the best time to visit Suriname is during the relatively dry months of February to March and August to November, and the worst time is during the wettest months of May to August, when the interior in particular is prone to flooding and the already limited road network becomes even more so. For wildlife enthusiasts, turtle viewing, a very popular activity, is best from late February until May, although leatherbacks keep laying until August. Migrant shorebirds are most prolific from mid-August to late April.

Suriname has developed a rather unusual tourist industry, wherein most visitors base themselves in Paramaribo for the duration of their stay and use it as a springboard from which to join several short (mostly one- to three-day) modulartours to individual sites of interest, returning to the capital between excursions. We assume that this system has developed partly as a result of the limited all-roads-lead-to-Paramaribo nature of the transport infrastructure. It also reflects the fact that most visitors to Suriname – whether they be Dutch or Belgian interns, holidaying emigrants, or family of one or the other – typically stay for months rather than weeks, and slot in a few short trips during weekends. As a result of this, few tours follow a long itinerary countrywide, and opportunities for independent travel without returning to the capital are somewhat restricted. It also means that you are usually best off taking a mix-’n’-match approach to setting up a trip, checking what tours are available to your first priority destinations, booking those, and then slotting in other short tours or independent day and overnight trips around them.

Broadly, we would recommend that visitors dedicate at least three days to Paramaribo, Commewijne District and their immediate environs, as well as slotting in a tour to one of the two recognised turtle-viewing sites (Matapica and Galibi), and at least one expedition deeper into the interior, whether it be a day trip to Brownsberg, lodge-hopping along the Upper Suriname, a no-frills organised tour to Raleigh Falls (Central Suriname Nature Reserve), an adventurous kayak excursion on the Upper Coesewijne, or a more upmarket package to the likes of Bergendal Eco-Resort, Kabalebo Nature Reserve or Palumeu. 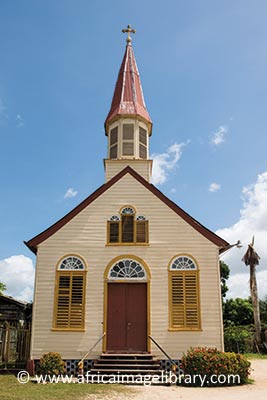 Paramaribo and the coastal belt

This is the most densely populated part of the country and the most ecologically varied, with a range of habitats that includes saline mangrove swamps, wide freshwater rivers, dense primary rainforest and lush tropical plantations. Paramaribo, with its equable atmosphere and historic riverfront city centre, makes a great base for exploring the coastal belt, whether you go on a series of organised tours, use public transport or travel under your own steam with a rented car or bicycle. There are some very varied sites of interest, ranging from sandy turtle-viewing beaches and forested plantations teeming with birds, to historic old forts and the brooding ruins at Jodensavanne.

The immense tract of Amazonian rainforest protected within Brokopondo and Sipaliwini accounts for more than 85% of Suriname’s surface area yet supports fewer than 60,000 people, not even 10% of the national population. One of the world’s greatest remaining wildernesses, this is an immensely exciting area to explore, traversed by only two roads of significance, a surfaced strip heading north to Afobaka Dam and Atjoni, and the rougher dirt road running west from Zanderij to Apoera. Indeed, much of the region is most easily explored by boat, with the Upper Suriname and Coppename rivers in particular forming wide rapid-strewn aquatic ‘boat highways’ navigable deep into the interior.

Other places, such as Palumeu and Kabalebo, are strictly fly-in only. Independent travel in the interior is at best challenging and at worst impossible. This means that most visitors experience the region by joining one or two organised round trips from Paramaribo to specific destinations. And in truth the experience offered by these different tours is to some extent interchangeable. Wherever you go, there will be forests, monkeys, parrots and toucans, there will be a river, some rapids or waterfalls, boats of one form or another, and opportunities to fish and swim. Bergendal should be the top choice for nervous jungle novices, Kabalebo is especially well suited to wildlife enthusiasts and birders with deep wallets and high expectations of service and comfort, and Palumeu is for well-heeled travellers with a strong interest in Amerindian cultures. More adventurously, Boven Coesewijne is the place for keen canoers, Central Suriname is for fit and flexible travellers seeking a packaged riverine adventure, and Brownsberg has something for everyone, as do the fascinating Marron villages of the Upper Suriname though the latter area is particularly suited to backpackers with time to spare and a tighter budget.