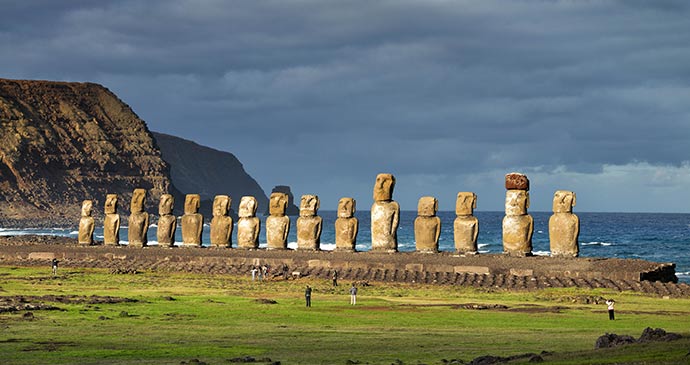 This tiny island is the remotest inhabited place on earth.

When Philip Larkin described fellow poet Ted Hughes as ‘like a Christmas present from Easter Island’, somehow everyone knew exactly what he meant. This tiny island, the remotest inhabited place on earth, is known worldwide for its moai, massive stone figures carved by members of a now virtually forgotten culture which developed in total isolation over many centuries.

After the collapse of the moai-carving culture, the island was left deforested and almost depopulated, but still dotted with moai, some standing in groups on ahu platforms, some overthrown nearby, and many abandoned at the quarry where they were carved. These remain today alongside petroglyphs and other relics. It’s intensely evocative, largely because so little is known about their creators and the disappearance of their culture. Nowadays the native Polynesian culture is rebuilding well, but without tourism it would be a very limited subsistence lifestyle.