Home to the wonderous Lago Nahuel Huapi, this region of glorious scenery is brilliant for exploration.

With its lakes, mountains and forests, this part of Patagonia is a delight. Several adjoining national parks line the cordillera, along the Chilean border: Lanín, Nahuel Huapi, Lago Puelo and Los Arrayanes. A horizon of impressive Andean peaks forms a backdrop to the many beautiful lakes that characterise the area, the largest of which is Lago Nahuel Huapi. This lake, like every great lake, has its legendary sea monster. Those who claim to have seen the Nahuelito report a large beast moving like a long undulating piece of leather. Watch out for it while you are taking part in the many watersports, including windsurfing, diving and kayaking, that the lake encourages. Be especially careful when reeling in that ‘big fish’! 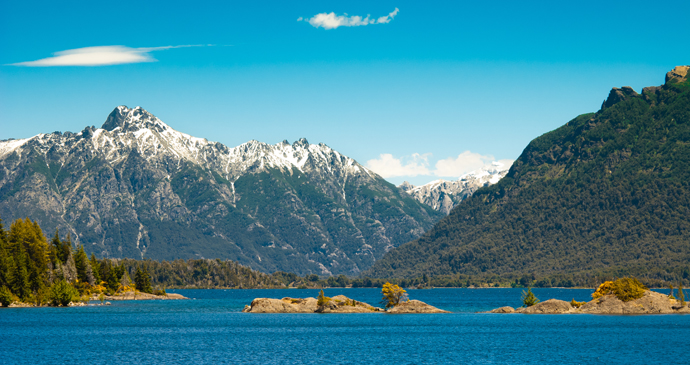 At the foot of the magnificent snow-capped Lanín Volcano (3,776m), trees that grow nowhere else in the country thrive on the volcanic soils, including raulí and roble pellín, both types of Nothofagus or false beech. Also here is the lovely ñire, in an unusual location for this southern species of false beech. The araucaria or pehuén is commonly called the monkey-puzzle tree and is a gorgeously unusual primitive pine that is sacred to the Mapuche. It grows up to 45m and is topped with a parasol-like crown; the largest individuals are estimated to be over 1,000 years old.

Certain rare mammals also make their home in the park; the endangered huemul deer, the threatened Andean otter or huillín, the elusive puma and, the smallest deer in the world, the pudú. Glacial lakes more typical of the south are plentiful (24 to be precise) in this mountainous landscape and the icy waters contrast with the thermal springs steaming nearby. The park was established in 1937, and covers an area of 379,000ha. It borders Chile and the adjacent Nahuel Huapi National Park to the south.

The beautiful and unusual arrayán or arrayanes (Luma apiculata) tree is a species of myrtle that is found as a lone tree or in rare groves throughout the area. One such grove is on Isla Victoria, in Parque Nacional Los Alerces, and another very small grove is just west of Llao-Llao. The unusually large grove protected by Los Arrayanes National Park is truly unique for its density of ancient arrayán trees. Century-old individuals are protected here. They grow very slowly: 150cm in 50 years; the oldest stand at almost 20m with trunks 50cm in diameter. If you look closely at the bifurcations of branches, the bark seems to wrinkle and crease, giving them their ancient and sage appearance. The cinnamon-coloured trunks contort and twist and the large base roots gnarl and turn over the surface of the earth, resisting the urge to dig deep. Instead they produce new suckers that may climb up other trees.

This suckering ability can lead to a substantial grove of trees that are all clones of the same individual. From this point of view an arrayán grove can be classified as one of the largest organisms on earth. One of their most interesting properties is that their endothermic bark is always cool to the touch. In the spring, the trees produce small white flowers, later sweet purple fruit, eaten by the indigenous peoples. The leaves have medicinal properties, being said to soothe muscle pain and intestinal infections when taken in an infusion.

The area of this park was once part of Nahuel Huapi National Park but was given its own designation in 1971 in recognition of this rare and beautiful tree and this large grove that is unique in the world, at Península Quetrihué, on the north shore of Lake Nahuel Huapi. The park’s total area is 1,753ha, of which just 20ha (at the southern tip of the peninsula) comprise the arrayanes forest. The ecosystem preserved in the park provides habitat for over 80 species of bird, 20% of which are migratory. The most significant is the Magellanic woodpecker (Campephilus magellanicus), the largest and most beautiful species of woodpecker and a symbol of Patagonia. The male has a bright red head and the female is all black with a distinctive top-knot feather curl on her head. The pair are never far apart from each other and you will likely hear them knocking before you spot them.