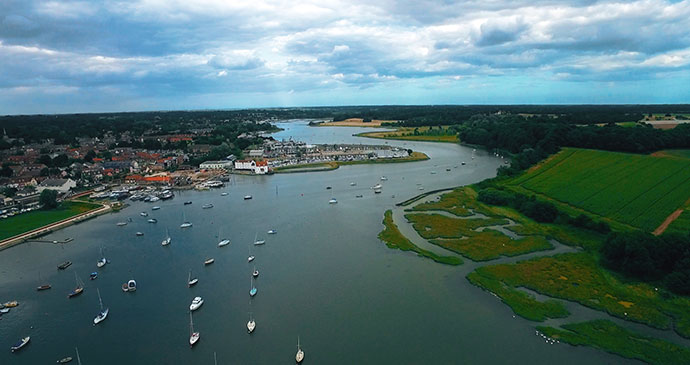 Stylish Woodbridge has a wealth of excellent independent shops and places to eat © thesuffolkcoast.co.uk

As for the Shotley Peninsula, if anywhere were to be awarded the clichéd epithet of ‘best kept secret’ then this might be a worthy contender.

Southeast Suffolk is somewhat of a mixed bag that deals with some of the largest places in the county as well as tiny estuary villages. The various inlets and estuaries that punctuate the coastline further north continue to do so in this part of the county, although they tend to be much larger and wider. The Rivers Deben, Orwell and Stour all flow into the North Sea along this stretch and the sea trade that dwindled centuries ago in the silted-up ports of the northern part of the coast still thrives here.

The Port of Felixstowe is currently the largest container port in the country, which might not suggest very much in the way of Slow credentials but the port is just one aspect of Felixstowe and the town itself has many redeeming features. Ipswich, too, might seem on first inspection to be brash and traffic-blighted, but the town has far more going for it than might immediately be apparent. Woodbridge, on the other hand, has abundant Slow appeal. As for the Shotley Peninsula, if anywhere were to be awarded the clichéd epithet of ‘best kept secret’ then this might be a worthy contender. It’s not a secret of course, just a little unsung.