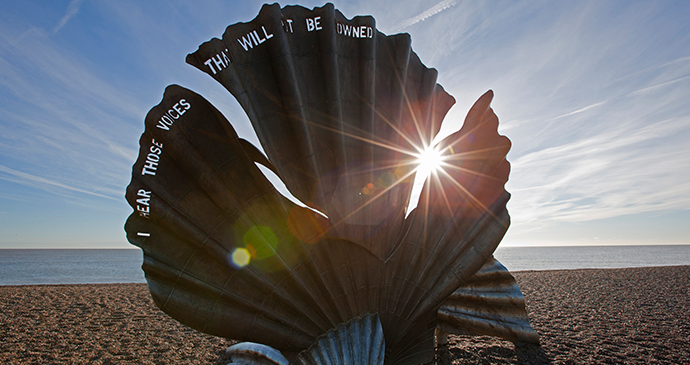 This shell sculpture at Aldeburgh, made by local artist Maggi Hambling, bears a line from the libretto of Britten’s Peter Grimes opera that was set in the former fishing town © Rod Edwards,Visit Britain

The Stour Valley is still very much a rural idyll, as the Stour babbles its way through fields of contented cattle and past improbably perfect-looking villages.

This area covers the southern part of the county that includes the towns of Lavenham and Hadleigh and their hinterland as well as them Suffolk side of the Stour Valley (from East Bergholt and the Stour estuary in the east as far as Clare in the west) that stretches along the Suffolk–Essex border to the south. In the south of the county, the Stour Valley is still very much a rural idyll, as the Stour babbles its way through fields of contented cattle and past improbably perfect-looking villages. A chocolate-box scene as painted by John Constable – and it was … many times over. It is not so much that Constable was a great painter – although he undoubtedly was – but what he painted. Though the healthy character of Constable’s Suffolk has disappeared, the subject matter of many of his works is still easily identifiable almost two centuries later.

This gives all of us a warm, fuzzy sense of continuity and tradition, and delights even those who do not normally have much time for paintings. Most of all, it somehow encapsulates the essence of rural England. The irony is that many who live here among the Stour Valley’s timber-framed splendours are also those that have the most tenuous connections to the area – a classic incomers versus disgruntled locals dilemma. London and the Home Counties are sometimes just a little too close for comfort and the goose that laid the golden egg is in danger of being flattened beneath the wheels of a commuting 4×4. In many cases the commute by car is a short one – just as far as Manningtree railway station, less than an hour from London’s Liverpool Street. In the old days, geese would walk all the way to London from the area. There again, it was always just a one-way trip.