It’s no exaggeration to say Ironbridge Gorge – then called Severn Gorge – was the birthplace of heavy modern industry, paving the way for much that we now take for granted.

In Coalbrookdale, Shropshire in 1709 an entrepreneur named Abraham Darby first produced pig iron in a coke-fuelled blast furnace. He wasn’t looking to set the world alight (and nor was his discovery the only spark that ignited it); rather he wanted to find an easier, cheaper and less labour-intensive way of casting ‘iron bellied potts’. Nevertheless, Darby’s breakthrough also set into motion the principles of mass production, contributing greatly to the Industrial Revolution. After the first cast iron hollowware followed the first iron barge, the first iron bridge, the first rail locomotive, all dreamed up in these few square miles. It’s no exaggeration to say Ironbridge Gorge – then called Severn Gorge – was the birthplace of heavy modern industry, paving the way for much that we now take for granted.

At the peak of the Industrial Revolution, the story of the gorge was already thousands of years old. Back, back in time, during the last glacial age, thick ice sheets forged the deep valley, slicing through Wenlock Edge, forming what would become the River Severn and revealing limestone, coal, iron stone and clay. It’s as though Nature, having shifted and shaped this patch of Earth, creating a perfect transport network and revealing perfect raw materials, sat back and waited 19,000 years for humans to realise their good fortune. 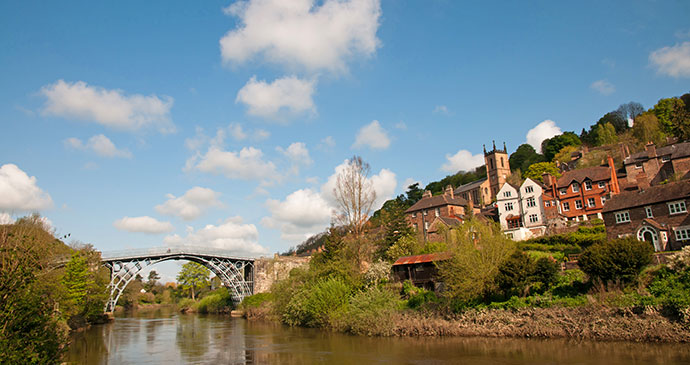 The sublime 30-metre iron bridge, built in 1779, showcases the genius of the Coalbrookdale ironmasters © stocker1970, Shutterstock

And when we view time in those vast, unwieldy, geological terms, it’s humbling to think that an entire industrial world sprung up and declined in Shropshire in the blow of a hammer, the turn of a flywheel. A relative few frenzied years of innovation, changing human destiny forever, and then industry focus moved elsewhere: production shifted to south Wales and the Black Country. Ironbridge Gorge retained an important trade in ornamental castings and tiles, but by the mid 20th century was in slow decline. People moved away and many factories, warehouses and workshops would become dilapidated.

Luckily for us, Nature was swift to reclaim the gorge for her own, repopulating the slopes of the valley with dense woodland, returning dragonflies and damselflies to the river, bringing wildflower meadows alive once again with cowslips, daisies, orchids and vetches upon which bees and butterflies feast. The topographer Edmund Vale in 1949 wrote of the ‘endless tips and spoil-banks’ that proved to be ‘of a nature kindly to vegetation’ and that 50 years’ growth, even then, meant the ‘gorge is once more a beautiful place, and the nightingale sings above the toll-house of the iron bridge’. The flora and fauna became jewels in the crown of a place that, in the 1960s when ‘Telford New Town’ was emerging from blueprints, became a source of interest rather than dereliction and shame. In 1986 Ironbridge Gorge was designated a World Heritage Site and visitor attractions grew up around it: shops, tea rooms, galleries and museums.

Shropshire’s industrial legacy is still evident too – and not only through books, wall plaques and the conservation efforts of UNESCO and the Ironbridge Gorge Museum Trust. In this region, we have former mining towns to explore, canals and towpaths, disused railway tracks (as well as the working sections lovingly restored by Telford Steam Railway). Even Telford, derided as it is by aesthetes, is a product of endeavour and ambition: the new-fangled vision that would relieve congestion in Birmingham and Wolverhampton. And there is no greater lasting symbol of innovation than the sublime 30-metre iron bridge, built in 1779 to showcase the genius of the Coalbrookdale ironmasters.