Get off-season rates in the region’s hotels

Enjoy the winter landscape, then relax in front of a roaring log fire. You deserve it!

Admire the first sign of spring in Snowdrop Valley

It’s a gentle 45-minute walk and then you can indulge in a cream tea in Wheddon Cross.

Hire a telescope and see the stars

Make the most of the dark evenings before the clocks go forward.

Enjoy the best walks in the region

The Exmoor Walking Festival begins at the end of April and continues into May. Small groups, varied distances, knowledgeable guides.

One of England’s barmiest festivals takes place on the spring Bank Holiday.

Watch the puffins on Lundy Island

It’s the most southerly breeding colony in England.

Learn to surf in north Devon

Saunton Sands and Croyde are the county’s top spots for riding the waves.

Watch men take to the air at Ilfracombe’s Birdman Festival

They all end up in the sea!

Get some culture at an Arts Festival

Both Appledore (Book Festival) and Porlock (Arts Festival) hold their events this month. 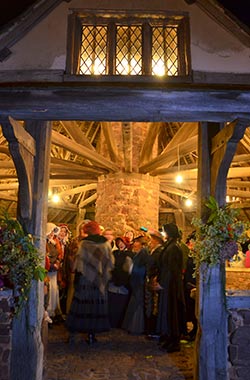 Foodies flock to the North Devon Foodfest in Barnstaple

Sing a few shanties at the Clovelly Herring Festival

Historically the ‘silver darlings’ were the lifeblood of this fishing village.

Go back in time at the Dunster Candlelight Festival