It’s a little unnerving to mention Stratford-upon-Avon without Shakespeare, and it is almost impossible to avoid a reference to him surreptitiously creeping into the notes about other places in town. He is omnipresent. Without the poet, Stratford-upon-Avon would be an ordinary market town. Its name is a literal translation of ‘the street at the ford on the river’, the town having been an important crossing point over the Avon from the Roman town of Alcester to the Fosse Way.

Medieval town planners drew up Stratford on a grid system and the centre remains very similar today. The architecture has changed, however, with each street becoming a hotchpotch of styles including the few remaining half-timbered properties, Georgian townhouses and glass shopping malls. It’s a compact town so you can easily walk the main streets within a morning to gather your bearings before deciding where you might like to visit. My preference is for the green spaces and a wander around Old Town, to the west of the town centre. There are no visitor attractions as such, but it provides an interesting and quiet change away from the fray.

The two-mile stretch from Alveston, a small village east of Stratford, to Holy Trinity Church is virtually reserved for day-tripping rowers.

After the Bard, it is the River Avon that is the biggest draw, for some the fun is found in watching inexperienced rowers steer their hire boat – and its passengers – into the overhanging trees before fighting with an uncooperative oar to get them out of strife.

Despite its 85-mile length from Naseby in Northamptonshire to Tewkesbury, where it joins the Severn, the Avon is barely navigable before it reaches Stratford, and only then by a couple of locks downstream does it allow larger boats. Therefore the two-mile stretch from Alveston, a small village east of Stratford, to Holy Trinity Church is virtually reserved for day-tripping rowers.

You can hire either traditional wooden rowing boats or engine-propelled craft – all named after a Shakespeare character of course – from the boathouse by Clopton Bridge and next to the chain ferry southwest of the theatres. This tiny chain ferry is useful for crossing the river at this side of town to avoid the walk to the pedestrian footbridge by the Bancroft Gardens. 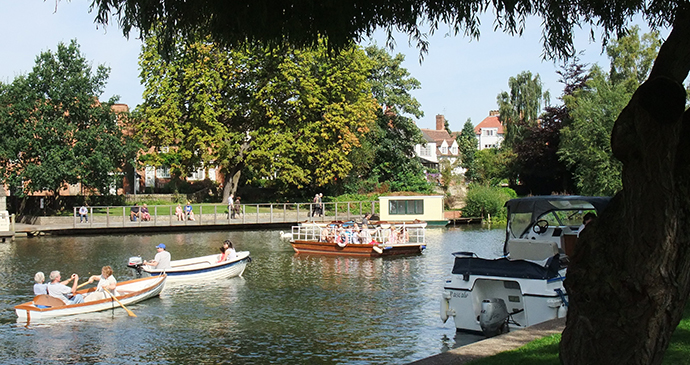 Clopton Bridge is the main thoroughfare over the river in Stratford; the next crossing upstream is not for several miles. Built in 1480 by Hugh Clopton, later Lord Mayor of London, the bridge spans the entire width of the river with 14 arches and houses, plus a ten-sided tollhouse at its northern end. It is one of Stratford’s most enduring images.

To my mind, with only a small stretch of waterway available to rowing boats southwest of the bridge, which is also used by narrowboats and guided tours, the nicest option for rowing is to travel upstream underneath Clopton Bridge towards Alveston. There you’ll pass private gardens on one side of the river and open space on the other bank. Half a mile upstream is a picnic area where you can moor up and stretch your legs.

The alternative to your own muscle power is to take a sightseeing cruise. Two companies are licensed to take passengers. Avon Boating run half-hour cruises leaving from the Bancroft Gardens in a fleet of vintage boats while Bancroft Cruisers take 45-minute trips from outside the Holiday Inn on the northeast side of Clopton Bridge.

For walkers, the Monarch’s Way runs through the town, along the northwest side of the river, while the Avon Valley Footpath treads the southwestern bank.

The canal runs for just 25 miles from Stratford to the outskirts of Birmingham.

You’ll also find the odd narrowboat moored up along the river. They enjoy the best of both river and canal, with the two meeting at Stratford Marina by the Bancroft Gardens. The canal runs for just 25 miles from Stratford to the outskirts of Birmingham but there are at least two locks for every mile. You can walk along the towpath in Stratford but outside of the town centre much of it is through industrial areas.

There is a mulberry tree said to have grown from a cutting taken from a tree that Shakespeare planted.

Stratford’s abundance of green spaces is certainly one of the town’s special points. The gardens around the Shakespeare properties are, surprisingly, some of the most peaceful, and colourful. They’re not so much for sunbathing but they do provide a pleasant place to sit and read a book and enjoy the riot of colour from the flower borders.

Of the public parks, the Bancroft Gardens are the best known and most used owing to their location next to the River Avon and between the Royal Shakespeare Theatre and marina. There’s usually a street artist performing – some more skilled than others – and boats in the marina serving as an ice-cream vendor and art gallery. On the Bridgefoot side of the marina, around the Gower Memorial to Shakespeare, the gardens have been attractively redesigned to incorporate floral displays and a rose garden. The Bancroft Gardens are the place to watch the world go by – and often the entire world does indeed seem to be there; don’t expect solitude.

On the other side of the river to the Bancroft Gardens and the theatres is the Recreation Ground (or ‘The Rec’). Occupying a large area running right the way along the river from Tramway Bridge (a pedestrian-only bridge adjacent to Clopton Bridge) to beyond Holy Trinity Church, this is one of the best areas for picnics with plenty of space to play and run around. There’s a large playground here, too. The Tramway Bridge connects the Recreation Ground with the Bancroft Gardens while the chain ferry transports you across the river to the Avonbank and RSC gardens, two connected gardens that run between the northern bank of the river and Southern Lane. Nearer to the town centre, the RSC Garden looks over the Swan Theatre and is where the RSC puts on occasional events. Despite its proximity to the Bancroft Gardens – only the theatre stands between the two – it is considerably quieter and exudes a different atmosphere. The Avonbank Garden, also owned by the RSC, is quieter still, except on days when open-air productions are performed. Sitting between the RSC Garden and the Holy Trinity Church, it is leafier than any of the other open spaces. The ‘pilgrimage’ footpath from Shakespeare’s Church to the theatres also runs through these two gardens.

Of all the places to sit in Stratford, the Great Garden is my favourite. It is a part of Shakespeare’s Estate and sits behind the garden of New Place. However, it is an open public space, free to visit and accessible through a gateway in Chapel Lane. A large square garden, it is fringed with modern sculptures inspired by Shakespeare’s plays, knobbly topiary and colourful borders. And just in case you seek yet another Shakespearean connection, there is a mulberry tree said to have grown from a cutting taken from a tree that Shakespeare planted. Regardless, it provides one of the quietest spots in the town centre.

It’s a pleasant out-of-town stroll that can be accessed from the centre of town when the crowds become too much.

A railway until 1976, the Greenway now forms a traffic-free route for walkers, cyclists and horseriders. The route begins from a car park and picnic area off Seven Meadows Road on the southwest outskirts of the town and continues for five miles to the village of Long Marston, where there is parking for horseboxes to allow riders to use the recreational route. Along the way are further picnic stops, one by Stannels Bridge along the banks of the Avon three-quarters of a mile from the start, the other at Milcote tucked away in a garden on the site of an old railway station.

You can take a 3½-mile circular walk starting at either the Seven Meadows Road or the Milcote picnic area entrances and using the Greenway together with the Avon Valley Footpath on the banks of the Avon. It’s a pleasant out-of-town stroll that can be accessed from the centre of town when the crowds become too much and, being totally flat, is easy for young children.