South of the High Street & east of St Aldates

St Aldates is one of the busiest streets in Oxford, it being one of the main arteries leading into the city, and is lined with bus stops every few yards.

There’s also a permanent exhibition on the real-life Alice in Wonderland.

At the top, close to the junction with the High Street is the imposing town hall and, inside, the free-to-enter Museum of Oxford. This provides plenty of history in its Explore Oxford galleries: the importance of the city’s location; the story of Frideswide, the Saxon princess and her connection to the city; the rise of the colleges as religious institutions; the ‘Town and Gown’ riots at the terrific-sounding Swindlestock Tavern in the 14th century; the rise of publishing; the base for Charles I during the English Civil War; and more recent industrial developments such as the birthplace of the British car industry under William Morris (the Lord Nuffield William Morris, not he of willow-leaved wallpapers fame), a trade that continues to grow with the construction of the Mini at Cowley, albeit under German owners. There’s also a permanent exhibition on the real-life Alice in Wonderland.

An Arcadian idyll in the centre of a bustling city.

Below the town hall, the vast expanse of Christ Church College begins, the slender cupola of the Tom Tower a giveaway to its presence. The tower is named after Great Tom, the bell within that resonates across Oxford 101 times every night at 21.05. The timing is significant, as the five-minute time delay is equivalent to 21.00 ‘Oxford Time’, being west of the Greenwich meridian. 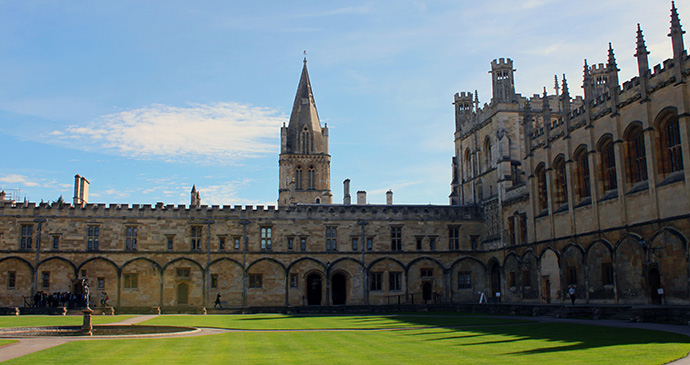 Built by Sir Christopher Wren, the Tom Tower hangs over Tom Gate, the main entrance to Christ Church College. The entrance for visitors to the college is through the wide decorative gates just to the south of the college, from where they can access the Great Hall, which served as the set for Hogwarts Hall in the Harry Potter films, Christ Church Cathedral and the Christ Church Picture Gallery with its collection of Old Masters.

These gates take you into Christ Church Meadow, accessed along the Broad Walk, one I would single out above all others in Oxford – an Arcadian idyll in the centre of a bustling city. From the gates are the most famous views of Christ Church College and the cathedral across the carefully tended and colourful Memorial Garden. The Broad Walk cuts a straight line between the meadow and Merton Field to the River Cherwell. Linking up with the Broad Walk is the Dead Man’s Walk that skirts Christ Church, Corpus Christi and Merton colleges, so named because it was the route taken by coffins to the Jewish cemetery – now the Botanic Garden – in the 13th century. But take the time to turn off the Broad Walk down the New Walk, another avenue of shady trees, past the longhorn cattle that graze the meadow towards the Thames, and you’ll come to a more peaceful world.

With the cattle of Christ Church Meadow grazing the foreground, the spires of numerous colleges and churches and the dome of the Radcliffe Camera prick the skyline.

Oxford has two rivers, the Thames and the Cherwell (pronounced ‘charwell’). The pair meet at the southeastern tip of Christ Church Meadow. Except that in Oxford the Thames is locally known as the Isis. On a small island between the Thames and the Cherwell ‘delta’ the Oxford University boathouses line up like soldiers. There are no names, only the college crests to distinguish one from another. It’s where sweat and the tears of elation or despair are absorbed by the river’s might. To see the boathouses busy, you need to be there for early morning training, or during the Torpids and Summer Eights racing weeks in early March and May, when much of Oxford lines the riverbanks of the Isis to cheer on the college teams.

One of the vintage views of Oxford is from the top of the little bridge that crosses the Cherwell to the boathouses. With the cattle of Christ Church Meadow grazing the foreground, the spires of numerous colleges and churches and the dome of the Radcliffe Camera prick the skyline. A favourite spot of mine is a quiet bend in the River Cherwell just behind the boathouses at the very tip of Christ Church Meadow, where you hear the bells of the cathedral melodiously ringing in the distance and watch the whispery seed heads from the thistles that line the meadow floating away downstream.

The meadow path along the banks of the Cherwell, being the furthest from the entrance gates at St Aldates, is one of the most pleasant places in Oxford for a summer picnic or a winter walk. Your lunchtime entertainment might be the hilarity of watching punts slide sideways as the inexperienced try to grasp the knack of punting, frequently finishing up with their pole stretched between two branches of a riverside tree. A leisurely punt along the Cherwell is as much a part of river life in Oxford as serious rowing. 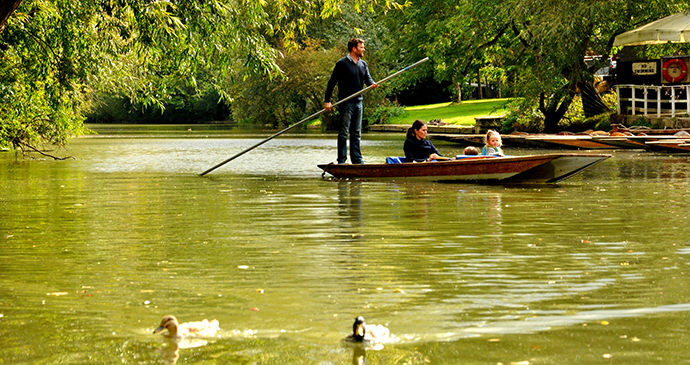 Punting on the Cherwell © Cherwell Boathouse

You can hire punts – or rowing boats if oars rather than slippery poles are your thing – from the boathouse at Magdalen Bridge, accessed off the High Street. Punts can also be hired from the Cherwell Boathouse, just north of the University parks, with a pleasant punt north to the ‘rural’ Victoria Arms, where you can moor your punt, have a drink in the pub garden before drifting back along the Cherwell.

Iffley is filled with pictorial houses and unexpected rural cottages and the stretch of river here is particularly attractive beside the lock.

If a skipper taking control is more your thing, larger boats ply up and down this southern stretch of the Isis. Salters Steamers run short trips from Folly Bridge, southwest of Christ Church Meadow, to Iffley Lock 1½ miles downstream. That said, I’d really recommend a walk along the Thames Path to Iffley. One of the village suburbs that make up Oxford (Old Marston, Headington Quarry and Wolvercote are also notable and worth a detour), Iffley is filled with pictorial houses and unexpected rural cottages and the stretch of river here is particularly attractive beside the lock. You can stop for a drink at the quirky Isis Farmhouse, which has a huge grassy riverside garden. 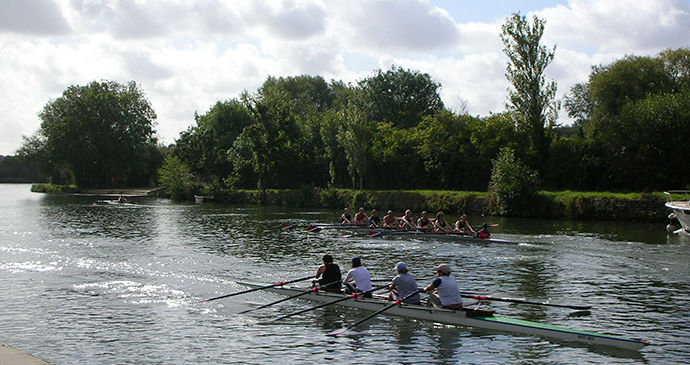 Ferns, alpines, palms and tropical lilies the size of tractor tyres shelter from Britain’s unpredictable weather in the greenhouses close to the river.

Butting up to the Cherwell is the university’s Botanic Garden, fit for any season and open all year round. Botanical family collections are grouped in large, rectangular borders and there are collections grouped by geography too. With over 7,000 different types of plant concentrated in just over four acres, it’s the most compactly diverse collection of plants in the world, as well as being Britain’s oldest botanic garden. One thing you’ll not fail to miss is the impressive specimen Pinus nigra (black pine) tree with its stubby trunk and branches that twist and curl their way to the heavens.

However, it’s the second half of the garden, through the giant stone pillars, that I find more exciting. Less formal, it has paths curving around orchards and beanpoles, water features and borders exploding with colour from spring to autumn. And ferns, alpines, palms and tropical lilies the size of tractor tyres shelter from Britain’s unpredictable weather in the greenhouses close to the river.