My starting point is the Carfax Tower, at the crossroads of the four main streets in Oxford. Its name is derived from the French for crossroads, carrefour, and it’s worth climbing the tower’s 99 steps to get some bearings. There are so many ‘dreaming spires’ that they tend to blend into a confusing mishmash until you begin to recognise certain landmarks – the slender cupola of Tom Tower of Christ Church, the dome of the Radcliffe Camera, the spire of St Aldates Church or the pinnacled tower of Merton College Chapel.

The Carfax Tower is all that remains of St Martin’s Church, the main body having been demolished to make way for road widening at the end of the 19th century. On its east façade, facing the High Street, is the church clock, accompanied by two ‘quarter boys’ who chime the bells every quarter-hour.

Shakespeare would stay here on his journeys to London, and became the godfather (rumour has it actually the father) of the Davenants’ son.

From the top of Carfax Tower you can look down on the north-facing Cornmarket Street, one of Oxford’s main pedestrianised shopping streets, where buskers vie for attention and Shakespeare’s Way continues on its trek from Stratford-upon-Avon to London. Hidden away from the bright lights of the shop windows are the Painted Rooms on the second floor of 3 Cornmarket Street. In the 17th century, this was the Crown Tavern, owned by John Davenant and his wife, who were friends of Shakespeare. The playwright would stay here on his journeys to London, and became the godfather (rumour has it actually the father) of the Davenants’ son, William. The Painted Rooms are occasionally open to the public to look at the Elizabethan wall paintings ‘hidden’ behind some early 17th-century oak panels, themselves covered in very early rich red wallpapers. They’re certainly worth it. 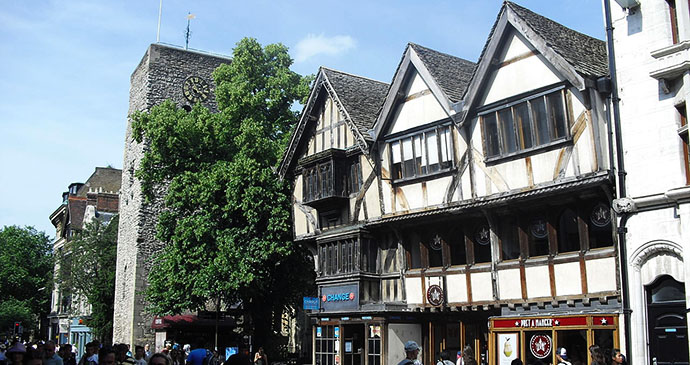 At right angles to Cornmarket St, running west, is George Street. The street is home to both the New Theatre where major West End productions are performed and also the Crisis Skylight Centre, a more modest community theatre and arts centre space with exhibitions and a café. In between is the Odeon Cinema, arguably one of the ugliest buildings in the city, but opposite is the far more attractive Faculty of History, with elegant ornamental stonemasonry, a pretty clock and a gabled façade; this was once Oxford’s High School for Boys where former pupils included T E Lawrence (‘Lawrence of Arabia’).

Oxford, of course, is known for producing many top-class comedians and actors through the Oxford Revue.

Gloucester Green, the square where two soldiers from the Levellers were shot for opposing Cromwellian forces in 1649, is accessed off George Street. The square is in need of an update but hosts a farmers’ market on the first and third Thursdays of every month. There’s a separate exit and entrance that leads onto Beaumont Street, where the Oxford Playhouse and its offshoot the Burton Taylor Studio Theatre put on more serious drama and community-based entertainment than the blockbusters offered at the New Theatre. 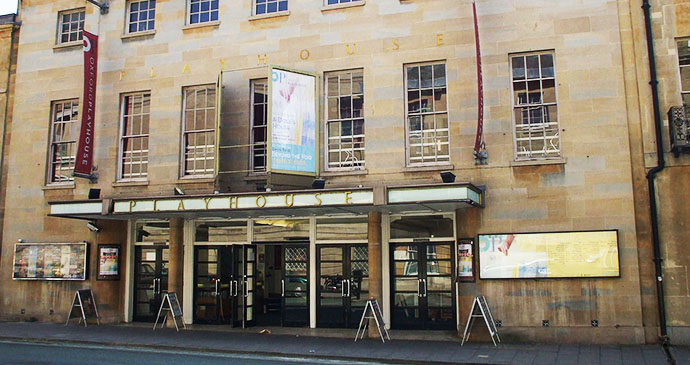 The entrance to the Oxford Playhouse © Omassey

Oxford, of course, is known for producing many top-class comedians and actors through the Oxford Revue. Past members include Michael Palin, Dudley Moore, Rowan Atkinson, Richard Curtis, Alan Bennett, Ian Hislop and Al Murray. You’re likely to be able to catch potential new stars from the current membership at the Burton Taylor Studio, named after another celebrated Oxford student, Richard Burton, and his former wife Elizabeth Taylor; the pair performed together at the Oxford Playhouse in 1966.

The Ashmolean Museum was the first museum in the world when it opened in 1683.

Opposite the Playhouse is the Ashmolean Museum, which was the first museum in the world when it opened in 1683. The museum has thousands of exhibits and is renowned for its collections from ancient Egypt and Greece as well as important works of art. My favourites are the displays from Mughal India in the Asian Crossroads Gallery and the paintings by Pissarro in the Western Art Gallery. You’d easily be able to spend all day in the museum, covering all five floors of displays. The museum is free to enter and there are many free or low-cost activities that bring the collections to life. 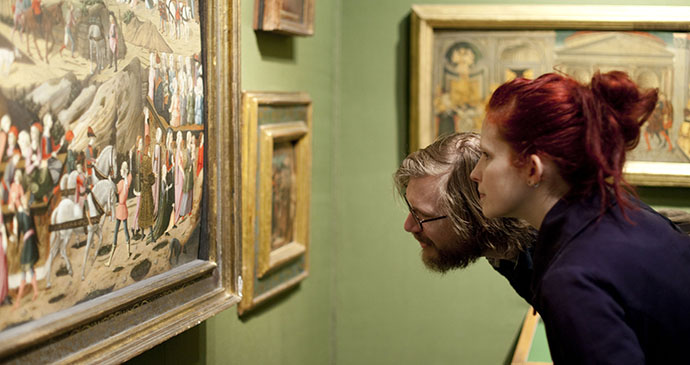 The east façade of the Ashmolean runs along St Giles, the widest street in the city, adorned by magnificent university college buildings built with those dream-like qualities that Matthew Arnold referred to – St John’s College on the east side and Blackfriars, on the west, home to a community of Dominican friars. St Giles, the patron saint of the poor, has a church dedicated to him at the northern end of the road where the Woodstock and Banbury roads converge. The St Giles Fair is held along the full length of the street every September, shortly after St Giles Day, and is one of the largest fairs in the country. Though not traditionally a hiring fair, it falls conveniently in line with the timing of other Mop Fairs held around the Cotswolds.

Oxford has had a long tradition with publishing, producing books long before printing presses were introduced.

St Giles forms the eastern edge of an area of Oxford known as Jericho. Formerly the quarter where print workers lived, this has always had a unique character and in recent years has become a trendy part of town, occupied by chic eating houses such as Raymond Blanc’s Brasserie Blanc on Walton Street. Neighbouring Great Clarendon Street is home to the enormous, in both square footage and stature, Oxford University Press and the world’s most famous dictionary. 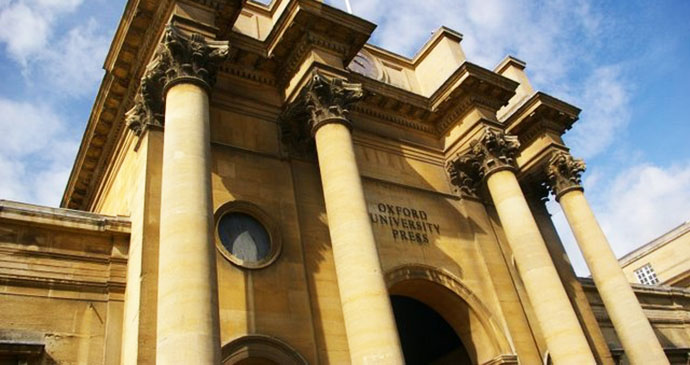 Though the Oxford English Dictionary (OED) is a relatively new addition – the first edition began publication in 1884 – Oxford has had a long tradition with publishing, producing books long before printing presses were introduced. Indeed, the city was hot off the mark with ‘modern’ technology, printing its first book in 1478, only two years after William Caxton set up the first British printing press. It is possible to visit the OUP museum by appointment to see displays of historic printing equipment, Alice in Wonderland and the OED.

The area of Jericho extends to the Oxford Canal, one of the oldest canals in England, stretching 77 miles from Oxford to Coventry. Beginning at Hythe Bridge, it joins the River Thames just 200 yards north at Isis Lock, meaning boats can travel from London to the north of England direct. You can walk the full length of the canal or simply stroll along the towpath from Hythe Bridge up to Isis Lock. Self-drive day trips on the canal are possible to Oxford from the canal centre at nearby Thrupp. The trip takes seven hours with no time in Oxford, but it provides a gentle day’s escape from the city bustle.