North of the High Street & east of St Giles

To Oxonians, the High Street is simply known as The High, a street bordered by shops for the first few yards from the Carfax Tower before being lined with the silk of smooth, honey-stoned college buildings. The area north of the High Street is one of the most concentrated university areas in Oxford, with some of the best-known colleges, such as Brasenose, Jesus, Queen’s, New College, Balliol, Trinity and All Souls, along with the most familiar university landmarks – the Radcliffe Camera, the Bodleian Library and the Sheldonian Theatre.

Crane your neck to look at the numerous grotesques and gargoyles that hang from the walls like impious schoolboys.

This is the best quarter for walking, with plenty of car-free streets, where you can glance at the magnificent architecture, craning your neck to look at the numerous grotesques and gargoyles that hang from the walls like impious schoolboys. Take a look at Turl Street – though you may find some ‘witty’ student has altered the street sign after a late night out – Brasenose Lane or Ship Street, which leads to St Michael at the North Gate, on the corner of Cornmarket Street. Another of the city’s lookout posts, the rickety stairs of the Saxon church tower can be climbed, past the giant hanging bells, for views above the rooftops.

One of the narrowest streets to wander in this area is the winding Queen’s Lane that leads to New College Lane and Catte Street. Crossing the two is the Bridge of Sighs joining the old and new quadrangles of Hertford College. So called because of its supposed similarity to the Venetian Bridge of Sighs (it actually resembles the Rialto Bridge more closely), its official title is Hertford Bridge.

This Palladian building is one of the most iconic landmarks of Oxford.

To me, nowhere more epitomises how special learning in Oxford is than Radcliffe Square, with the well-dressed entrance to Brasenose College on the west side, the ornamented gilt gates entering the other world of All Souls College to the east, the University Church spreading itself between the square and The High, the mesmeric matter of the Bodleian Library to the north and, in the centre, encompassed by iron fences, the Radcliffe Camera. This Palladian building is one of the most iconic landmarks of Oxford and is now used as a part of the Bodleian Library. 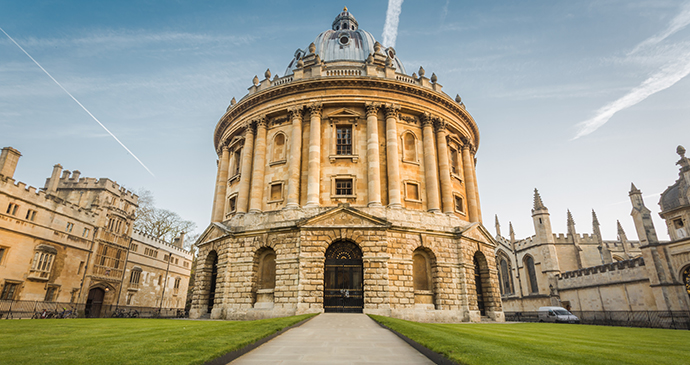 Wandering around Radcliffe Square, you’ll unwittingly find yourself in the sacrilegious act of walking all over books. For the Camera and the Old Bodleian Library (the New Bodleian Library – or Weston Library as it is called – is across the road on Broad Street) to the north are linked underground and much of the library’s storage areas lie under the Square. One of the greatest research libraries in the world, it is also one of a handful entitled to receive a copy of every book published in the UK; it now stores over 8 million volumes on 110 miles of shelving. Visitors are allowed to visit the Old Bodleian Library, which includes the Divinity School, the university’s oldest teaching and examination room, dating back to 1427. Entrance to the Schools Quadrangle, the courtyard in the centre of the Old Bodleian Library and the Exhibition Room, where regular displays are held, is free but you can take a ‘behind-the-scenes’ guided tour of other areas within the library, worth every penny just to see the vaulted ceiling, as intricate as a lady’s lace fan, in the Divinity School as well as the Camera.

My most recent visit was to the ‘new’ Weston Library. The building itself is a work of art that is winning many architectural prizes, but I was there to look at ‘Worcestershire’, one of the set of Sheldon Tapestry Maps on display. Showcased in the vast entrance hall, the mezzanine above lined with ancient volumes, the tapestry is grand in scale and distinguished in quality. Recently restored, it is, quite simply, one of the most beautiful things that you will see in Oxford.

I love its interior for the intricacy of the glass windows and the finely carved choir stalls in the chancel, riddled with woodworm.

South of Radcliffe Square is the church of St Mary the Virgin, the spiritual heart of the university, otherwise known as the University Church. I love its interior for the intricacy of the glass windows and the finely carved choir stalls in the chancel, riddled with woodworm. If your legs will climb the 127 steps, the top of the tower provides one of the best views of Oxford.

John Radcliffe, a scholar and benefactor to the university (hence the Radcliffe Camera) and the royal physician to William and Mary, is buried in the church but of more historical note is the use of the church in 1555 for the heresy trials of the bishops Latimer and Ridley and Archbishop Cranmer during the Reformation. Becoming known as the Oxford Martyrs, the trio were burnt at the stake just north of the city walls, now Broad Street. A cross set into the road here marks the location; the Martyr’s Memorial in Magdalen Street, at the western end of Broad Street, commemorates the event.

The Sheldonian Theatre was the first major work of Sir Christopher Wren. 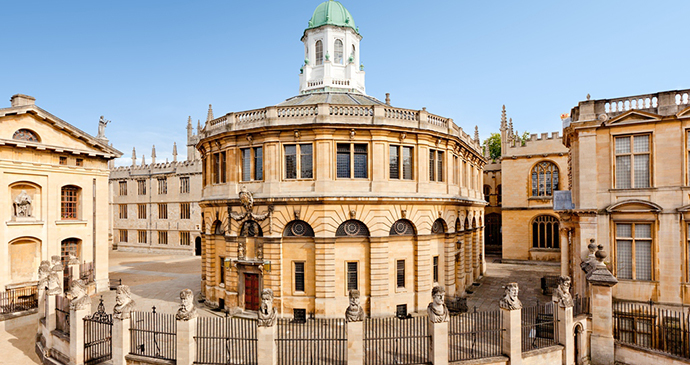 Broad Street’s other notable resident is the Sheldonian Theatre, the first major work of Sir Christopher Wren. It’s used as the university’s ceremonial hall when gowned students process towards matriculation, when they are formally admitted to the university and upon graduation. At other times of the year it’s open to the general public for a quick, fleeting visit or, better still, for one of the many concerts held there. The cupola is another rooftop viewing point.

Outside the Sheldonian Theatre and the neighbouring Museum of the History of Science overlooking Broad Street, 13 emperors stand guard – or rather cast a watchful eye – for it is only their bearded heads that are in situ sitting upon pillars. They do not represent any individuals, but each one sports a different-looking beard.

Marble busts and figures of eminent scientists such as Darwin, Aristotle, Galileo and Newton peer down upon you from among the arches as if to say, ‘Don’t you know anything?’

Walk down Parks Road, which runs parallel with St Giles, and you’ll find the medieval and classical architecture dressed in local soot-tinged Cotswold stone changes to Victorian Gothic brick. Keble College is here, named after the Reverend John Keble, who was Professor of Poetry at Oxford and a curate several miles away at the tiny church in Eastleach Martin.

Two of the best museums owned by the university are opposite; the University Museum of Natural History and the Pitt Rivers Museum. Both are free to enter and are a big hit with children. The Museum of Natural History is a fabulous building. Internally, the roof and ribs of the building are as skeleton-like as the exhibits it shelters. Marble busts and figures of eminent scientists such as Darwin, Aristotle, Galileo and Newton peer down upon you from among the arches as if to say, ‘Don’t you know anything?’ There’s a portrait of the Oxford dodo to the left of the main entrance and, elsewhere in the museum, information about the pigeon-like bird, where it came from and how one came to be in Oxford – and how European explorers and settlers aided its extinction. 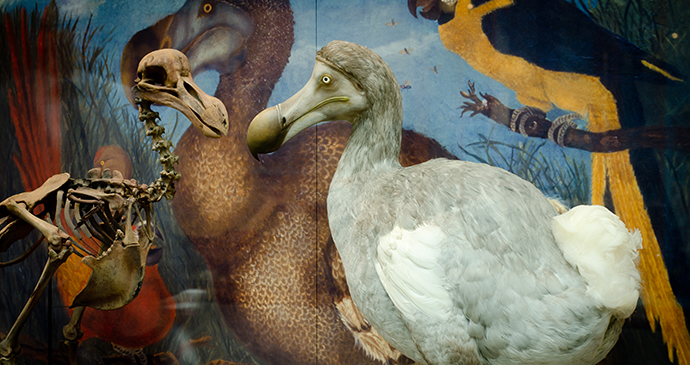 The Pitt Rivers Museum provides a dramatic change from the light and lofty Natural History Museum, through which it’s accessed. Very dark, it is like entering Granny’s attic, and is likeably old-fashioned. Three floors are stuffed full with over half a million artefacts and objects from around the world – anything from a totem pole to an ivory salt spoon, a knuckleduster to an old typewriter. Visitors are provided with torches to peer in the cabinets and anywhere else that objects from the anthropological collection are crammed. Children love the whole feel of the museum and there are many family events and activities planned throughout the year. But there is far too much to take in over one visit, so it’s an idea to explore a couple of themes at a time.

Don’t miss a chance to listen to the famous Magdalen College Choir sing.

Wrapped around the north and east of the museums are the University Parks. With 70 acres of beautifully landscaped grounds on the western bank of the River Cherwell they include many sports pitches for the university and a colonial-looking timber cricket pavilion. In among all this are specimen trees, flower borders, paths and public areas for informal games and activities.

As the River Cherwell curves around to form an ear shape on its way to meet up with the Thames, at the grounds of Magdalen College. This is undoubtedly one of the most beautiful of the Oxford colleges and the public are invited (for a fee) to walk through the grounds and the deer park – all very surreal in the centre of a city. In spring the meadow is smothered with Oxfordshire’s county flower, the snakeshead fritillary. Don’t miss a chance to listen to the famous Magdalen College Choir sing, either at one of the seven chapel services in which they appear or on May Morning when the choristers climb to the top of the Great Tower at the college and greet the sunrise with their singing.