East of the river

Much of the city centre sits in a pocket, tucked into a narrow loop of the Avon. But there’s plenty to see east of the river.

The River Avon in Bath

Like the Ponte Vecchio in Florence which inspired it, it is one of the few European bridges with buildings on it.

One of Bath’s great landmarks, Pulteney Bridge was completed in 1773 to the designs of Robert Adam. Like the Ponte Vecchio in Florence which inspired it, it is one of the few European bridges with buildings on it. The bridge, with its row of shops, has a front and back – the front, facing south, being relatively decorative, while the back is somewhat plain. 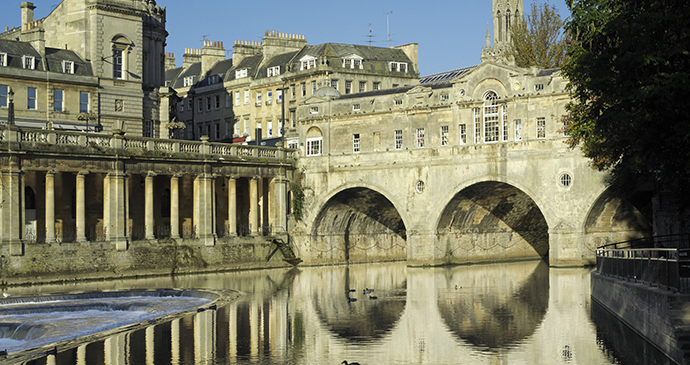 Beneath the bridge by the Pulteney Weir and sluice gate (the latter is not particularly pretty but it helps to stop Bath from flooding) are starting points for river cruisers, which make an idyllic trip, as you sit on board and let the buildings drift past. The more urban views don’t last for long; as the boat weaves around the overhanging trees, the snaking river becomes really quite rural and intriguing. The sycamore, ash and chestnuts overhang so much that you can’t see the next stretch of river. The blue flash of a kingfisher is quite likely as the valley suddenly opens out to river meadows and views of Little Solsbury Hill and Bathampton Down. The boat turns at Bathampton Weir, manmade 600 years ago and a rural outpost of the city.

On the return trip you can stop off at the Bath Boating Station, an attractive black-and-white timber boathouse where you can hire wooden rowing skiffs, punts and canoes, all handmade on the premises by the fourth generation of a boat-building family. Alternatively laze on the very attractive riverside lawns of the Bathwick Boatman pub, where you can enjoy a meal as the boats come and go. Our boat guide commented that the Avon around Bath is ‘as good as it gets’, a clean and healthy river with all 36 native coarse fish found in it and even the occasional otter. Boats cannot access the river west of Pulteney Bridge, so to explore the river here, walk or cycle a section of the River Avon Trail, beginning at Pulteney Bridge and leading 23 miles out of Bath into Somerset.

That the pitch is so centrally located is fascinating; you can see the verdant pastures through the gates along the riverside walk.

Opposite the ‘formal’ floral Parade Gardens on the west side of the river, where concerts are performed on the bandstand, is Bath Rugby’s Recreation Ground – or The Rec as it’s known locally – where fans sing to a different tune in the stands at the stadium of one of the nation’s top rugby teams. That the pitch is so centrally located is fascinating; you can see the verdant pastures through the gates along the riverside walk. Better still, you can actually watch a match from the stands, although you need to be quick with your ticket purchase; matches sell out well in advance. 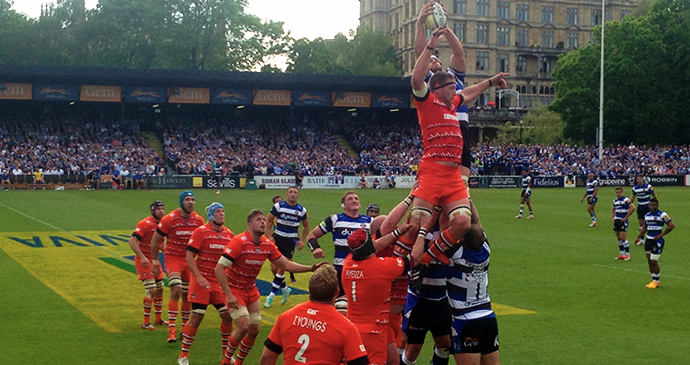 Bathonians are serious about their rugby, so if you want to don the club colours to watch a match, the Bath Rugby Shop is in Argyle Street, just east of Pulteney Bridge. You can’t miss the shop: it’s painted royal blue just like the team strip. Match tickets can be bought from the ticket office immediately next door to the shop.

Its understated elegance rivals that of the Champs-Elysées.

North of Bath Rugby, Great Pulteney Street is the grandest, straightest road in Bath at 1,000 feet long and 100 feet wide. Its understated elegance rivals that of the Champs-Elysées in Paris. Not the work of the usual architectural suspects in Bath, the street, built in 1789, was designed by Thomas Baldwin, who was also responsible for the Guildhall west of the river and numerous other streets east of the river. But like so many other streets in Bath, the architect designed only the façades in Great Pulteney Street, with the rear of each property differing from the one next door; Baldwin did, however, live in one of them, marked with a blue plaque.

The museum spills out into the Sydney Gardens, where peaceful grassy enclaves among the pines and beech trees provide the perfect place to spend a sunny afternoon with a book.

At the eastern end of Great Pulteney Street is the Holburne Museum, situated in Sydney Gardens. Inside the museum is the Holburne’s collection of fine and decorative art, with an important collection of 18th- and early 19th-century paintings to match the Georgian ‘theme’ of the city. A set of theatrical paintings once owned by the playwright Somerset Maugham brings an alternative look at the 18th century; many of the actors and actresses portrayed in the paintings performed in Bath during the heyday of the Theatre Royal. However, a major part of the museum space is for education and running alongside the collection and temporary exhibitions are events for people of all ages, from creative workshops for toddlers to adult lectures and study days.

The museum spills out into the Sydney Gardens, where peaceful grassy enclaves among the pines and beech trees provide the perfect place to spend a sunny afternoon with a book. Follies, Palladian columns and decorative bridges are all part of the appeal, although it does have the railway line running straight through it. I prefer Henrietta Park between the river and the Sydney Gardens, accessed either from Henrietta Street or Sutton Street. Within the park is a sensory garden. Just five minutes’ walk from the bustle of the city centre, it is a little haven, where scented roses brush up against rosemary and lavender, vibrant canna lilies fight with sword-like spiky agave and pergolas surround a symmetrical pool.

The section through Bath is truly historic: a mile-long stretch north from the canal’s junction with the Avon, known as the Widcombe Lock Flight, includes 19 listed structures along its length.

Large villas and town houses line the broad avenue that is Bathwick Hill, climbing out of Bath towards Claverton Down. Turn to face the city and the whole centre is laid out in front of you. Bathwick Hill, and indeed the Sydney Gardens, cross over the Kennet and Avon Canal, which begins in Bath, connected to the River Avon in Widcombe, a small, delightful Georgian suburb rarely explored by tourists. Like its disused counterpart, the Thames and Severn Canal further north in the Cotswolds, the Kennet and Avon links the Severn with the Thames. But the section through Bath is truly historic: a mile-long stretch north from the canal’s junction with the Avon, known as the Widcombe Lock Flight, includes 19 listed structures along its length, such as giant chimney stacks (used for steam pumps to help boats through the series of locks), and old lock-keepers’ cottages. Many were restored to mark 200 years of the canal in 2010. 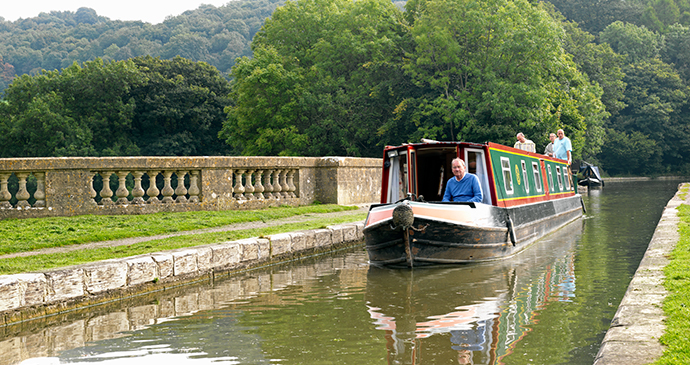 A walk along the towpath here is magical, with the sharply rising escarpment to Claverton Down terraced with smart Bath stone town houses to one side, and views over the centre of Bath to the other, together with the odd splash of colour from a passing narrowboat. At the Bathwick Hill entrance to the canal, you can hire day boats from Bath Narrowboats to take a gentle cruise out of Bath towards the Limpley Stoke Valley and the Dundas Aqueduct. Making the most of the canal is a must, either walking the towpath or working the locks with a boat.

One of the most attractive parts of the garden is at the bottom of the hill, the Wilderness Area where you can sit by the Serpentine Lake and gaze into the waters from the Palladian Bridge.

Completed in 1764 by John Wood the Elder, Prior Park was commissioned by Ralph Allen, the postmaster and owner of the Bath stone quarries, as a home for himself from which he could ‘see all of Bath and for all of Bath to see’. The vast house and buildings have been used as a private school for the last 150 years but couldn’t manage the upkeep of the 28-acre garden so gave it to the National Trust in 1993. Since then the Trust has spent every year reclaiming the garden, based upon old drawings. Far removed from formal parterres and topiary statues, Prior Park is entirely naturalistic in style, making the most of the sharp descent from the house down towards Widcombe. 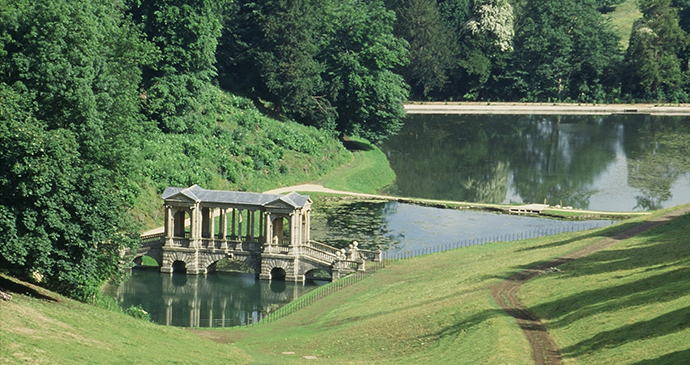 While the view of Bath is the key component, one of the most attractive parts of the garden is at the bottom of the hill (though, confusingly, being north of the house, regarded as the top of the park), the Wilderness Area where you can sit by the Serpentine Lake and gaze into the waters from the Palladian Bridge. It is a wonderful place to stretch your legs, and stretched they will be, as the climb back to the exit is punishing unless you take it slowly. To break the return climb I spent half an hour watching a not-very-nocturnal badger snuffling among and rooting out carefully planted bulbs and rhizomes from a woodland bank.

Prior Park is considered a green tourism site by the National Trust. There is no parking on site and visitors are encouraged catch a bus (Bath to Combe Down) from Dorchester Street in the city centre; the bus stops outside the entrance to Prior Park. Alternatively Prior Park is one of the Skyline Tour stops on the City Sightseeing bus. And from here you can pick up the six-mile circular Bath Skyline walk.

Period rooms such as Conkey’s Tavern bring the history to life, with most of the furnishings coming from colonial homes in the States.

It takes a little bit of effort to reach, but the American Museum in Britain on Claverton Down is a delight. Tranquilly set away from the city centre in the handsome Claverton Manor, it has magnificent gardens and views over the Limpley Stoke Valley. It’s essentially dedicated to exhibiting and educating about colonial America. The museum, the only one of its kind outside the United States, gives a fascinating insight into the ‘quiet’ America, even if the history it’s portraying isn’t so. 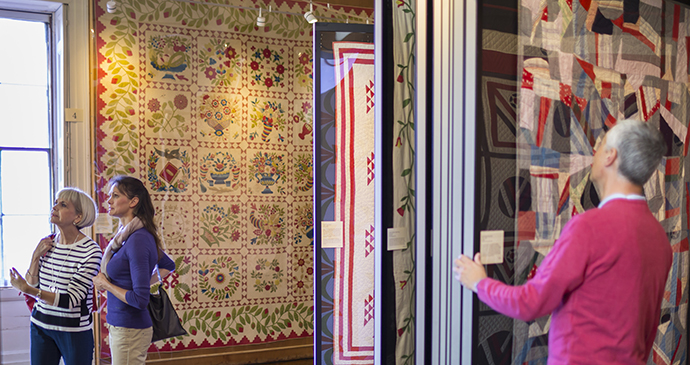 Period rooms such as Conkey’s Tavern bring the history to life, with most of the furnishings coming from colonial homes in the States. The museum focuses on the discovery and colonisation of America, as well as encounters with Native Americans; it has a strong emphasis on the crafts of both natives and colonials. The museum holds one of the finest textile collections in the world, and I particularly like the Textile Room, where antique quilts, hooked rugs, tapestries and samples hang. It’s an inspiring room where every Tuesday afternoon anyone interested in quilting can join in the making of a quilt. The idea is to recreate the companionship of a traditional quilting bee, where quilters work together and interact socially.