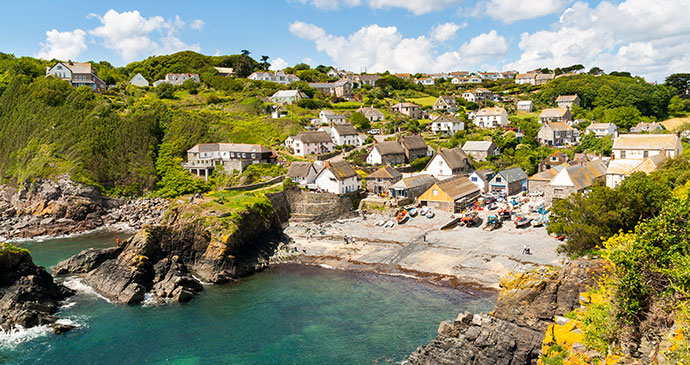 The tiny village of Cadgwith is wedged into a cleft in the serpentine rock © Ian Woolcock, Shutterstock

Westwards, the empty heath gives way to an aquamarine sea, where pale sandy beaches are revealed as the tide recedes.

The Slow lane starts here: away from main roads, crowded beaches, jammed harbours and busy towns, this part of Cornwall is perfect for quiet exploration and unhurried hours spent just looking, listening and absorbing the very diverse character of the peninsula. More of an island, in fact, than a peninsula, the Lizard has a coastline that faces not only west and east, but south for a few miles as well, while the Helford River carves a broad path through the hilly, wooded landscape to the north.

Lush and lovely gardens face each other across this wood-fringed river and footpaths ramble past muddy boatyards, secluded beaches and leafy creeks that can only be glimpsed or guessed at from tarmac roads. Tiny, unspoiled coves lie far below the southern cliffs where, if you search, pebbles of red or green serpentine rock that sit smooth and heavy in the hand can be found. Gaze skywards and you may be lucky enough to see a pair of choughs – Cornwall’s emblematic bird – tumbling overhead. In stormy weather, the furious sea breaking over the harbour wall at Porthleven from the safety of a pub window is compelling viewing; but beneath the lichen, coastal village churchyard tombstones remember the victims of the many shipwrecks on the Lizard’s unkind reefs and bars. Inland, miles of heathland teeming with butterflies are crisscrossed by tracks passing ancient tumuli, half-hidden beneath the gorse and heather. Westwards, the empty heath gives way to an aquamarine sea, embraced by rocky coves, where pale sandy beaches are revealed as the tide recedes. When a couple of friends from New Zealand who had been working in London asked me where they could find the kind of barefoot, natural maritime world they were pining for, I knew they would be happy here, staying at Henry’s Campsite, a haven for lovers of a wild and simple way of living under canvas by the sea. 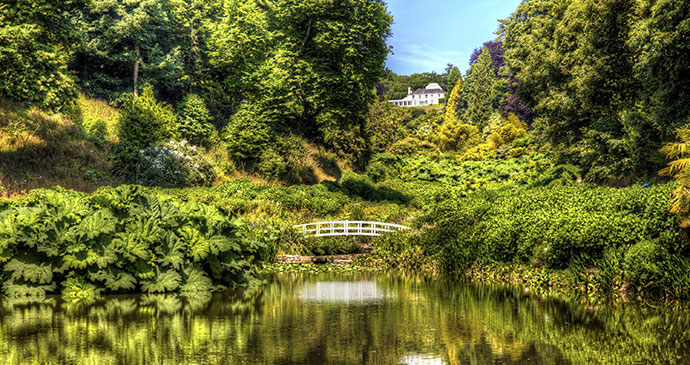 The remote exposure to the Atlantic has proved irresistible to the pioneers of communications technology. Marconi built his famous transmitters on the promontory at Poldhu, from where the first transatlantic radio messages were sent in 1901. Six decades later, the biggest satellite station in the world rose from the abandoned radar station at Goonhilly Downs, and now plans are advancing to turn the redundant station into a space-science centre, fulfilling the prophecy (for some) that Arthur will rise again.

Enjoying local food and drink forms a vital part of Lizard life. Organic ice cream, made by the Roskilly family, is hard to miss and pasties from Gear Farm or Ann Muller in Lizard village are, like Vicky’s Bread, legendary in these parts; freshly caught crab is a harbourside treat, and Helford Creek cider and apple juice will go down well with fans of real cider. Micro-breweries include Lizard Ales and the much-loved Spingo, brewed at the Blue Anchor in Helston. Trelowarren and Porthleven are rapidly establishing themselves as places where Slow food is championed and on the eastern side of the Helford, the vegetarian menu is supplied from the veg patch at the Potager Garden.