Going Slow in The Chilterns & the Thames Valley

It’s a land of stories: the real-life stories of those who ruled and those who rebelled.

Your hands, my dear, adorable,
Your lips of tenderness
Oh, I’ve loved you faithfully and well,
Three years, or a bit less.
It wasn’t a success.
Thank God, that’s done! and I’ll take the road,
Quit of my youth and you,
The Roman road to Wendover
By Tring and Lilley Hoo,
As a free man may do…
I shall desire and I shall find
The best of my desires;
The autumn road, the mellow wind
That soothes the darkening shires.
And laughter, and inn-fires.
Rupert Brooke, The Chilterns (1916)

Rupert Brooke used to go drinking in Princes Risborough and for walks in the surrounding area. His poem The Chilterns – published posthumously – gives a tantalising glimpse of what the Chilterns may have meant to him, offering the comfort and fulfilment which he had failed to find in a succession of doomed relationships. Just over a century later, it’s our pleasure, privilege and challenge to introduce the Chilterns to you, and to show how much there is to discover here, through ‘Slow travel’. 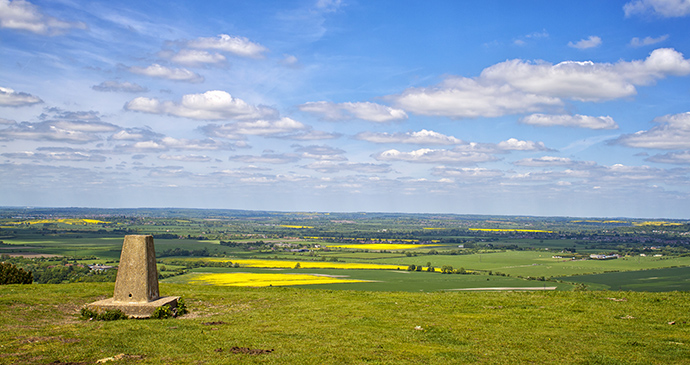 Climb to the top of Ivinghoe Beacon for a stunning vista of the Chiltern Hills © Juneisy Q. Hawkins, Shutterstock

For us, the Chilterns means travelling along sunken lanes with dappled sunlight peeking through green tunnels of trees, marvelling at the magic carpets of bluebells which appear in the woods in the spring, followed by orchids on chalk grasslands in the summer. It means wandering through woodlands of yew, sycamore, oak and especially beech – always beech – where local craftsmen used to work. At the end of every walk (or sometimes at the start, or in the middle), pubs stand ready to refresh us, as they have served generations before us. We hear the whistles of red kites overhead and glimpse deer as they patter through the woods  and sometimes outside them. While large, world-famous cities are not far away (London, Oxford), this is a land of cottages of thatch, brick and flint; of villages and market towns, each with its own peculiarities; and of historic houses, some grand to the point of extravagance, but many on a more human scale, where we can imagine living ourselves. And it’s a land of stories: the real-life stories of those who ruled and those who rebelled; the tales told by great writers and artists who lived and worked here; and the more recent stories that film and TV crews continue to create, for productions screened all around the world.

In terms of geography, the counties of Bedfordshire, Berkshire, Buckinghamshire, Hertfordshire and Oxfordshire all have a share in this area of low hills to the northwest of London. From Hitchin in Hertfordshire, going southwest to Goring-on-Thames in Oxfordshire, the Chilterns covers about 650 square miles. These counties receive over two million visitors every year, with people spending over £1 billion while they are here, according to VisitBritain. We hope to encourage some of those visitors, and others who are new to the area, to try the Slow travel approach. The Thames Valley undoubtedly has a rather higher general profile than the Chilterns. We have researched that part of it which borders the Chilterns to the south, from Runnymede in the east to the outskirts of Reading in the west. We have also included the Vale of Aylesbury as its landscape, wildlife and heritage are impossible to separate from that of the rest of Buckinghamshire. And if all that weren’t enough, we’ve made the occasional foray over our self-defined borders, for one or two attractions that we think are just too good to miss. 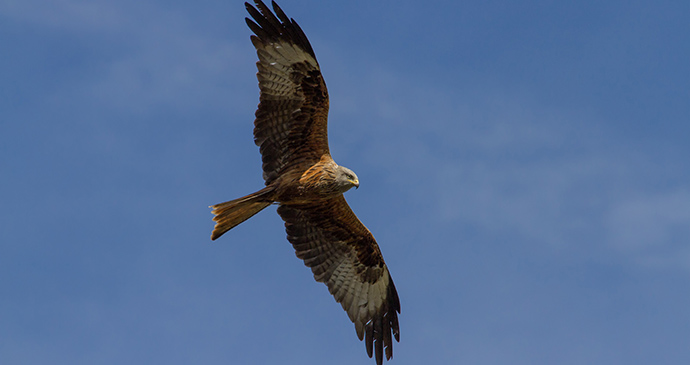 Red kites circle the skies over the Chilterns all year round © Ian Sherriffs, Shutterstock

No matter where you might be, something beautiful or unusual is always close at hand.

Some regions conjure up images for travellers just by the power of their names: the fells of the Lake District, or the Cotswolds with its mellow yellow stonework. For the Chilterns, though, the name is not enough. Where are the Chilterns, anyway? What does it mean when an MP ‘takes the Chiltern Hundreds’? The Thames Valley, by contrast, follows one of the world’s most famous rivers. Together, the Chilterns and the Thames Valley represent a tantalising, fascinating area.

We’ve lived in the Chilterns for almost 30 years; Helen has lived here all her life. No matter where you might be, something beautiful or unusual is always close at hand. We smile at news reports of ‘little-seen’ red kites, knowing that they circle the skies above our home village of Prestwood, whistling cheerily, all year round. The fragility of an Area of Outstanding Natural Beauty co-exists with historic properties going back for over half a millennium. Across the Chilterns, the Thames Valley and the Vale of Aylesbury, the ghosts of those who have made much of our national history, and of some of our greatest writers, are all around us. We hope this guide will help you to discover and enjoy the quieter, quirkier attractions which Slow travel is all about – and, as this can only be a selection, to discover your own Slow travel highlights, too.