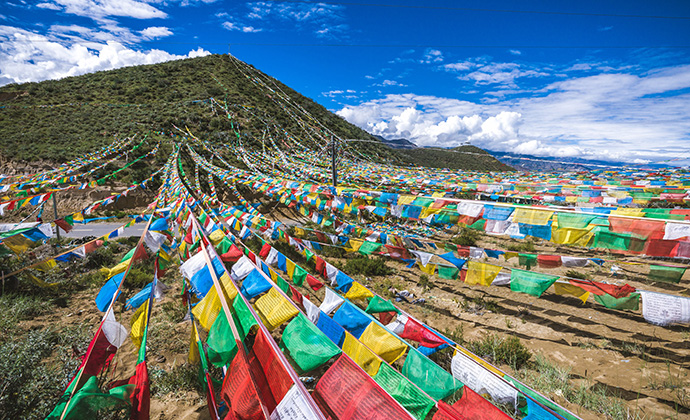 A visit to Tibet is a strange experience, with intense emotional highs and lows. It’s weird because the real Tibet no longer exists. Since their military occupation in 1950, the Chinese have systematically dismantled the Tibetan social fabric, destroyed its great monasteries, persecuted its monks and nuns, forcibly resettled its nomads in housing ghettos, and wreaked devastating damage on Tibet’s pristine environment. Any description of present-day Tibet and Tibetan culture must be framed in this context of iron-fisted Chinese occupation.

‘Intense’ is a word that applies to many aspects of Tibet. It applies to the amazing resilience of the Tibetan people in the face of extreme adversity. Their battle has been largely a pacifist one, of suffering and enduring – a game of ultimate patience and tolerance. ‘Intense’ captures the feel of the landscape. The intensity of colours at this elevation is extraordinary, with glacial-blue lakes, luminous-yellow fields of mustard, deep reds and browns of barren rock landscapes, and then, up on the horizon, looms an ethereal Himalayan snow cap, backed by piercing blue skies. The colours practically glow: when you show photographs of these landscapes to people who haven’t been there, they question the unreal colours – what kind of filter did you use?

There is only one drawback to visiting Tibet: you can easily become addicted to the place. It makes you reluctant to leave, and as you do, you’re already plotting your return – a return not necessarily to Tibet itself, but to Tibetan culture. Sadly, real Tibetan culture is more likely to be found outside Tibet, in places where refugees continue their Buddhist practices, festivals and way of life in exile – in India, Nepal and Bhutan.

Travel to Tibet raises important ethical questions. One of the biggest is: should you go? Should you put money in Chinese coffers, thus indirectly subsidising Chinese military bills in Tibet? Most of the tourist business is in the hands of the Chinese, and some of the travel agencies are run by the military. This raises the thorny question of lending legitimacy to Chinese government operations by visiting, but more important for the Tibetans is the moral support they get from visitors. Your mere presence in Tibet provides a ‘buffer zone’ in an ugly situation between Chinese and Tibetans.

Tourists love monks. This is one of the great anomalies of tourism in Tibet: the monasteries are kept open and operating because of tourist demand to see them. Apart from Himalayan landscapes, the main tourist ‘attraction’ in Tibet is its monks and monasteries, its Buddhist rituals and sutra-chanting. The Chinese really have no difficulty with this – they simply cash in on it. Apart from making a buck out of Buddhism, the Chinese have absolutely no interest in Tibet’s rich culture, its religion or its language. If you go, you line the pockets of Chinese travel agents, hoteliers and airline agents, but if you stay away, you isolate the Tibetans.

The position of the Tibetan exile leadership is to encourage tourism. Addressing this ethical dilemma – to go or not to go – Nobel Peace Prize laureate the Dalai Lama responded to a question posed in Vancouver, Canada, in September 2006, about repression in Tibet: ‘I think you must go [to Tibet] yourself, and spend some time, not only in towns but in the countryside. Go to the countryside, and with a translator, if possible one who speaks Tibetan, if not, then one who speaks Chinese. Go there. Study on the spot. Then I think you will get a real answer.’ He knows that any Western visitor to Tibet will learn of conditions there and of the aspirations of Tibetans, will not fail to be moved by the experience, and will keep the Tibetan issue alive.

The Western tourist trade in Tibet represents a small fraction of the number of visitors going to China. By far the biggest group visiting Tibet is Chinese tourists, flocking to see this exotic corner of the Motherland. According to Chinese figures, over 20 million tourists visit Tibet annually – most of them domestic tourists from big cities like Shanghai, Beijing or Guangzhou. That number is highly exaggerated because the same tourists are counted several times in different locations like Lhasa, Shigatse or Everest. By the year 2020, China expects upwards of 35 million tourists a year to visit Tibet. This gives some idea of the invasive scale of Chinese tourism – the idea is to flood the place. Tourism is a mainstay of the economy in Tibet. Basically, whether you go to Tibet or not comes down to a personal choice, to be weighed by each traveller. If you can resolve the question of ‘should you go?’, the next thing to consider is ‘can you go?’ The Chinese are suspicious – with good reason – of the activities of independent travellers in Tibet, and have shepherded visitors into monitored, higher-paying group tours. Since major upheaval and large-scale protest across the entire Tibetan plateau in 2008, foreign visitors have only managed to gain access to Tibet on group tours. There are ways around this –particularly by visiting the eastern regions of Kham and Amdo, where such travel restrictions do not apply.

There are things you take for granted in Tibet: magnificent snow caps, powerful gushing rivers, hearty nomads, yaks grazing the grasslands under vast open skies. I never imagined I would have to write the following line: that landscape is undergoing drastic change. The Himalayan snow caps are in meltdown mode, due to climate change – accelerated by a rain of black soot from massive coal-burning in both China and India. The mighty rivers of Tibet are being dammed by Chinese engineering consortiums to feed the mainland’s desperate thirst for power. The grasslands of Tibet are being usurped by desert – due to climate change, and to the short-sighted Chinese policy of forcibly removing nomads from the grasslands and settling them in concrete hovels. Even yaks – the iconic creatures of Tibet – are vanishing from central Tibet.

When I first visited Tibet in the mid-1980s, none of this was apparent. This has all come to pass in a few short decades, unfolding right before my eyes. Accelerating the change was the 2006 arrival of the train to Lhasa, making possible a huge influx of Chinese settlers and tourists, and enabling exploitation of Tibet’s resources on a large scale. Extensive mining in Tibet would not be possible without the train to export minerals. Nor would export of Tibet’s groundwater in the form of bottled water. Nor would the construction of new mega-dams on Tibet’s rivers be possible, as the train brings in materials and technology.

I believe it is the guidebook writer’s duty to give the ‘news’ the way it is – the good, the bad and the ugly. Ugly refers to the harsh realities in today’s Tibet. Tibetans live in a climate of fear: they have no say in preventing the reckless destruction of their sacred land. At the very least, a guidebook should give voice to those concerns. Despite these caveats, Tibet remains an extraordinary travel destination. If you delve into the pages of my guidebook to Tibet, you will find pockets of genuine Tibetan culture – places where the Tibetan pulse runs strong.