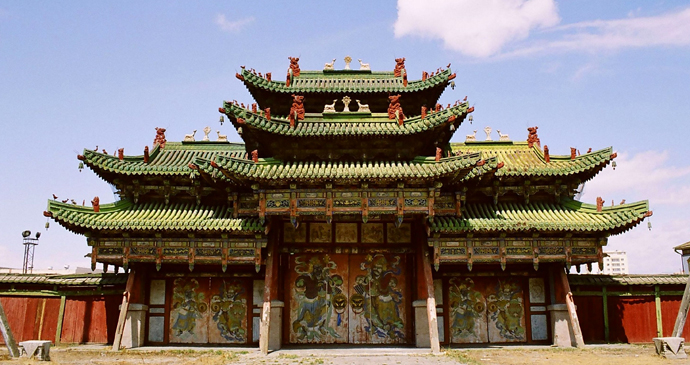 The European-style Winter Palace in Ulaanbaatar was built in 1905 by Tsar Nicholas II of Russia for the eighth Öndör Gegeen, Mongolia’s only religious and political leader, who died in 1924 © yeowatzup, Wikipedia

Mongolia has an extreme continental climate: that is, hot summers and very cold winters. The country lies at the heart of continental Asia, far from seas and oceans, in the lee of surrounding high mountains – all factors that contribute to its dry climate. There is a marked decrease in cloudiness from north to south, where average annual sunshine reaches 3,200 hours. As a result, Mongolia is known as the ‘Land of Blue Skies’.

In winter, the weather is dominated by a stable high-pressure region over northwestern Mongolia; there is little cloud and little snow cover, but intense cold. In spring, warm winds from the south meet cold winds from the Arctic Ocean, and wind and dust storms are typical of this season. Winds are stronger in the southern regions and violent dust storms whip the ground at speeds that could knock over a ger, although these regions are virtually uninhabited. Weather changes can be abrupt and storms can strike with little or no warning.

There is a marked decrease in cloudiness from north to south, where average annual sunshine reaches 3,200 hours. As a result, Mongolia is known as the ‘Land of Blue Skies’.

Precipitation exceeds 500mm a year in the mountains, 200–300mm in the steppe and less than 150mm in the Gobi; 65–75% of annual precipitation falls as rain in the three warm summer months, while autumn is cool and dry. The Khentii and Khövsgöl regions are the wettest parts of Mongolia. Marshes in mountainous areas are sometimes a barrier to summer travel, and drought is not uncommon elsewhere because of low average soil water levels. High mountains are snow-covered from October to April, but elsewhere snowfall is usually not significant and does not accumulate but melts, evaporates or is dispersed by the wind. The most serious condition for animals is zud, which causes massive losses to livestock in severe winter weather.

January is the coldest month of the year, with the average temperature at –35°C in the valleys and –20°C in the Gobi. The lowest recorded temperature was –55°C at Lake Uvs in northwestern Mongolia. July is the warmest month, with the average temperature 15–20°C in the mountains and 20–25°C in the south. A temperature of 40°C has been recorded at Sainshand in the Gobi.  An important consequence of the Mongolian climate, with its hard winters, late spring and early autumn frosts, is the short period of plant growth, which is limited to about 100 days – from late May to the end of August.

Although the Mongolian winter is the longest season, lasting from about November to March, it is also the sunniest.

If you travel in Mongolia during summer time you will have an illusion of richness – knee-deep grass as far as the eye can see and meadows garlanded with millions of wild flowers. But in fact the flora is not as diverse as that of neighbouring China, Siberia or eastern Kazakhstan. In Mongolia, due to the altitude, relief and wind, there is considerable diurnal variation in temperature which may fluctuate by up to 30°C. You may experience blistering hot days and chilly or freezing nights – days that warm up and cool down equally dramatically as the sun rises and sets.

Although the Mongolian winter is the longest season, lasting from about November to March, it is also the sunniest. Throughout the year the skies are blue and the sun shines for over 250 days. There are four distinct seasons, each with its own special attraction. In winter, because of the dry air, there is a crisp atmosphere, even when the sun is out and the daytime temperatures rise; without the damp chill factor even the cold seems less biting. Beware though, when the sun goes down, the temperatures plummet, so you have to wrap up well at night.

Spring can be cool, windy, dusty and changeable. Summer is short, hot and sometimes rainy. The warm October days in autumn are the finest, with ideal temperatures, when the lowering sun casts long amber shadows across the craggy boulders that tower above the burned, summer grasslands. Overall, Mongolia is a very dry country, and the almost continuous blue skies help you feel on top of the world. However, bring warm clothes – even in summer. These are, of course, essential in winter when temperatures drop to –30°C.

The focus of Mongolia’s tourism is nature and the environment, the nomadic way of life and places linked with Genghis Khan. In the final decade of the 20th century this ‘last place on earth’ opened its doors to the world and, with air travel and the advantages of the internet, Mongolia is, virtually, a step away.

Summer (including the short spring and early autumn) is the main Mongolian tourist season, starting in May and ending in September (sometimes until mid October if the weather holds). However, Mongolia now offers a winter holiday season, which includes some skiing. A Swiss-owned downhill ski resort, Sky Resort (www.skiresort.info/ski-resort/ulaanbaatarsky-resort), is located in the Bogd Khan Uul, some 13km outside Ulaanbaatar: it uses man-made snow, has nine runs with two chair lifts and evening skiing is floodlit from 18.00–22.00. This is a far cry from the original use of overland skis by Kazakh Mongol hunters in the Altai border areas of western Mongolia, as seen in rock paintings. It is notoriously difficult to date petroglyphs, but according to some scientists they could be as early as 8,000 years ago but are more likely dated around 3,000 years ago.

In the final decade of the 20th century this ‘last place on earth’ opened its doors to the world and, with air travel and the advantages of the internet, Mongolia is, virtually, a step away.

Most people would not choose to visit Mongolia in the depths of winter, but it is an interesting season to travel, bearing in mind that arrangements are equally limited by the weather. Tourists visiting in winter must be prepared to wrap up warmly as the temperatures drop to below –35°C. Central heating is turned up so high in the major hotels and offices that it reaches tropical temperatures indoors. The solution is to dress in light layers (eg: silk, cotton and wool) and to keep furs, gloves and hats handy when nipping outside.

There are so few tourists that you will get wonderful individual attention, especially if your visit coincides with Tsagaan Sar, the New Year festival – held between January and March, depending on the Mongolian moon calendar. Winter journeys need special planning. There is the possibility of skating on frozen rivers or heli-skiing, if you are super adventurous and prepared to fund it. Bring warm clothes and appropriate boots; otherwise, the thick felt boots worn by Mongolians are best and a Mongolian fleece-lined deel (the local winter attire) can be purchased on arrival. Several tour companies offer winter travel, especially to the Ice Festival held annually in March on and around Lake Khövsgöl. 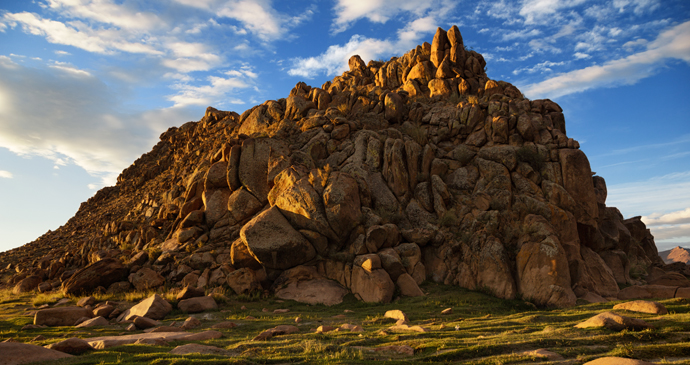 Mongolia has an enormous amount to offer visitors, from tumbling waterfalls to the wide-open spaces of the fenceless steppe, not forgetting around 250 days of sunshine a year, while foreign investors may find more allure in Mongolia’s mineral wealth – copper, gems, gold and oil. The country’s major strengths are its unspoiled countryside, with natural beauty on a colossal scale, immeasurable steppes and unbelievable hospitality, such that the word takes on a new meaning.

Mongolians are people of the moment, fun-loving as well as hospitable, and their outlook is ‘come what may, let tomorrow look after itself’.

The generosity and kindness of ordinary Mongolians is overwhelming and ger hospitality is legendary. Your eyes might scan the horizon and, sharpening focus, might see nestled together in the dip of a valley, or in some strategic place out of the wind, a tiny collection of gers (Mongol tents), set against an awe-inspiring background of mountains and river valleys. It is a land that invites exploration – a vast land of undisturbed beauty and wilderness areas, sparsely inhabited by some of the last nomadic people on earth.

Boundless space, like the ocean, encourages the visitor to relax. Bumped around in the back seat of a Russian jeep on Mongolian roads you have no other choice or, if you ride on horseback or camelback for hours across country, relaxation becomes a matter of survival, otherwise you are liable to do some damage, or, more seriously, if pitched off, break bones. To experience the reality and to fully understand Mongolia’s attractions, contradictions and surprises you must travel there and see for yourself. Mongolians are people of the moment, fun-loving as well as hospitable, and their outlook is ‘come what may, let tomorrow look after itself’.

At a glance you will find the following activities in the different regions of Mongolia:

• North Around Lake Khövsgöl there is riding, fishing, Tsaatan (reindeer people – an ethnic minority living in wigwams, but difficult to reach), wildlife of the forest and steppe. For Bronze Age archaeology there are deer stones in the Khövsgöl region.

• West In Kazakh country are the Kazakh minority people, hunting for foxes and rodents with trained eagles, mountain peaks for climbers, wonderful wild landscape, argali sheep and other wildlife.

Use the following as a broad indicator of what and how much can be done during visits of varying lengths:

• A weekend Visit Ulaanbaatar, with its restaurants, theatres, museums and temples.

• Ten days–two weeks Visit countryside areas – fly/drive between provincial centres. Fly to Khovd, capital of Khovd Aimag, meet your horse and saddle up for a riding experience. Hike and climb in the mountains, staying in tented camps or in local herders’ gers, before returning to UB to explore the capital’s museums, restaurants, bars and nightlife.

• Three weeks A good length of stay. Allows time to visit the countryside – to ‘do’ the Naadam Festival and to travel the ‘Golden Circuit’ (Khövsgöl, the Orkhon Valley and the South Gobi). After arriving and winding down in UB for a night, you could set out by jeep for Lake Khövsgöl, via Amarbayasgalant Monastery. Spend several days camping and exploring the country on horseback. Drive south to Kharkhorin and visit the famous monastery of Erdene Zuu, nearby. If there is time, you might extend your journey to the South Gobi, by flying to Dalanzadgad (from Ulaanbaatar – it’s the only way) and visiting its major sites including the Flaming Cliff area, famous for dinosaur fossil finds. On your final return to Ulaanbaatar, allow a day to shop and see the city.

• Two to three months Time required to travel the country properly – you can do it in six weeks, but you should be aware of certain shortcomings regarding Mongolian roads (or lack of them) and the availability and quality of transport and communication, especially in more remote areas, as they may have an impact on your plan.