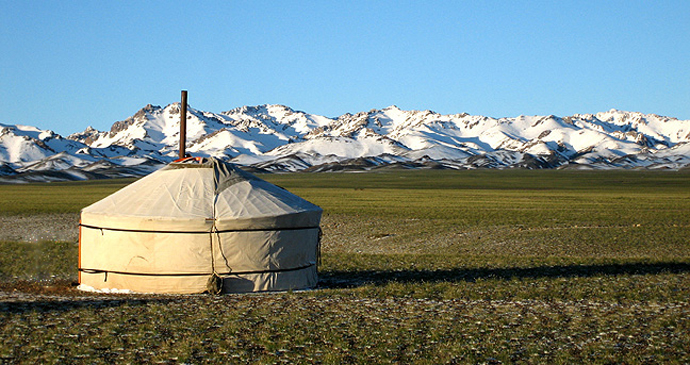 Outside Ulaanbaatar, by far the best option for accommodation is to stay in ger camps; pictured: a traditional ger with the Gurvan Saikhan mountains in the background © Adagio, Wikipedia

Traditional Mongolian food has two main ingredients – meat and flour, in some shape or form. The most popular dishes are buuz (small, steamed meat dumplings) and huushuur (flat meat-filled fried pancakes). There are also soups, plain steamed buns (mantuu) and salads (usually potato, cabbage or carrot), although increasingly green-leaf salads are finding their way on to menus. Mongolia is becoming a nation of urban gardeners (at least in the capital), producing lettuce on 30,000 private vegetable plots, much to the surprise of visitors who expect all Mongolians to be carnivores. In the past, Genghis Khan and his warriors survived on meat but many people forget that in ancient times, as well as today, Mongolians have supplemented their protein diet with local herbs and greens when they could find, or grow, them!

Out of necessity, Mongolians have found creative ways to use the milk of sheep, cattle, goats, camels and horses. Öröm is clotted cream; aaruul are the dried curds seen soaking up the sun on the ger tops in summer; and tsötsgii is cream. Tarag is a delicious sour-tasting yoghurt drink. Shar tos is made from melted butter and tsagaan tos is a mixture of boiled öröm with flour or fruit. Dried products are prepared during spring and summer to last over the long winter. One speciality is to cook the whole carcass of a goat, filling it with hot stones and roasting it on a spit over an open fire. Whole marmot is cooked in the same way.

Mongolia is becoming a nation of urban gardeners (at least in the capital), producing lettuce on 30,000 private vegetable plots, much to the surprise of visitors who expect all Mongolians to be carnivores.

Meat is usually mutton, boiled, fried in pancakes or served as dumplings. It can be fatty and taste strongly of sheep but it supplies the vitamins that are needed. A variation on this is borts – dried meat, usually beef and sometimes goat or sheep – similar to the South African biltong. It will keep for months and can jazz up otherwise dreary rice and noodles. The soldiers of the Mongol Empire used to keep dried meat under their saddles and chew a piece of it as they rode along. The strips of meat are incredibly dry and brittle but will soften up if broken into manageable pieces and stewed in boiling water. Beware of toothache if a piece of meat is trapped between your teeth. Travel with a good supply of strong toothpicks. During the summer, most families in the countryside dry large quantities of meat in preparation for the winter and, if asked politely, will be happy to sell you some.

Summer in Mongolia is known as the ‘white season’ and herders and nomads work around the clock to process milk – turning it into cheese and a variety of other products to last them through the winter. Rock-hard curd, fermented mare’s milk, distilled milk resembling vodka (arkhi), soured cream, milk skin – the list is endless. Fermented horses’ or camels’ milk, known as koumiss or airag, is, most definitely, the most popular – a slightly fizzy, cheesy beverage which is both refreshing and thirst-quenching after a long day’s ride. However, it is important not to overdo the intake of dairy products, as travellers are known to become ill. Mongolians attribute the problem to foreigners’ guts!

When planning your itineraries from base camp it is well to know that there are very few hotels of top/medium standard outside Ulaanbaatar. People rely on ger accommodation – which is excellent – or they camp. A standard cost for camping in Mongolia in ger accommodation is around US$20, plus meals (breakfast US$6, lunch US$10, supper US$9) – in total around US$50 per person per day. Near Ulaanbaatar this may increase to around US$120pp for accommodation and meals.

In the bigger towns and cities there are some new hotels, and older ones are being upgraded. Note though, many do not have constant water, food and heating. Outside Ulaanbaatar by far the best option is to stay in ger camps. These have been set up in the most popular places to cater for travellers, both Mongolian and foreign. Most of the camps run during the summer only; in some camps gers are taken down in October until the following spring. This depends on the weather. However, there are ger camps near Ulaanbaatar which are open all year round and are used by hikers or cross-country skiers during the winter.

These traditional gers have brightly coloured furniture and a wood-burning stove in the centre (if it’s cold they provide wood). Each ger has two, three or four beds. Most camps have a toilet and shower block nearby with hot water some or all of the time. Nearly all camps have a restaurant (often itself a large ger) where they serve Mongolian and European food. Vegetarians have to give the cook plenty of notice or they’ll end up with the same as everyone else but minus the meat.

Outside Ulaanbaatar by far the best option is to stay in ger camps. These have been set up in the most popular places to cater for travellers, both Mongolian and foreign.

The cost of staying in a ger varies around US$45 or US$65 per night and includes three meals. They’ll often pack a picnic lunch for you if you ask, which is useful since you may be several hundred miles from the nearest shop. At some places you can make a deal just to pay for the bed (anything from US$10+, a separate ger will cost around US$30) and then you can bring your own food or just choose what you want from the restaurant menu and pay accordingly.

The gers are a really enjoyable and authentic form of accommodation; they are also warm in the winter and cool in summer. The main disadvantage is trying to book beforehand, and also you can’t be sure of the standard of service until you get there. New ger camps are springing up all the time, and unprofitable ones closed down. At the height of the tourist season some camps are full, and at other times there may be no food or staff if they are not expecting you. The best way round this is to book through a local travel company, who would have the most up-to-date information on new camps and non-existent ones. It would be quite irritating to drive for several days on bad roads to reach a particular ger camp, only to arrive to find it gone!

It’s worth saying that the availability of contact telephone numbers is patchy – ger camps in the countryside don’t generally have telephones on site for public use. People use their own mobile or satellite phones. Sometimes there are several ger camps owned by different companies situated in the same area (eg: Moltsog Els).

These hotels are often pretty tatty and you cannot always rely on the services of food and water – often because of matters beyond the hoteliers’ control, such as transport, the availability of items, delivery because of weather conditions and so forth. Standard country hotels cost from T20,000–100,000 per person per night.

It’s worth saying that in the countryside the accommodation needs of most tourists are catered for by tour companies, which arrange for them to stay in ger camps. Backpackers may need small hotels, but they usually prefer to camp or stay at private gers. Hotels in the countryside therefore tend to be back-ups should other arrangements fail, although they are improving in quality. Note that booking small hotels in the countryside direct is not recommended – it is better to go through a tour operator in Ulaanbaatar. You can try to contact hotels yourself, but note that answers may arrive too late, or not at all.

Camping in the countryside

Most tour companies provide camping gear – everything you are likely to need. Otherwise, as an individual traveller you will need to bring your own equipment. You can camp almost anywhere in Mongolia; the choice is vast – but you will need permission within national parks from offices, locally, or in advance from the head office in Ulaanbaatar. If you want to use ger camp or hotel facilities, it is polite to ask and possibly there will be a small fee.