The newly independent state of Kazakhstan emerged out of the former Soviet Union in 1991 as the ninth-largest country on the planet. It stretches from the snow-capped peaks of the Tian Shan and Altai mountains in the east, across great expanses of wormwood-scented steppe to the Caspian in the west. It may have been the birthplace of the apple, and the tulip. Yuri Gagarin, the first human into space, started his journey from the Baikonur Cosmodrome in the south of the country. Rich in natural resources, Kazakhstan is a major supplier of oil and of a huge range of minerals. It is continuously and redefining its modern capital Astana, whose monuments include a pyramid-shaped Palace of Peace and Reconciliation and a huge transparent tent that covers a beach, golf course and even gondola-filled canals. Both were designed by British architect Norman Foster. 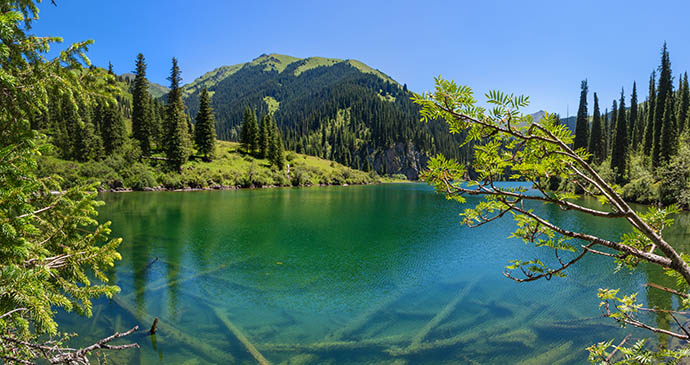 For those wanting to know what Kazakhstan is actually like, there has never been a better time to come. Keen to attract more visitors, the Kazakhstani authorities have progressively eased the red tape surrounding visits to the country. From 1 January 2017, citizens of the United Kingdom, EU countries, USA, Canada, Australia and New Zealand, as well as a number of other countries, no longer require a visa for a 30-day stay in Kazakhstan.

The number of good hotels around the country is increasing fast, and the largest cities now boast a wide range of restaurants and a lively and varied nightlife. Some forays have been made into the provision of community-based tourism, offering the chance to stay with Kazakh families in beautiful mountain and lakeside villages. The varied natural environments of Kazakhstan offer excitements for ornithologists in search of the black lark or sociable lapwing, botanists looking for some of the richest diversity of wild tulips to be found anywhere and fishermen dreaming of a 200lb catfish, with specialist tour operators offering packages based around all of these interests.

Much of Kazakhstan was controlled by a long succession of nomadic peoples. Their legacies include artefacts recovered from places of burial, including the beautiful and intricate suit of the so-called Golden Man, comprising thousands of pieces of gold, uncovered from a burial mound of the Scythian period near Almaty. The northern route of the Silk Road ran through the southern part of the country, nurturing important cities. In one, Turkestan, Kazakhstan’s most magnificent building is to be found, the turquoise-domed mausoleum of the Sufist spiritual leader Khoja Ahmed Yassaui. The neighbouring city of Otrar, living on today as no more than an archaeological site, has a somewhat unfortunate claim to historical fame as the place in which the ill-considered actions of the city governor brought the predations of the Mongols of Genghis Khan on to central Asia.

The open spaces of Kazakhstan were the setting for several dark historical episodes during the Soviet period, when leaderships were at times all too inclined to view the country essentially as empty space that could be utilised for some of the less savoury tasks required by the Soviet Union. Political and other prisoners were detained in the numerous GULAG labour camps across the steppes of Kazakhstan. Whole peoples, including Germans, Koreans and Chechens, were deported here during World War II under the orders of Stalin, who wanted to keep the groups whose loyalty he questioned away from the front lines. At the Semipalatinsk Test Site, 456 nuclear explosions were carried out between 1949 and 1989 at an appalling cost to the health of the local people. The desiccation of the Aral Sea was no environmental accident, but the result of a deliberate policy to boost the area irrigated for cotton production in central Asia.

Following a difficult economic transition post-independence, Kazakhstan has, since the dawn of the new millennium, experienced an economic boom on the back of high world prices for its oil and minerals. It is an increasingly prosperous and self-confident country. Range Rovers and sushi bars are part of the urban architecture of Almaty and Astana.

A multi-ethnic country that straddles two continents, Kazakhstan is an expression of a Eurasian ideal. But ethnic Kazakhs are also proud of their nomadic heritage, although nomadism as a way of life was largely a victim of the collectivisation of the late 1920s. An invitation to a traditional Kazakh meal, which may even be held in a yurt, is not to be missed. When presented, as honoured guest, with a sheep’s head for division among those around the table, the music of the dombra playing in the background, and your host solicitously enquiring as to whether you would prefer mare’s or camel’s milk, the exoticism of this fascinating land makes itself most clear. Kazakhstan offers the visitor a wide and rewarding range of travel experiences.

One trip, which for me summarised both the challenges and fascinations of tourism in Kazakhstan, was a local package holiday to the Rachmanov Springs sanatorium in the Altai Mountains. Instructed to turn up outside the ice hockey stadium in Oskemen, I discovered that the tour bus assigned to take us to the mountains was a battered Ural truck of distant Soviet vintage, its passenger cabin daubed with worn paintings of maral deer in a vague attempt to conjure a holiday spirit. The truck proved as reliable as it looked, and broke down in a stunningly attractive spot amid fields of sunflowers, with the waters of the Bukhtarma Reservoir glinting below us. The driver’s admission that he possessed not the first idea about vehicle maintenance appeared not to faze my fellow passengers. With the air of a group undertaking an annual holiday ritual, the men started on the business of dismantling the engine, banging various components with a hammer in an eventually successful effort to induce life. The women produced sandwiches and a jar of pickled cucumbers, and a miner from Zyryanovsk opened the first of what appeared to be an inexhaustible supply of vodka bottles. Glasses and plastic beakers were passed round to all the passengers, mine accompanied by the only two words of English I ever heard him speak, though which he was to use frequently during the holiday: ‘Little drink?’