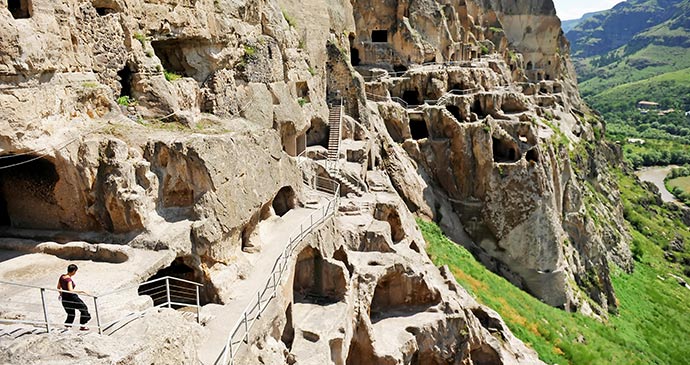 Vardzia is particularly popular during the summer months © roibu, Shutterstock

Vardzia is the site of the most famous cave-city in Georgia, a place of almost mystic importance for most Georgians.

Having been in a closed border zone throughout the Soviet period, Vardzia is now receiving plenty of visitors, especially in summer. It’s said that its name derives from ‘Ak var, dzia’ or ‘Here I am, uncle’ – Tamar’s call when lost in the caves. First established by King George III in 1156 and consecrated in 1185, his daughter Tamar made it into a monastery, which became the chief seminary of southwestern Georgia (housing 2,000 monks) until an earthquake ruined it in 1283, slicing away a large portion of the rock face. Another quake in 1456 was followed by a Persian army in 1551 and the Turks at the end of that century, so that now around 600 chambers survive of a total 3,000, which included stables, barracks, bakeries, wine presses and stores. Likewise, only half a dozen levels remain of the 13 which once penetrated 50m into the cliffs.

Below the cliffs is a bell-tower (built after the 1283 earthquake), the refectory, and the Church of the Assumption (1184–86), the pivotal point of the complex. This contains a famous fresco of Tamar (one of just four painted in her lifetime) and her father, together with what seems to be an Annunciation but for the fact that the Virgin already has the child Jesus on her knee. Down a dark tunnel is the pool known as ‘Tamar’s Tears’, where the water is beautifully cool and sweet.

Returning outside, you can explore the rest of the city more or less at random; some of the chambers are interconnected, but thanks to the earthquakes most of them are now open to the outside world. There are a few frescoes, although most of the chambers are smoke-blackened; what are more interesting than the walls and ceilings are the floors, which are pitted with a surprising array of channels and receptacles for water and, of course, wine.