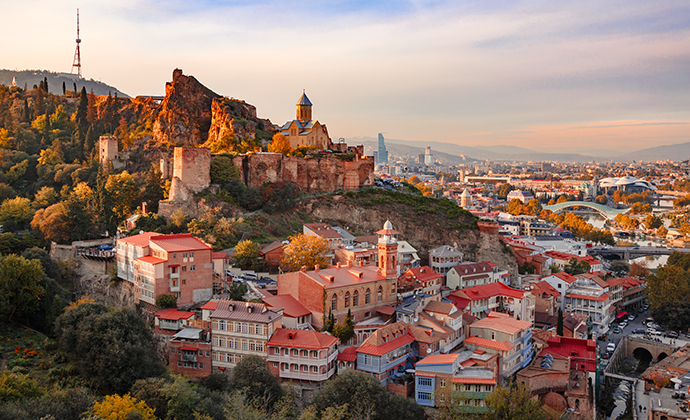 Inhabited at various times by Persians, Tatars, Jews and Armenians, the heart of the Georgian capital is an intriguing array of architectural styles © MiGol, Shutterstock

Georgia’s capital is an intoxicating blend of cultures, both ancient and modern.

Tbilisi lies at about 380m altitude, on the same latitude as Rome, Barcelona, Boston and Chicago. It stretches for 20km along the River Mtkvari (the Kura in Russian), with mountains on three sides: Mtatsminda to the southwest, Mount Tabori and the Solalaki Ridge to the southeast, and the low undulating Makhat Ridge to the northeast, beyond which is the so-called Tbilisi Sea, now a reservoir, and then the Samgori steppe.

Perhaps the most evocative accounts of Tbilisi come from the 1930s, because of the contrast it offered to the rest of the USSR: the author Arthur Koestler said:

I loved Tbilisi more than any other town in the Soviet Union, perhaps because it was still so untouched by the drabness and monotony of Soviet life. The town has an irresistible charm of its own, neither European nor Asiatic, but a happy blend of the two.

Republic Square (now officially known as ‘Rose Revolution Square’) has plenty of restaurants, bars and cafes in its immediate vicinity. Many of Tbilisi’s most popular bars can be found along Akhvlediani Street (still best known as Perovskaya) and Kiacheli Street. Most of them offer food of some type, although it tends to be a featureless blend of Georgian and international styles.

The Old Town of Tbilisi (the Maidan or Kala) lies higgledy-piggledy on the crowded slopes between the river and the citadel of Narikala. Here, in an area inhabited, at various times, by Persians, Tatars, Jews and Armenians, you can visit a mosque, a synagogue, and Armenian and Georgian churches, all still in use. 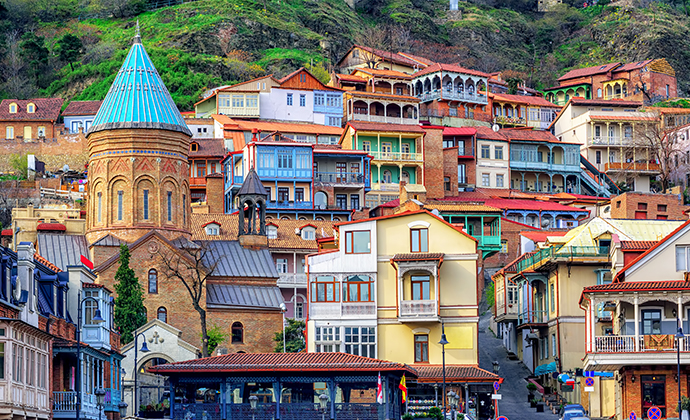 The Old Town lies higgledy-piggledy on the crowded slopes between the river and the citadel of Narikala © Boris Stroujko, Shutterstock

The Carvasla, built in 1650 as a trading centre for visiting merchants then rebuilt in 1912 with an Art Nouveau facade, now houses the Museum of the History of Tbilisi. The interior seems like classic 1980s architecture, in fact very similar to the Metechi Palace Hotel, with a high atrium and three galleries overlooking a cafe by a fountain, which was once a drinking pool for pack animals. If you happen to pass its rear, on the Mtkvari embankment, you’ll see two sculpted griffons, with three of their four wings missing.

The Sioni cathedral is a typical domed Georgian church built in the 13th century of tuff stone from Bolnisi, and nothing special architecturally. However, it is the centre of religious life in the city, partly due to the presence of St Nino’s cross, which she made by binding two vine branches together with her own hair (hence the drooping arms of the Georgian cross); a replica is displayed to the left of the iconostasis, but it’s hard to see much as even this is in an ornate early 14th-century reliquary.

Nowadays Tbilisi is far more crowded and hectic than it was then, but its mix of ancient churches next to hip restaurants and of old ladies in black shuffling home from the market alongside young people with ripped jeans and the latest phones give the city a very specific allure.