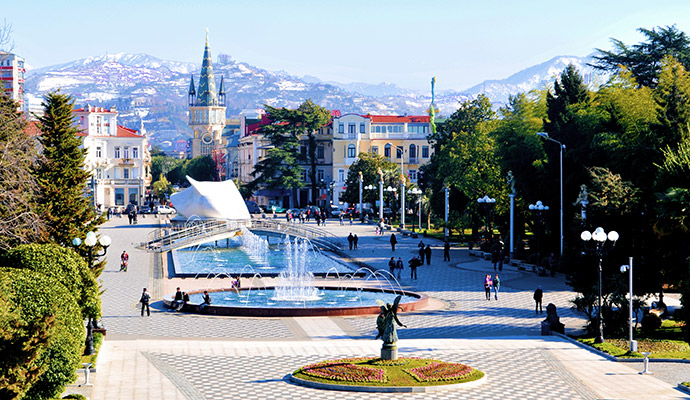 Georgia’s liveliest town, this port and seaside resort is the country’s most up-and-coming development.

Batumi, with its sheltered natural harbour, existed as a Greek trading colony by the start of the 2nd century BC at the latest. Under Turkish rule it was never anything more than a tiny fishing village, but once the Russians arrived in 1878 it began a very rapid development. Now it’s a city of around 130,000 people, and handles a great deal of trade with Turkey, both by land and sea. Its name is probably derived from the Greek words bathys limen (deep harbour).

From 2009, the Saakashvili government used an array of incentives to trigger a building boom aimed at turning Batumi into the Las Vegas of the Black Sea. The new architecture is glitzy, verging on kitsch, particularly around Evropus Moedani (Europe Square) and especially all along the seafront, from the towers in Miracle Park to the New Boulevard well south of the city. The Sheraton and Radisson hotels, built in 2010 and 2011, are now dwarfed by the Porta and Technical University towers, although plans for Donald Trump to co-finance, with the Silk Road Group, a Georgian ‘Trump Tower’ development have so far come to nothing. The city is a popular destination for Turks, Arabs and Iranians, and their languages, and Russian, are more obvious here than English – whereas Tbilisi seems to be oriented towards Europe, Batumi is closer to Beirut or Dubai.

In 1990 the city covered 18km2, but it now sprawls over 65km2, with very high levels of car use and just 0.3% of the population cycling, and unsurprisingly congestion and pollution have become serious problems; a Sustainable Urban Mobility Plan is being developed, and cycle lanes are appearing across the city.