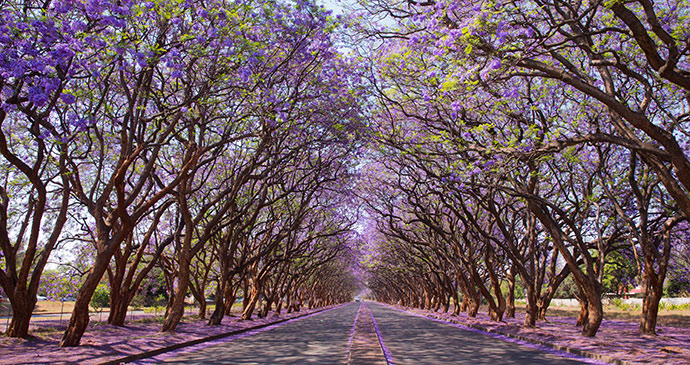 Many of Harare’s wide streets are lined with blooming jacaranda and other flamboyant trees © Jez Bennett, Shutterstock

Harare enjoys a thriving arts scene with galleries and museums, trendy restaurants and nightclubs; in fact pretty well everything you would expect in a capital city.

Harare is one of the most laid-back capitals in the world. With so many great restaurants, friendly and helpful citizens, easily accessible tourist sites and fabulous accommodation options, it remains a favourite ‘best-kept-secret’ diplomatic posting for many embassy staff, despite their generous ‘hardship’ allowances.

After the difficult decade of 2000–2009, and following the introduction of the unity government, Harare’s tourism sector began to pick itself up with a degree of optimism. But that effect was temporary and was soon to be superseded by the rapidly deteriorating economic situation which saw many businesses fall by the wayside, and the desperate water and power supply situation was only making matters worse. Even now though, Greater Harare (estimated population 2.2m) is a very pleasant town with plenty of parks and open spaces, wide streets lined with jacaranda and flamboyant trees, and pedestrian areas with upmarket shops and craft markets. It enjoys a thriving arts scene with galleries and museums, trendy restaurants and nightclubs; in fact pretty well everything you would expect in a capital city. But today you can’t help noticing the general feeling of decline in parts of the CBD. Traffic congestion, together with the closing down of many shops and restaurants and an increase of informal traders, has turned Harare into a city of two parts. The wealthy folks are still in town but over the years they have migrated to the leafy suburbs to the north where you’ll be surprised at the obvious affluence reflected in the beautiful private properties and the upmarket shopping centres that service them.

The city centre still has some attractions of interest to the visitor but generally speaking you’ll be drawn to the suburbs such as Avondale and Borrowdale for the best accommodation, shopping and dining.