Situated squarely in the tropics, Zambia gets a lot of strong sunlight, though the intense heat normally associated with the tropics is moderated in most places by the country’s altitude and its rainfall. The climate is generally moderate; only in the great valleys does it feel oppressive. It can be summarised broadly into three periods: from December to April it is hot and wet, with torrential downpours often in the late afternoon; from May to August it is dry, and becomes increasingly cool; and from September to November it remains dry, but gets progressively hotter.

This follows a similar pattern to that in most of southern Africa, with rainfall when the sun is near its zenith from November to April. The precise timing and duration of this is determined by the interplay of three airstreams: the moist ‘Congo’ air-mass, the northeastern monsoon winds, and the southeastern trade winds. The water-bearing air is the Congo air-mass, which normally brings rain when it moves south into Zambia from central Africa. This means that the northern areas, around Lakes Tanganyika and Mweru, receive the first rainfall – often in late October or November. This belt of rain will then work south, arriving in southern Zambia by the end of November or the start of December.

As the sun’s intensity reduces, the Congo air-mass moves back north, leaving southern Zambia dry by around late March, and the north by late April or May. Most areas receive their heaviest rainfall in January, though some of the most northerly have two peaks: one in December and one in March. This twin-peak cycle is more characteristic of central and eastern Africa. The heaviest total rainfall is found in the north, and the lightest in the south. It’s worth adding a caveat here. Zambia, as elsewhere, is experiencing fluctuations in its traditional weather patterns, so while the traditional pattern remains a good guide, be prepared for variations from the norm.

Many of Zambia’s tourists come during the dry season, with the peak being August to early October. Zambia’s small camps and lodges ensure that it never feels busy, even when everywhere is full. Others visit early or late in the season – May to July or November – because the camps are quieter and often costs are lower. The dry season (May to November), when you are unlikely to meet rain and can expect clear blue skies, is the easiest time to travel. It is ideal if this is your first trip to Africa, or if seeing lots of big game is top of your wish list.

June to August are the coolest months, then from September onwards the heat gradually builds up. Note, though, that where the altitude is relatively low – like the Luangwa, the Lower Zambezi Valley or Lake Tanganyika – the temperature is always higher. These places, especially, can get very hot towards the end of October, and occasions of over 40°C in the shade in the middle of the day have earned October the tag of ‘suicide month’ amongst the locals.

November is a variable month, but many days can be cooler than October, as the gathering clouds shield the earth from the sun. On some days these bring welcome showers; on others they simply build, and with them come tension and humidity. It’s always an interesting month.

A small but increasing number of visitors come during what’s known as the ‘emerald season’, from December to April. While the likelihood of rain means that this isn’t for everybody, it remains a fascinating time of year to visit. The camps that open then will often be quiet for days. Their rates can be much lower, and they’re often far more flexible about bringing children on safari.

At this time of year, the days can vary enormously from one to the next. Even within a day, skies will often change from sunny to cloudy within minutes and then back again. Downpours are usually heavy and short, and often in the late afternoon. Even in the lower valleys, temperatures are pleasant, rising to only around 30°C, and the nights only slightly cooler (typically down to perhaps 15°C). You will need a good waterproof for the rainy season, but it seldom rains for long enough to really stop you doing anything. Except travelling on bush roads … 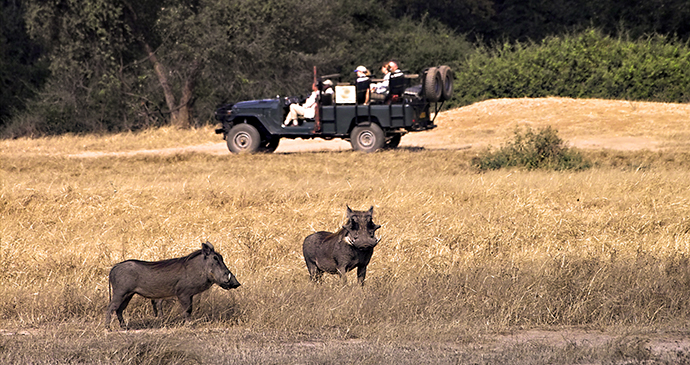 If game viewing is your priority, or this is one of your first trips to Africa, then the animals are much easier to spot when it’s dry, as no thick vegetation obscures the view. Further, they are forced to congregate at well-known water points, like rivers, where they can be observed. Many more tracks are navigable in the bush, and so more areas can be explored by vehicle. So if you want to see large numbers of animals, then do come to Zambia in the dry season – and later rather than earlier if possible.

A few specific animal highlights include:

• February–May Most of the herbivores are in their best condition, having fed well on the lush vegetation.

• May–August Leopard are generally easier to see, as they come out more during the twilight hours. Later in the year they often come out later in the evening, waiting until it is cool.

• October–December Crocodiles are nesting, so are found on or near exposed sandbanks.

• November The great wildebeest gathering masses on Liuwa Plain, in western Zambia. It’s still accessible by 4×4 at this time of year, but you’ll need a small expedition to witness it.

• November–March Baby warthogs and impala start to appear in November, followed by most of the mammals that calve sometime during the rainy season. 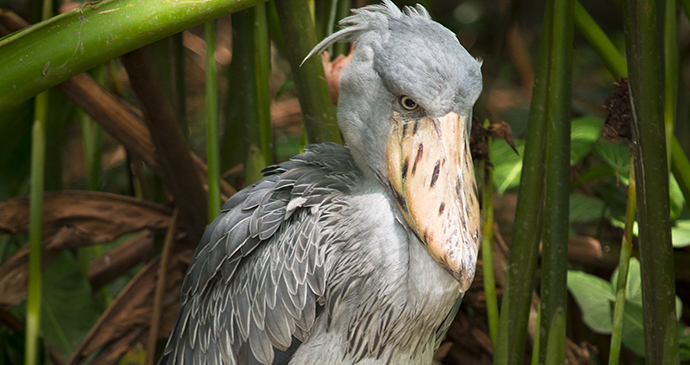 The birdlife in Zambia is certainly best when the foliage is most dense, and the insects are thriving: in the wet season. Then many resident birds are nesting and in their bright, breeding plumage. This coincides to a large extent with the ‘summer’ period, from around October to March, when the Palaearctic migrants from the northern hemisphere are seen. Certainly in terms of waterbirds – storks, herons, ducks, geese and the smaller waders – the rainy season (and just after) is an infinitely better time to visit. The birding calendar’s highlights include:

• March–July Large breeding colonies of storks and herons gather to breed. The only sites I know are in the Nsefu Sector of the South Luangwa National Park.

• August–October ‘Fishing parties’ of herons, egrets and storks will arrive at pools as they dry up, to feed on the stranded fish.

• November–April Most of the weavers are in breeding plumage.