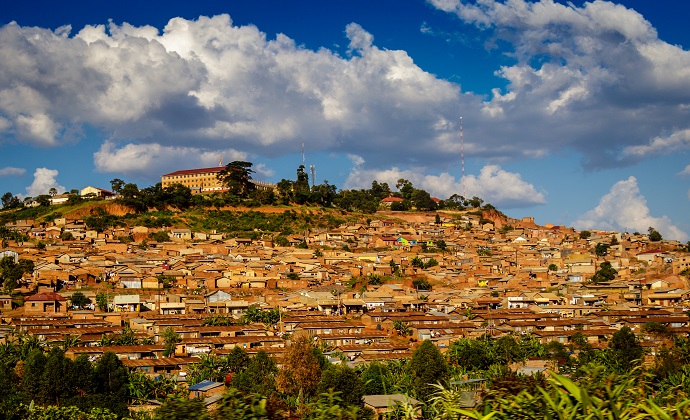 Once the centrepiece of East Africa, this stereotypical African capital has the familiar juxtaposition of a bustling compact high-rise city rising from a leafy suburban sprawl.

Extending over a series of rolling hills and swampy valleys at the head of Lake Victoria’s Murchison Bay, Kampala, the economic and social hub of Uganda, is the archetypal African capital – more verdant than many of its counterparts, not quite so populous or chaotic as others – but essentially the familiar juxtaposition of a bustling compact high-rise city centre rising from a leafy suburban sprawl, increasingly organic in appearance as one reaches its rustic periphery.

As a city, Kampala’s history dates back to the arrival of Captain Frederick Lugard, who established his camp on the stumpy Kampala Hill in 1890. However, the more prominent of the surrounding hills had already been used by the Bugandan kabakas for their kibugas (citadels). Kasubi Hill, only 2.5km northwest of the modern city centre, served briefly as the capital of Kabaka Suuna II in the 1850s, and it also housed the palace of Kabaka Mutesa I from 1882–84, while Mengo Hill formed the capital of Mutesa’s successor Mwanga, as it has every subsequent kabaka. The name ‘Kampala’ derives from the Luganda expression ‘Kosozi Kampala’ – ‘Hill of Antelope’ – a reference to the domestic impala that cropped the lawns of Mengo during Mutesa’s reign.

In the first decade of the post-independence era, Kampala was widely regarded to be the showpiece of the East African community: a spacious garden city with a cosmopolitan atmosphere and bustling trade. It was also a cultural and educational centre of note, with Makerere University regarded as the academic heart of East Africa. Under Idi Amin, however, Kampala’s status started to deteriorate, especially after the Asian community was forced to leave Uganda. By 1986, when the civil war ended, Kampala was in complete chaos: skeletal buildings scarred with bullet holes dotted the city centre, shops and hotels were boarded up after widespread looting, and public services had ground to a halt, swamped by the huge influx of migrants from war-torn parts of the country.

Some 30 years later, Kampala is unrecognisable from the dire incarnation of the mid 1980s. The main shopping area along Kampala Road might be that of any African capital, while the edge of the city centre has seen the development of a clutch of bright, modern supermarkets and shopping malls. The area immediately north of Kampala Road, where foreign embassies and government departments rub shoulders with renovated tourist hotels, is as smart as any part of Nairobi or Dar es Salaam. Admittedly it’s a different story downhill of Kampala Road where overcrowded backstreets, congested with hooting matatus and swerving boda drivers, reveal a more representative face of Kampala – the city as most of its residents see it.

Kampala is not only smarter than it used to be but considerably larger. These days it covers over 200km², as the population has risen from 330,000 in 1969 to over 2.2 million inhabitants today, if one includes the peripheral sprawls of Nansana and Kira – a figure easily ten times greater than any other town in Uganda.