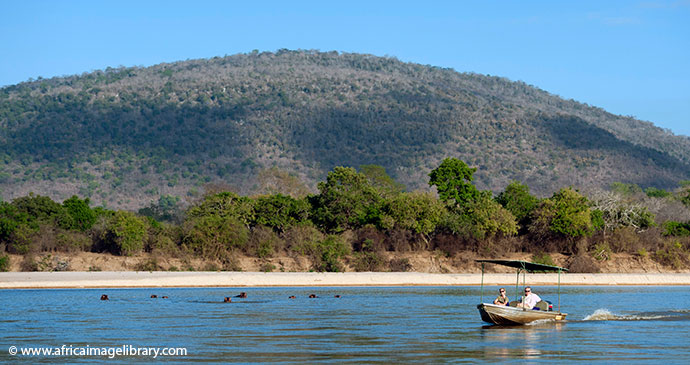 A boat trip on the Rufiji River is a must for any visitor to the Selous © Ariadne Van Zandbergen, Africa Image Library

Dominated by the sluggish Rufiji River, the largest protected area in Africa is renowned for its great boat and walking safaris.

The largest game reserve anywhere in Africa, the 47,500km² Selous extends over thrice the area of Serengeti National Park, and is roughly 50% bigger than either Belgium or Swaziland. It forms the core of Africa’s largest remaining tract of comparably untrammelled bush, the 155,000km² Greater Selous–Niassa ecosystem,
which also incorporates Mikumi and Udzungwa national parks, Kilombero Game Protected Area, and Mozambique’s 23,400km² Niassa Game Reserve. Bisected by the life-sustaining Rufiji River, this vast area of dry woodland supports what are probably the world’s largest surviving populations of buffalo, hippo and lion (estimated at around 150,000, 40,000 and 4,000 respectively), and it is also the most important global stronghold for the endangered African wild dog. As recently as the turn of the millennium, the Greater Selous was also home to around 70,000 elephants, some 10% of the continental total, but a tragic onslaught of commercial poaching has since reduced the population to around 15,000.

Much of the publicity surrounding the Selous hammers on about its vast area, but this is something of a red herring in touristic terms. True, this vast reserve does attract a mere fraction of the tourist arrivals associated with the northern safari circuit. And accommodation is indeed limited to a dozen-or-so low-key camps thatespouse an eco-friendly philosophy and thatch-and-canvas aesthetic, and whose combined bed capacity amounts to a few hundred clients. Yet a quick glace at a map will reveal that these tourist facilities are all compressed within a relatively small public sector to the north of the Rufiji, a reserve-within-a-reserve that accounts for less than 5% of the Selous’s total surface area (with the other 95% carved into private hunting concessions). As a result, the ‘multiple vehicles looking for the same lion pride’ phenomenon is more common in Selous than some would have you believe, especially in the area closest to the Mtemere Gate.

For all that, the public part of the Selous is wonderfully atmospheric, a dense tract of miombo wilderness dominated by the compelling presence of the wide palm-lined Rufiji River and an associated labyrinth of interconnected lakes and channels. Arriving by light aircraft, as most visitors do, you’ll sweep exhilaratingly above green-fringed channels teeming with hippos and waterfowl, swampy islets grazed by immense herds of elephant and giraffe, and exposed sandbanks full of drinking antelope and sleeping crocodiles. And once there, while the variety of large mammals likely to be seen is limited by comparison with, say, the Serengeti or Ruaha, an unusually wide range of activities – guided bush walks, fly-camping around the lakes, and above all thrilling boat trips on the Rufiji – create a far more integrated bush experience than the repetitive regime of two daily game drives typical of other Tanzanian national parks. Be warned, however, that Selous’s wilderness character, and the exposed nature of its rustic camps and lodges, means it is probably better suited to experienced safari-goers than to nervous neophytes.