Eating out in Somaliland tends to be an unceremonious activity, and the food is seldom anything to write home about. Local restaurants generally serve a limited selection of pre-cooked dishes, typically pasta and/or rice with vegetable or meat stew, with the most common meats being mutton, goat and camel. The choice is slightly greater at those moderate and upmarket hotels which have their own restaurant (for information on tipping etiquette, see Tips on Tipping).

In addition, Hargeisa and Berbera have a few adequate standalone restaurants catering to Western palates, with Berbera being a good place to break the regime of red meat with some fresh fish. Eating out in Somaliland may be problematic for vegetarians, since there is no guarantee that the vegetable sauce offered at most local restaurants will be strictly vegetarian (it often seems to contain small bits of meat, and even where it doesn’t, it may well use some sort of meat stock). Outside of Hargeisa, strict vegetarians will most likely have to stick to bread, fresh market produce and whatever tinned items they can locate.

One distinctly Somali dish worth trying is laxoox, a filling pancake-like flatbread traditionally baked on a metallic circular stove called a daawo. It is usually eaten at breakfast with sweet Somali tea, or sometimes eggs, or sugar and lime, or even ghee. Laxoox is clearly a relation of Ethiopian injera, and has a similarly spongy texture, but it is made from wheat rather than tef, is less sour, and much smaller and floppier (you would normally eat three or four individual pancakes in one sitting). Fresh bread, known as roodhi, is also widely available in the mornings, either as a crusty roti-like flatbread mofaa, or more conventional rolls. Also popular are the greasy fried dough balls known as khamiir.There are also several Ethiopian restaurants in Somaliland, especially in Hargeisa, usually serving far spicier fare than is conventional for the Somali.

If you are shopping for a trip into remote areas, supermarkets in Hargeisa stock a fair range of imported goodies such as crisps, biscuits, chocolates and sweets. Elsewhere in the country, the selection is very limited. Fresh fruit and vegetables are widely available at markets. 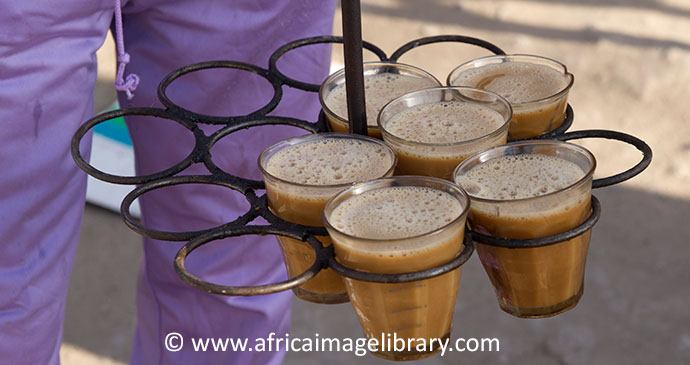 Ask for a bun in Somaliland and you will be presented with a coffee © Ariadne Van Zandbergen, Africa Image Library

Now with its own bottling factory in Hargeisa, Coca-Cola is widely available in Somaliland, as are various other sweet carbonated drinks. You can buy packaged fruit juices in some supermarkets, but a more attractive (and very budget-friendly) option is the delicious freshly pureed or squeezed fruit juices made at stalls and restaurants in the larger towns. Another local favourite is Somali tea, which is often spiced and usually brewed with milk and a generous dose of sugar. If you prefer your tea free of milk and/or sugar, ask for Lipton. Bottled water is available, but make sure it’s sealed. No alcoholic drinks are sold anywhere in Somaliland, although a few smarter restaurants and hotels stock alcohol-free beer.

Accommodation in Somaliland is generally far more varied and pleasant than one might reasonably expect, and by overall African standards it tends to be pretty good value, too.