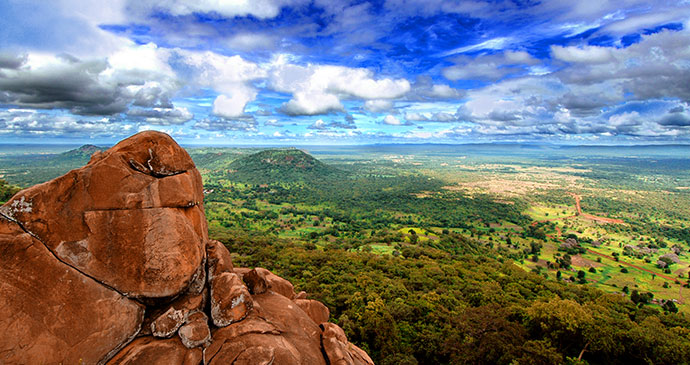 Explore the bush in a 4×4 or paddle upstream in a pirogue at Niokolo-Koba National Park, where lion still run wild.

Inscribed as a UNESCO World Heritage Site in 1981 and ignominiously added to the list of Endangered World Heritage Sites in 2007, Parc National du Niokolo-Koba extends over 9,130km2 of river, savannah and gallery forest southeast of Tambacounda, and represents the largest and wildest area of protected and uninhabited land in Senegal. The habitats here vary between wide expanses of Sudan-Guinea savannah punctuated by riverine stretches of gallery forest, floodplains, marshes and even a few hills towards the southeast of the park, which peak at the rarely visited 311m Mount Assirik. Most of the easily accessed areas of the park lie along the Gambia River, but the park also takes in the rambling watercourses of several tributaries, including the Koulountou and the park’s namesake river, the Niokolo-Koba.

Since 1985, Niokolo-Koba has also been contiguous with Guinea’s much smaller (382km2) Badiar National Park, which lies just across the border to the south (though there are no legal crossings or roads between them). Cut into two uneven halves by the RN7, nearly all tourist activity in the park takes place in the southern section, and the main hotel and ranger station are both located at Simenti (no prizes for guessing the etymology), which sits between an impressive lagoon (mare de Simenti) and the Gambia River, just over 30km into the park from the entrance gate at Dar Salam.