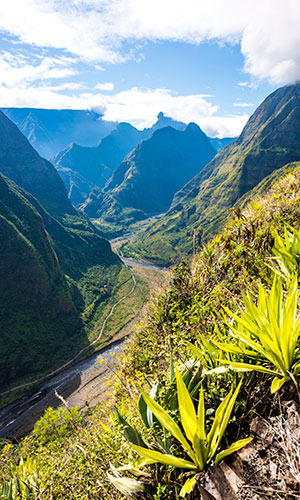 For many, hiking is the reason for visiting Réunion, which boasts over 1,000km of well-maintained trails. The island’s three cirques, formed by the collapse of ancient volcanic craters, are a hiker’s dream, with spectacular mountainous scenery punctuated by thundering waterfalls. Mafate is the most remote of the cirques and only accessible on foot or by helicopter. It can, however, be seen from the spectacular viewpoint at Piton Maïdo. For non-hikers the cirques are still a ‘must-see’, not least for their spectacular scenery and cool, clean mountain air. The cirques of Cilaos and Salazie can be reached by road. The pretty town of Cilaos is set in a basin surrounded by mountains and is known for its thermal springs. Salazie is the wettest and greenest of the cirques, with numerous waterfalls and pretty Creole villages, such as Hell-Bourg, rated one of the most beautiful in France. High on your list of things to do in Réunion should be hiking around Piton-de-la- Fournaise, one of the world’s most active volcanoes – provided it’s not erupting, of course. Keen hikers will also enjoy the two-day climb of Piton-des-Neiges, which can be timed so you arrive at the summit to watch the sun rise over the Indian Ocean. If hiking doesn’t appeal or you are short of time, you needn’t miss out on seeing the interior – helicopter rides over the island are becoming increasingly popular.

Réunion offers all manner of adventure sports and activities – climbing, canyoning, mountain biking, horseriding and paragliding to name but a few. For water-based activities try scuba diving at St-Gilles-les-Bains.

Those seeking culture will be spoilt for choice. The Creole people are incredibly friendly and only too happy to share aspects of their culture with visitors.  Music and dance are central to Creole life. Head to a nightclub in St-Pierre, or a live show, and locals will be glad to teach you to dance the séga, zouk or maloya. You can’t leave Réunion without sampling the delicious Creole cuisine – try cari ti-jacques or rougail saucisses, and follow your meal with a rhum arrangé (fruit-infused rum). There are festivals all year round: highlights include Tamil firewalking ceremonies and the Abolition of Slavery celebrations on 20 December.