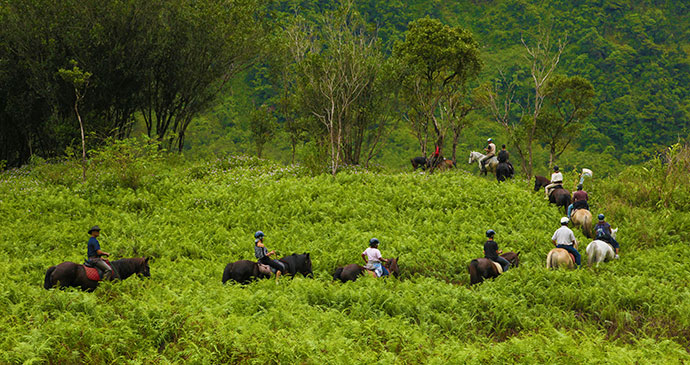 Holders of European Union or Swiss passports do not need a visa for a stay of up to three months but do need to carry a valid passport or identity card. The same applies for nationals of certain other countries, including Australia, the US, Canada, New Zealand, South Africa and Mauritius. Chinese and Indian nationals do not require a visa for a stay of up to 15 days, but to qualify for this exemption need to book their travel as part of a package or through a licensed tour operator in Réunion. For nationalities that do require a visa, note that as Réunion is not part of the Schengen area, a visa for France that does not specify Réunion is not valid. Before you travel, ensure your passport is valid for at least three months after the scheduled date of departure from Réunion. The French Embassy or Consulate in your home country will be able to provide up-to-date information and handle visa applications. All visitors must be in possession of a return ticket.

The majority of visitors arrive by air, from Africa, Europe or other Indian Ocean islands. The main airport is Roland Garros International Airport, which is 11km east of the main town, St-Denis. The airport at Pierrefonds, in the south of the island, used to handle only flights within the Indian Ocean, but now receives some flights from Paris. The only direct flights from Europe to Réunion are from France and take 11 hours from Paris. A number of airlines have introduced flights from regional airports in France. These flights are considerably dearer during high season, ie: French school holidays. If you are travelling from any other part of Europe you will need to fly to France to connect with an onward flight. However, most airlines offer special fares for the flight to Paris if you are carrying on to Réunion. Alternatively, fly to Mauritius and on to Réunion from there.

Réunion’s roads are overcrowded. Driving through towns such as St-Denis and St-Pierre during peak hours can be exasperating. The coastal road between St-Leu and St-Gilles-les-Bains is prone to very heavy traffic and there are invariably long queues around L’Hermitage. A road map, which shows realtime traffic congestion, is available online.

Taxis are generally expensive and not easy to fi nd outside the main towns. Stands are usually situated in town centres, oft en near the bus station or market, and there are stands at the two airports. Th ey don’t tend to hang around looking for passengers in the evening, so you’ll probably need to order one and there is a surcharge for night-time rides.