Busy travellers will find that barely a day goes by without at least one memorable experience, be it swimming below one of the gorgeous waterfalls of the eastern highlands, the thrill of walking to within a few metres of a wild elephant, watching the sun set over the Atlantic, or just making new friends in a down-to-earth local ‘spot’ (bar).

Ghana is often referred to as ‘Africa for beginners’. It might as easily be described as Africa in Microcosm. Not only does this amiable and largely hassle-free country form an obvious entry-level destination for nervous newbie independent travellers, but it also boasts a remarkably varied set of attractions within an unusually compact travel circuit.

The southern part of Ghana is much as you’d expect of West Africa: all lush jungle, heavily hung banana plantations and picture-postcard beaches, albeit with a unique dimension in the form of the string of 500-year-old European forts and castles that line the former Gold Coast. But the real surprises begin as you travel further north, to the game-rich savannah of Mole National Park, a setting that evokes East Africa more than West, or to the Burkina Faso border region, whose deeply Islamic mood and striking adobe architecture lean towards the Sahel and North Africa. What’s more, practically wherever you go in Ghana, English is spoken to an unusually high standard, making it easy for English-speaking travellers to get around, and to interact with locals. 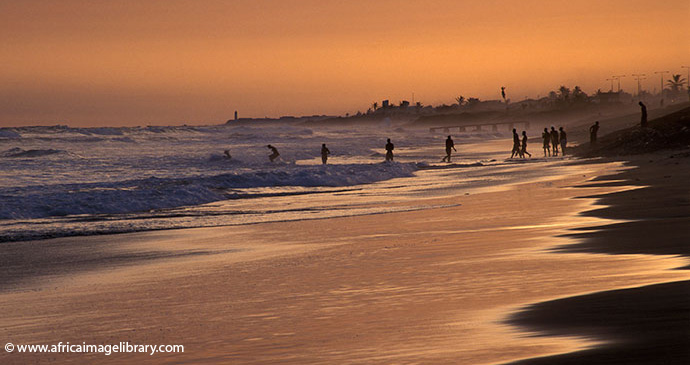 Life on La Beach in Accra. Seldom in Ghana will you feel the trappings of the tourist treadmill © Ariadne Van Zandbergen

What Ghana does lack is that one drop-dead, big-name attraction, the sort of place that friends who’ve visited will say you simply have to see once in your lifetime. Zimbabwe has Victoria Falls, Tanzania has Kilimanjaro, South Africa has Cape Town, Ethiopia its rock-hewn churches. The closest thing Ghana has to offer in the not-to-be-missed stakes is the above-mentioned castles. Not quite the pyramids in terms of impact, I grant you, but nevertheless a unique and chilling memorial to an episode as sickening as any in the recorded history of Africa: the cruel trade in human life that resulted in several million Africans being displaced to a life of bondage in the plantations of the Americas and the Caribbean.

If Ghana lacks one truly great tourist attraction, then it is equally true that busy travellers will find that barely a day goes by without at least one memorable experience, be it swimming below one of the gorgeous waterfalls of the eastern highlands, the thrill of walking to within a few metres of a wild elephant, climbing to the roof of one of the surreal mosques that dot the northwest, taking a dugout canoe through papyrus swamps to the stilted village of Nzulezo, watching colourful mona monkeys play between the houses of Boabeng village, watching the sun set over the Atlantic, or just making new friends in a down-to-earth local ‘spot’ (bar) or ‘chop shop’ (restaurant).

Ghana is also largely free of the trappings associated with mass tourism. Seldom are you made to feel part of some tourist treadmill, and the country remains endowed with some remarkably exciting off-the-beaten-track possibilities. There are, for instance, several national parks and reserves ideally suited for equipped independent travellers, yet which currently go weeks on end without seeing a visitor.

In recent decades, there has been much talk about an African renaissance. And regardless of what one thinks of such generalisations, Ghana is frequently cited as being at the forefront of this movement. Not only is post-millennial Ghana one of the few African countries to have truly embraced the democratic process (and the regular changeovers of elected government, and the freedom of speech and free press that go with it), but it has also boasted one of the world’s fastest-growing and diversifying economies. Trailblazing of this sort is not a new role – the former Gold Coast was the first country in Africa to have extended contact with Europeans, one of the first to be formally colonised and, in 1957, it became the first to be granted independence in the post-war era. Less prestigiously, it also became one of the first African countries to slide into post-independence chaos and, while it never plummeted to the depths reached by many of its neighbours, the modern visitor will find it difficult to reconcile accounts of Ghana in the 1980s with the vibrant country they see today.

Tangibly steeped in history and tradition, yet paradoxically also building towards a brighter future, Ghana is simply one of Africa’s most rewarding and exciting travel destinations. 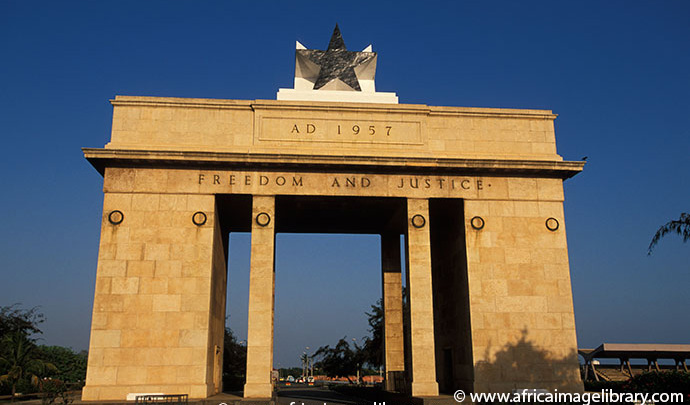 The Black Star Arch, a monument to pan-Africanism and Ghanaian independence. The Soviet-inspired monuments come across as starkly anachronistic, not least because of the absolute lack of African influences apparent in their angular design © Ariadne Van Zandbergen

Incredibly, more than 20 years have passed since I researched the original Bradt guide to Ghana. Much has changed over the course of that time. In the mid 1990s, Ghana – still widely associated with the series of economic and political disasters that marred its first few decades of independence – was generally thought of as a country best avoided by travellers. Today, by contrast, it is routinely cited as a nascent African success story: a genuine democracy whose relative economic health is reflected in the ease of travel conditions compared with most of West Africa.

When we first travelled around Ghana, reliable travel information was scarce, and we relied mainly on the hit-and-miss combination of instinct, serendipity, the advice of locals and a chat with the occasional other traveller. Mostly, it was hits, but the misses were spectacular. On one misinformed occasion, I recall spending 12 hours waiting for a non-existent trotro before retiring to the room where we’d spent the previous night. Elsewhere, we were forbidden from seeing the only room in the only guesthouse in the village until we paid upfront, whereupon the caretaker opened the door to reveal a squealing mass of bats flapping and crapping through the trashed ceiling – fortunately, it was early enough in the day to move on.

Of course, facilities have improved greatly since then; indeed, barely a month goes by without us receiving news of a new tourist hotel, backpacker resort or ecotourism project. And I’d like to think that this book has contributed to that process. But, cheeringly, one thing that hasn’t altered is that Ghana remains a singularly unpackaged destination – you’ll find no snap-happy coachloads here, little in the way of prescribed tourist circuits or wallet-emptying ‘mustdo’ excursions, and plenty of opportunity for whimsical exploration. Ghana today, as it was in 1997, is the ideal destination for the genuinely independent-minded travellers at whom Bradt guides are aimed.