Every odd-numbered year, the glitterati of Africa’s film industry come together in Ouagadougou to celebrate the best of the continent’s varied, vibrant cinema.

Every even-numbered year, Burkina Faso’s second city Bobo-Dioulasso hosts Semaine National de la Culture, a literary and arts festival that is the envy of the region. 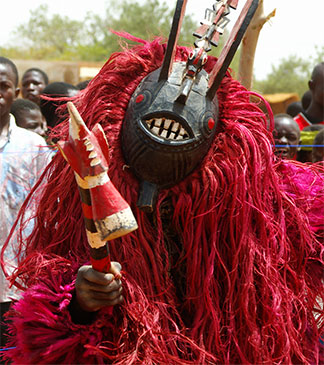 As the dry season heat intensifies, local communities all over Burkina Faso come together to give thanks to the ancestors and spirits in fantastic masked celebrations that are unmissable.

Just before the rains arrive, water levels are at their lowest to offer visitors the best chance of some serious big-game viewing. Getting up close and personal with elephants at Nazinga Game Ranch is one of the best wildlife experiences in west Africa.

Camel trekking in the dunes

Once the dry season heat has well and truly broken, it is time to head north to the edge of the Sahara desert. Take a safari atop a dromedary, and learn about Tuareg culture and the ruins of ancient civilizations.

Every even-numbered year, the capital hosts a major festival that brings together some of the best examples of African jewellery, statuary and textiles. Do not miss the chance to take back some wonderful gifts.

As a centre of culture both contemporary and traditional, Ouagadougou also showcases new music, including a hip hop festival that attracts acts from France as well as the best of the talent from across west Africa.

Cool off in the west

The town of Banfora is one of the country’s prettiest destinations with comfortable, traditional-style accommodation. Explore the nearby Domes of Fabedougou, and the hippopotamus lake at Tengrela for its late-December canoe races.