Rain signals Botswana’s time of plenty – and there are no half measures. As dark storm clouds gather, thunder rolls over the horizon and spectacular forks of lightning spotlight the changing world beneath. A profusion of new vegetation sets the stage for a myriad insects, which in turn attract the stars of the show: a cast of colourful breeding birds decked out in their annual finery.

When much of southern Africa is bereft of visitors, those in the know head for the Central Kalahari Game Reserve, where the parched terrain is washed with soft green grass – swiftly followed by great herds of oryx and springbok, with lion, cheetah and even the odd leopard in stealthy pursuit.

Ostensibly quite empty in the drier months of the year, the great salt pans of the Makgadikgadi and Nxai National Park are transformed in the rainy season by herds of zebra and wildebeest that come to graze on the lush new grasses. And after good rains, you may be lucky to catch sight of tens of thousands of flamingos on the waters of Sua Pan.

As the rains die away to be replaced with superb light, photographers are in their element. Whether you’re out to capture the big skies of the Central Kalahari, the elegance of paradise whydahs in breeding plumage, or herbivore families at their most contented, this is a great time to be in Botswana.

The mystery of the Tsodilo Hills 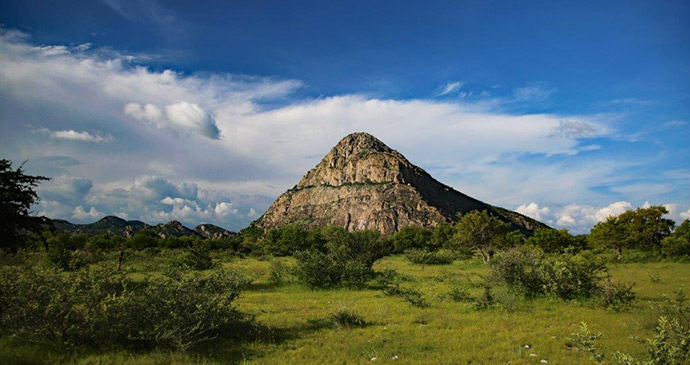 Considered to be the highest point in the Kalahari, the Tsodilo Hills rise above the surrounding desert © Russell Fowler

Approaching the sacred setting of the Tsodilo Hills can send shivers down the spine of even the most cynical traveller. Now a UNESCO World Heritage Site, and relatively easily accessible, the hills are home to literally uncounted works of art created over thousands of years. A photograph can recreate the image, but for the atmosphere, go for yourself.

The Chobe River could be dubbed ‘Botswana for beginners’. From a small boat, you’ll be almost at eye level with the hippos that congregate near Kasane, see crocodiles sunning themselves on the bank, and have front-row seats as elephants cross the river in search of the next meal. What a place to start!

Savuti – a marsh once more

For many years the game-rich area of Chobe National Park has been dry, a ‘marsh’ in name only, but a few years of heavy rain transformed this area into a watery mecca for wildlife. Even in the middle of the dry season, the Savuti Channel is currently flowing, bringing with it herds of antelope, which in turn bring the predators. Game rich indeed.

A walk on the wild side

As you head out at first light, eyes and ears are alert for every movement, every sound. Is the rustle of leaves in that tree a bird – or could there be an elephant family enjoying breakfast? There’s only you and your guide to find out. Seek out one of the handful of camps in Botswana with specialist walking guides – and be prepared to become addicted. 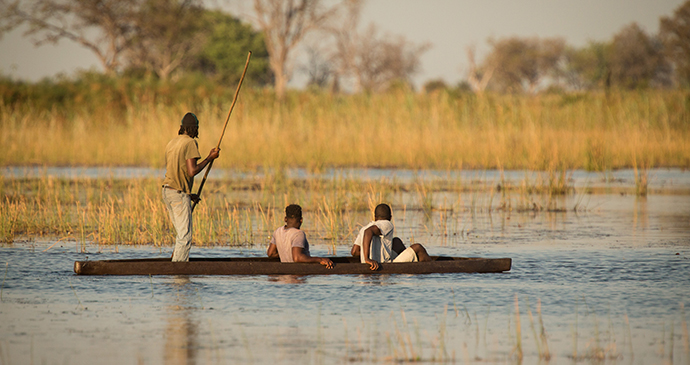 The Okavango Delta is at its most enticing at this time of year © Janelle Lugge, Shutterstock

As northern Botswana shrivels in the heat, the allure of the Okavango Delta, with its ever-present waterways, is – for wildlife and safari-goers – at its most enticing. Take your place ringside in a mokoro, a motorboat, a vehicle or even on foot; this is Botswana at its best.

Red and yellow and pink and green…

As the heat draws to a climax in the Delta, so the air becomes a mass of colour. Carmine bee-eaters nest in the soft sandy riverbanks; yellow-billed storks and pink-backed pelicans congregate at the heronry in Kanana; and migrant waders vie with the resident green-backed herons for tasty morsels at the water’s edge. It’s enough to make a birder of anyone!

A fly to catch a tiger?

Few parts of Botswana can match the Okavango River for its fly fishing – and few fly-fishing trips can offer the reward of the prized tigerfish. With expert tuition, top-quality equipment and – with luck – clear blue skies – it’s the perfect setting; the best lodges even provide the beer!

Riverine trees pendulous with intricately woven nests and sparkling with raindrops: nature’s Christmas trees take some beating. And as a bonus, you get to marvel at the intricate craftsmanship of the male weaver birds, as they vie to outdoor each other in the all-important task of nest-building.