When and where to visit – Angola 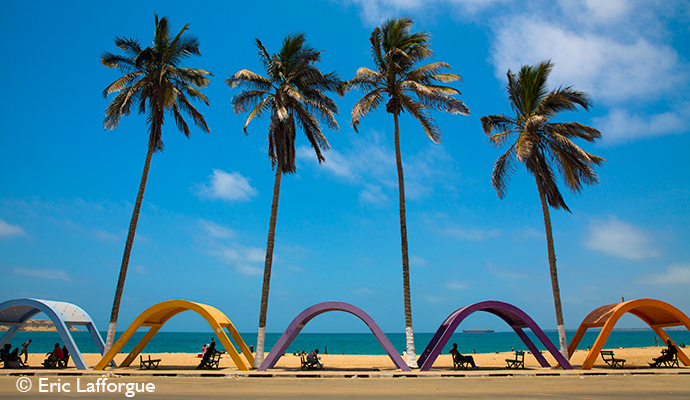 The main attraction in the town of Namibe is the seafront, which looks out on to a deep blue bay © Eric Lafforgue

Angola’s climate varies according to latitude and altitude but the dominating influence is the cold Benguela Current which keeps temperatures bearable and rainfall down, at least on the coastal strip. In broad terms the country can be divided into four climatic zones: the north, where the rainfall is very heavy and the temperatures high; the central plateau, which is generally dry with average temperatures of 19°C, though much colder at night; the coastal plain which is cooler and dry; and finally the hot, dry Namibe Desert towards the south.

Luanda is pleasant during the dry season from May to August, though early mornings and evenings can be chilly; lows vary between 19˚C and 23˚C and highs range from 24˚C to 29˚C. It will not rain during this period and so it gets very dusty. Even in the hot and rainy season, from September to May, it is rarely uncomfortably hot, but on days when the humidity is high, Luanda can get rather steamy. The first few days of rain in September wash away the months of accumulated dust and give the city a cleaner and brighter feel. Most rain falls in March and April and can occasionally cause severe flooding in Luanda and throughout the rest of the country. The few days when there is torrential rain can make for a pretty miserable time as the city sometimes grinds to a halt.

The rainy season is not a good time to travel off the main roads as rains make many roads impassable due to mud, floods, landslides and washed-out bridges. Avoid the rains too if you want to see wildlife as the grasses grow high, and obscure both the animals and their tracks through the bush. However, the rainy season or just afterwards is a good time to visit the Kalandula Waterfalls and the Binga Waterfalls as they are in full flow. 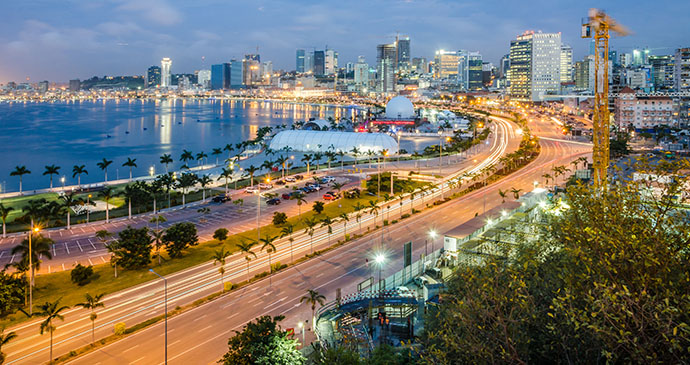 Luanda’s main strip – known as the Marginal – is now restored to its former glory as an elegant promenade and the site of the capital’s major celebrations © Fabian Plock, Shutterstock

Drive around Luanda looking for the once impressive, but now rather dilapidated, forts, churches and government buildings left over from Portuguese colonial rule. Head across the bay to the Ilha sand strip for a bite to eat with views of the city on one side and the Atlantic on the other, then party in the strip’s numerous sophisticated bars and clubs. On the downside, shopping is limited (and expensive), but there’s enough to do in Luanda to keep most people occupied for three or four days, particularly if they want to spend a day relaxing on the beaches of the Ilha. Luanda is also a great base for discovering the rest of the country.

Safari-style game view trips to the Kissama National Park are popular with tourists and expatriate residents of Luanda alike. Kissama is less than 2 hours’ drive south (with no traffic) and it is possible to visit the park and return to the capital the same day, though an overnight stay in the park or one of the nearby lodges on the Kwanza River is recommended.

Lobito and Benguela are pretty and relaxed towns some 550km or so south of Luanda. Both have fine beaches. The road from Luanda has sadly deteriorated south of Sumbe so it is recommended you fly down to Benguela, or face a drive of 10 hours. While it is possible to do the journey in one day you could avoid this by staying in comfortable lodges on the Kwanza River, in Porto Amboim or in Sumbe. All of these locations offer tasty home-cooked food, usually based around fresh fish and seafood.

If you are a beach-lover, Luanda, Benguela, Lobito, Sumbe and Porto Amboim all have beaches that are easily accessible. Pack your board and long shorts for a weekend of surfng at Cabo Ledo. There are also loads of deserted beaches just waiting to be discovered – but only for those with a 4×4 and a sense of adventure.

If waterfalls are your thing, you won’t be disappointed. The falls at Kalandula are said to be Africa’s third-highest at 105m, and Binga Falls are a worthwhile side trip from sunny Sumbe. Hunguéria Falls are not easy to find, but getting there is fun.

Spend two/three days exploring Luanda. When you are bored of lobster and chilled beer on the Ilha, head for the beaches of Mussulo and rub shoulders with the glitterati of Angolan society. Try some game-spotting in Kissama National Park and spend a night or two listening to the wildlife around you. And if you remembered to bring your fishing tackle, try your luck at reeling in tarpon, giant African threadfish and dorado – but be sure to bring your camera, otherwise the folks at home won’t believe your tales of record-breaking catches.

After exploring Luanda, head east to the mysterious and imposing rock formations of Pungo Andongo – a site that held David Livingstone’s attention for a couple of weeks in 1854 and where you can hunt for Queen Ginga’s footsteps, which are petrified in the rocks. Overnight in Malanje’s restored colonial Palácio Regina Hotel. Then set off early the next day to Kalandula Waterfalls and scramble to the bottom for a refreshing dip in the river. You could also try one of the suggested itineraries for road trips around Kwanza Sul.

Load up your 4×4, recharge the satellite phone, switch on the GPS and head towards Namibe. On the way visit the old Boer cemeteries at Humpata and Barracões; hold tight as you teeter over the edge of the vertiginous Tunda-Vala cliffs; visit the statue of Christ overlooking Lubango – he’s modelled on the one in Rio de Janeiro; and drive through the bush for a day to find Hunguéria Falls. Return on good tarmac roads and enjoy the hairpin bends as you descend through the Serra da Leba pass and into Namibe province. Visit the abandoned mineral port, frozen in time, just outside Namibe town, and stock up with fresh provisions in dusty Namibe before heading into the desert. On the way you’ll see the rare endemic Weltwitschia mirabilis, antelopes of various types, and perhaps even the odd snake and scorpion; have the chance to mingle with the topiary-haired youth of the Nhaneca-Humbe tribe as they lead you to prehistoric rock paintings at Tchitundo-Hulo, miles from anywhere; and look for leopards at Pediva’s hot spring oasis. For much of this trip you’ll be camping, but there’s very welcome respite at Omauha Lodge with its bungalows fashioned out of rocky outcrops, or Flamingo Lodge with its amazing fishing. For the return journey (and only for the very well equipped and those with experienced guides), the beach run between Foz do Cunene and Baía dos Tigres is a race against the tide. Get stuck in the sand here and you can wave goodbye to your 4×4.