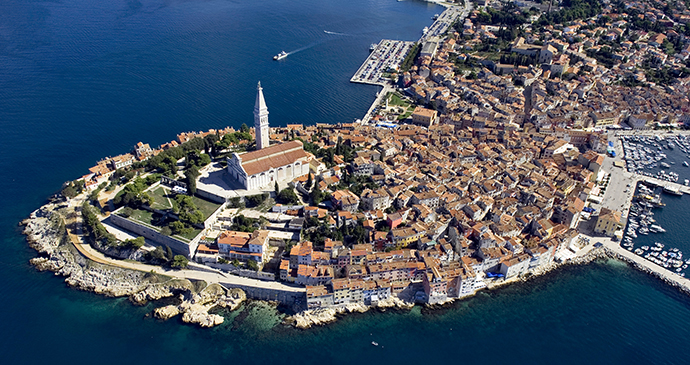 Long the seaside playground of the central, landlocked-Europeans, Istria’s attractions are becoming increasingly well known and popular with Englishspeakers. Whilst Croatia’s Dalmatian coast has topped the list of tourist destinations in Croatia in terms of visitor numbers for a while now, it is little Istria’s proximity and accessibility that attract those who want to stay and play a while and really appreciate what life on the Adriatic has to offer. A large, wedge-shaped peninsula at the head of the Adriatic, Istria has some of Croatia’s most famous sites, including Pula’s Roman amphitheatre, UNESCO-protected Byzantine mosaics in Poreč, picturesque medieval hill towns and hidden frescoes, and Brijuni Islands National Park, home to Tito’s former summer residence. Renowned for its cuisine (and food-related festivals), in particular its truffles, game, first-rate pasta, seafood, wine and olive oil – and a whole host of earthy peasant stews – Istria also hosts Croatia’s two most famous international film festivals (Pula and Motovun), while Rijeka, on the edge of the Istrian Peninsula, boasts the second-largest carnival in Europe after Venice, and is set to become European Capital of Culture in 2020.

And that’s just a taste of the cultural stuff. Then there’s the outdoors – both above and below the water. A mix of Mediterranean and continental fauna adorn the peninsula, as well as some rare endemic species. Istria’s cuisine is a further testament to the wealth of the soil here, and its geographic diversity for such a small
area is matched only by the region’s variety in outdoor sports which includes wellmarked and well-trodden hiking trails, the Parenzana long-distance cycle route, one of Croatia’s best spots for windsurfing at Rt Kamenjak, paragliding from the slopes of Ćićarije and Učka, and diving among World War 1 wrecks.

My first contact with Croatia came at the age of four, when living opposite the former home of author Rebecca West in the village of Ibstone, Bucks – and through recipes from my mother’s copy of The Balkan Cookbook, which have evidently shaped my taste buds forever. Many years later I met my wife, who is Croatian, while trekking through the mountains of eastern Turkey, and moved to Zagreb soon afterwards. In the 20 years or so that I’ve been visiting, living in, writing about or photographing Croatia, Istria is one of those places I’ve developed a particular fondness for, especially the hinterland with its wonderful medieval hill towns. It is also somewhere I’ve long thought deserving of far more detailed coverage than is possible in a guidebook to the whole of Croatia so I was very pleased to be joined by Thammy in putting it in the spotlight. I hope we’ve come somewhere near to doing it justice.

Already a Balkanophile, I was drawn to Istria a decade ago. As a spit of land, it has been bandied about between various nations, yet has borne all this in its stride with pride. As a result it is remarkably cosmopolitan, even in its village life, and so I feel very at ease there. Istria evokes a feeling of warmth: a warm sea in the summer, a warm hearth in the winter and yes, warm-hearted people. I was hiding away there in the summer of 2011, in our lovely Istrian farmhouse, when Adrian Phillips, then Publishing Director at Bradt, asked me whether I would be interested in co-writing a guidebook on Istria. Part of me does not want to write about the place where I go to escape, nor to write about the many secrets best known only to those who live there. But my desire to see it better represented in more than just a few pages appended to the rest of Croatia’s glory got the better of me. Thank you, Rudolf, for disturbing my peace.