When the lion roars

by Jonathan and Angela Scott

Kenya has been my home for forty years, my wife and daughter are citizens, our grandson was born here and has made more safaris in his first year than many people will be privileged to do in a lifetime – and he has enjoyed a holiday at the coast. Four weeks ago this prompted me to write an article that appeared in the travel section of the Saturday Telegraph in the UK – the land of my birth – telling people just how much Kenya needed tourism – that it was vital to our economy and to conservation. Without substantial revenue from tourism our wildlife will be even more vulnerable to poachers; setting aside wilderness areas for animals even harder to justify to land-hungry humans. The article was circulated widely by the Kenya Tourist Board to encourage overseas guests to visit this wonderful country in the face of a barrage of Travel Advisories that have cast a long shadow over our tourism industry. If you look on a map you will see just what a tiny part of Kenya is prompting security concerns – yet the repercussions of recent events and the impact of Travel Advisories have been devastating and on a scale that in no way reflect the situation in the country as a whole.

What a difference a month can make on this fast paced planet of ours. The World Cup has kicked off and the champions Spain are already on their way home. But that is not what is catching my attention right now. It would be easy to feel despondent reading headlines telling the world of renewed loss of life on the Kenya coast not far from the ancient city of Lamu, together with the killing of Satao barely a month after the death of Mountain Bull, two mighty ‘tuskers’ slaughtered for their magnificent ivory tusks worth nearly US$2,000 a kilo in the Far East. The bulls were in their mid to late 40s and had lived through events both locally and internationally that have blighted Kenya’s tourism industry in the past – the bombing of the Norfolk Hotel in Nairobi on New Years Eve 1980/81; the Gulf War of 1990/91; the bombing of the American Embassies in Nairobi and Dar es Salaam in 1998 and the political violence that erupted at the time of Presidential elections in Kenya in 1997 and 2007. Despite these setbacks the tourism industry has always shown a resilience that has enabled it to dust itself down and snatch victory from the jaws of defeat. But make no mistake these are difficult times. All the more reason then to redouble our commitment to Kenya, to ‘light a candle rather than curse the darkness.’ 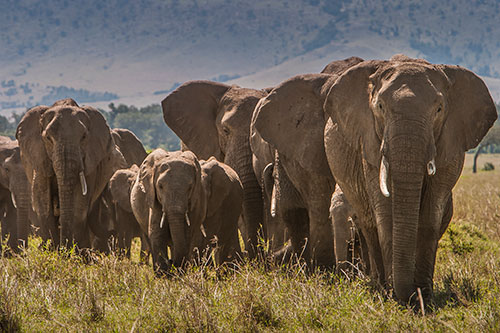 Terrorism and poaching go hand in hand. They feed on fear and insecurity. The battle to save our planet’s increasingly endangered wildlife might appear to be a lost cause whether attempting to protect the last few thousand wild tigers in Asia or stemming the catastrophic epidemic of elephant and rhino poaching in Africa. Even the Masai Mara where Angie and I continue to follow the lives of its charismatic big cats has seen an alarming upsurge in poaching in recent months with reports of 117 elephant carcasses new and old discovered during a census of wildlife in the Reserve – minus their tusks. At times like these it is understandable to feel powerless and downhearted. But each individual can contribute in a meaningful way by simply holding up their hand and saying ‘NO’ to the killing.

When I was working on a book on leopards in the 1970s it was estimated that 50,000 leopards were being trapped, shot and poisoned across Africa each year for their beautiful spotted coats. In the 1980s a brilliantly orchestrated advertising campaign writ large on billboards and in cinemas across Europe and America turned the tide in the fight against fur with graphic images from photographer David Bailey showing a model dragging a blood soaked fur coat above the words: “It takes up to 40 dumb animals to make a fur coat but only one to wear it.” And in 1989 when Kenya set fire to 12 tons of ivory in Nairobi National Park it caught the imagination of the general public, helping to change people’s perceptions and leading to a ban on the trade in ivory that same year. But as recent events have shown we must always be vigilant on behalf of wildlife – some people are wearing fur again, some never stopped. And until China bans ivory imports the killing of our elephants will continue apace.

We are not alone in our commitment to change. Kenya is loved around the world for the warmth of its people and the wonder of its great migration of wildebeests and zebras. Right now the animals are thundering in to the Mara in their tens of thousands. This is the time to be there to witness the greatest wildlife show on earth. If ‘Brits’ are pondering the wisdom of visiting Kenya they can do no better than embrace the Stay Calm and Carry On attitude of their own Royal Family who have lost loved ones to acts of terrorism in the past – the Queen’s cousin Lord Louis Mountbatten was murdered by the IRA in Ireland (along with three other people including his grandson Nicholas), when a bomb detonated on his fishing boat in 1979. They live with the threat of terrorism wherever they are in the world. 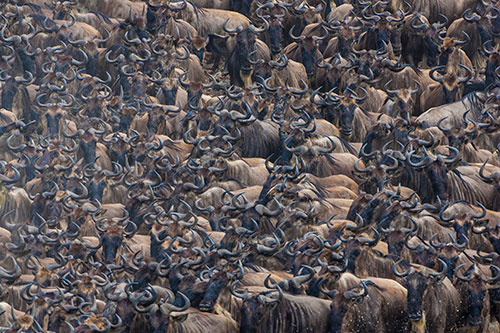 Prince William and his wife Kate are one of the most recognizable and iconic couples on the planet – and great friends of Kenya. The Prince proposed to his future bride while on holiday in the country. Like his father Prince Charles, William is passionate about wildlife and recently launched United for Wildlife bringing together a coalition of conservation groups committed to making a difference. Under the banner of Whose Side Are You On, and harnessing the power of charismatic sports personalities such as football’s David Beckham, motor racing’s Lewis Hamilton, cricket’s Raul Dravid, rugby’s Francois Pienaar and China’s basketball superstar Yao Ming, United for Wildlife is mounting a Social Media campaign on Facebook, Twitter and Google to spread its message to all corners of the earth. Imagine if we could engage Kenya’s beautiful and talented Oscar-winning actress Lupita Nyong’o alongside our world beating sportsmen to show solidarity with a campaign that will help protect our own wildlife? Knowing Kenyans they will.

One might draw some grain of consolation from the loss of the world’s wildlife if it was the disadvantaged and impoverished among us who were benefiting from the carnage – the people losing their lives and jobs right now. But it is not. It is the rich and greedy – and seemingly untouchable – who are turning a vast profit from the illegal trade worth US$5–20 billion annually, as is the case with the other major criminal activities that are such a stain on our character: trafficking in drugs, weapons and people across the globe. A friend recently sent me artwork depicting The Earth’s Land Mammals by Weight. It showed all too graphically just how much of our planet we humans and our livestock – cattle, sheep, goats, pigs and horses – already occupy. Wildlife is being squeezed out of the landscape like never before. Africa’s 450 to 500,000 elephants are barely visible in the larger picture. So how will things look with another two billion people on this earth by 2050? We must act now.

When it comes to tourism wildlife is Kenya’s greatest asset as one long time resident reminded me in his response to my recent article. “The world is littered with beautiful places that lure vacationers. Many have beaches, sunshine, great food and lovely people … just as Kenya does. However, Kenya’s amazing wildlife is its advantage over all those other destinations.” With so many options for travellers these days we cannot afford to rest on our laurels. Our tourism product has to be competitive in price and services if it is to keep topping up our foreign exchange coffers so we can continue to conserve ‘world heritages’ like the incomparable Masai Mara. That is why tourism is so vital to this country along with the tens of thousands of jobs it helps to create.

The message we wish to send to our friends overseas is this: ‘Sign up to the Why I Love Kenya campaign as you plan your next safari. Lend your collective voices to United for Wildlife by embracing the challenge of Whose Side Are You On. If you do that today we all stand to benefit – people and wildlife the world over.’

It may be too late for the iconic Mountain Bull and Satao, but we can still honor their memory.