Angola‘s capital city, Luanda, has come a long way from its origins in the late 1600s. The country’s recent oil boom has led to major regeneration within the city, yet it still remains scattered with old Portuguese architecture, upmarket coastal nightlife, historic monuments and hilltop suburbs. Luanda is likely to be your first port of call in Angola, but this sprawling city should certainly not be skipped over. Read our handy guide on what not to miss in Luanda. 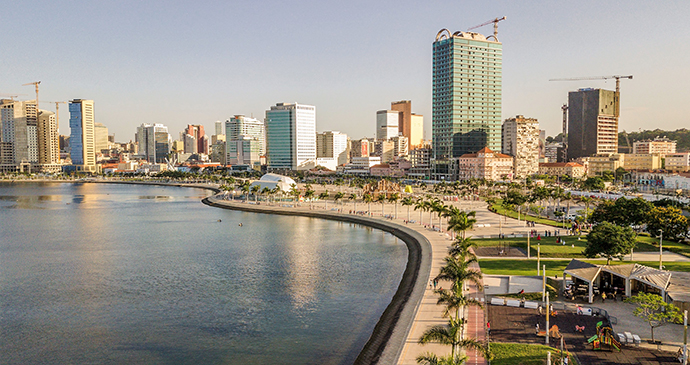 The Marginal has benefited from an extensive modernisation programme © Mrgomez, Shutterstock

The Marginal – or the Avenida 4 de Fevereiro, as it is more properly known – is a busy main road lined with a mixture of government departments, embassies, airline offices and travel agencies. In November 2006, the municipal authorities began the first phase of an ambitious 15-year and US$2 billion programme to clean up the badly polluted bay and revamp the Marginal. The road has been widened to three lanes in each direction with green spaces separating the two. Parts of the road now extend on to reclaimed land. The first phase was opened by the president in August 2012. New high-rise hotels, offices, a convention centre, apartments and car parks are still springing up. Most visitors will spend quite a lot of time on the Marginal when trying to cross town or going to and from the bars and restaurants of the Ilha. 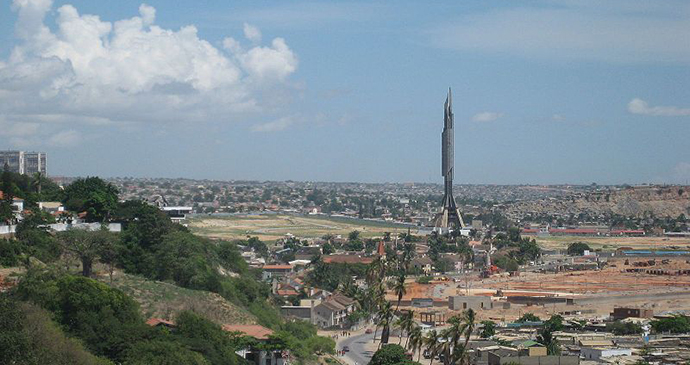 At the point where the Marginal meets the Fortaleza de São Miguel and the Ilha, the main road continues south through the once-posh suburb of Praia do Bispo. Old colonial houses on the left-hand side of this road were once on the seafront but land reclamation in the 1970s robbed them of their sea view. Approximately 500m of slums grew up in front of them and separated them from the Chicala lagoon. The air here is thick with the dust of two concrete factories. A new road was built through this area in 2008 and in 2016 the slums were demolished in a controversial urban regeneration plan. At the end of Praia do Bispo is the space-rocket-like monument at the Mausoleum of Dr Agostinho Neto, Angola’s first president who died in 1979. It’s a slender, grey concrete needle that punches 120m into the air. The mausoleum is sometimes open to the public for an entry fee of 200AOA. 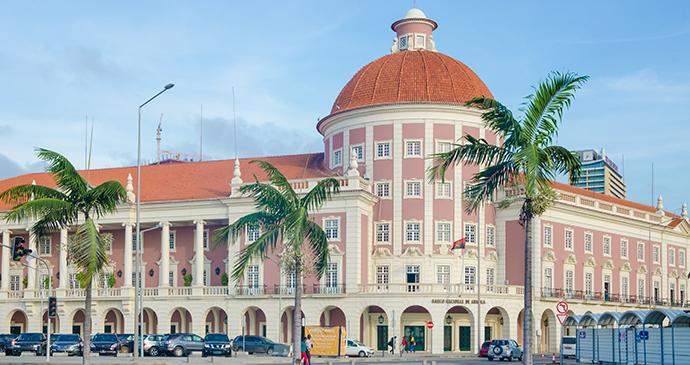 The National Bank of Angola is the finest remaining example of Portuguese colonial architecture in Baixa © Fabian Plock, Shutterstock

The Baixa (or ‘downtown’) is an ill-defined area bounded by the bay and extending several blocks inland, stopping as the land rises and forms the Cidade Alta. It’s here that old meets new: the 23-storey Sonangol skyscraper, opened by the former president in 2008, and designed to look like a barrel of oil; a new stadium in Coqueiros; and multi-storey buildings all compete with traditional shops and workshops set in crumbling 17th-century buildings. In the 20th century this area was developed as a European business centre and African residents were cleared out to musseques on the edge of town. The Baixa now is where much of the day-to-day business and commerce of the city takes place. In the heart of the Baixa, on Rua Major Kanhangulo, is the old Iron Palace. For many years it housed art exhibitions but was abandoned during the war and remained derelict until renovations began in 2007. In 2016 the palace reopened after a US$70 million refurbishment and now sometimes hosts live music, book signings, art exhibitions and other cultural events. 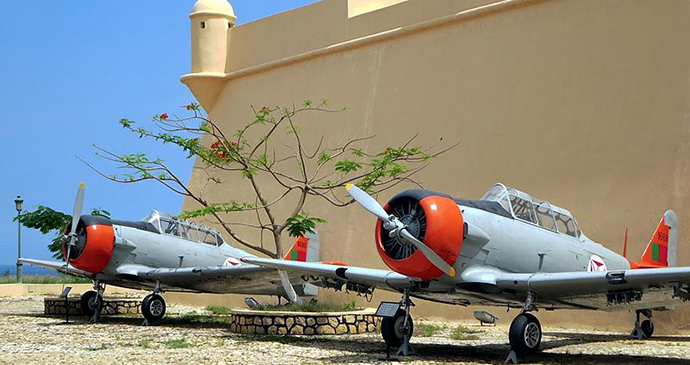 The Fortaleza de São Miguel is also home to the Museum of the Armed Forces © David Stanley, Wikimedia Commons

The Cidade Alta is a pleasant, airy and calm suburb above the rest of the city. It commands good views over the bay, the Ilha and the Baixa. The Presidential Palace is here together with the office of the prime minister, the Ministries of Defence, Immigration, Justice and Health, and the British Embassy. Members of the former president’s extended family and senior government officials live in splendid isolation close by. Security is tight, with soldiers and police everywhere, and regular patrols carried out by the president’s heavily armed elite guard.

The Cidade Alta’s main attraction is the São Miguel Fort (Fortaleza de São Miguel). Although closed for a number of years for renovation it has now reopened, charging visitors 100AOA for entry to the museum and courtyard, housing a collection of colonial-era statues. If you only have limited free time in Luanda, you should head for the fort and its panoramic views of the city. Late afternoon is a good time to visit to catch the sunset. 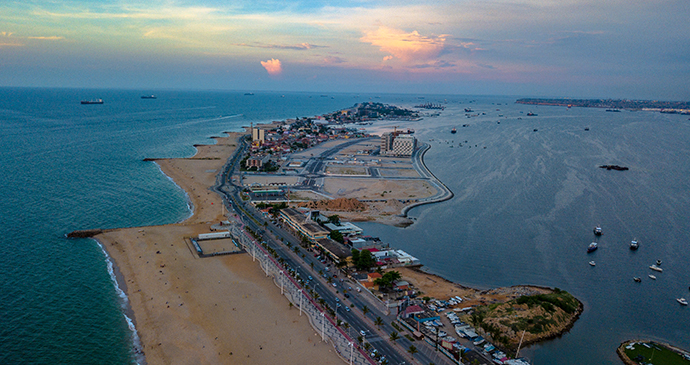 The Ilha is the main recreational area of Luanda © Fly with Sebastian, Shutterstock

From the fort you can see the Ilha do Cabo snake out to sea in front of you. ‘Ilha’ is pronounced ‘eel-lyuh’ and the ‘do Cabo’ is usually dropped; the English translation ‘island’ is never used. It’s an 8km-long peninsula that is about 500m at its widest point and 100m at its narrowest point and forms the outer arm of Luanda Bay, separating it from the Atlantic. The Ilha is loaded with bars and restaurants popular with Angolans, expats and tourists alike and has a special place in the history of Luanda and the hearts of Luandans.  It was on the Ilha that the Portuguese explorer Paulo Dias de Novais made landfall in 1575.

The residents of the Ilha are a proud lot, considering themselves to be the true Caluandans (inhabitants of Luanda), and can display a certain aloofness over other residents of Luanda – indeed, not all of them were happy when the bridge linking the Ilha to the mainland was built. There’s a community feel about the place and many of the old families still maintain strong links with fishing.