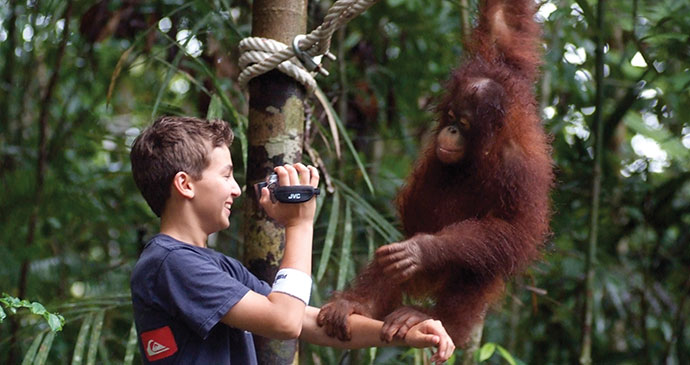 An orangutan poses for the camera © Sarawaktourism

Orangutans tug at the universal heartstrings for the plight they have endured. Adorable yet endangered, today they are famous as an international mascot for Malaysian tourism, but it hasn’t always been that way. Nineteenth-century explorers and scientists depicted them as useless, dirty and dumb, write Gisela Kaplan and Lesely J Rogers in The Orang-utans (Allen and Unwin, Australia 1999).

Stories were told of orangutan males who abducted fragile English ladies and raped them in trees. The orangutan was too large and strong to be a pet and of limited use as a domestic helper. Their entertainment value when compared with the chimpanzee was poor; likewise for medical research. Capping off the long list of indictments, the orangutan was difficult to observe, boring to watch because of its ‘sluggish’ behaviour, and impossible to keep confined.

Based on their experiences with orangutans in Sabah, the authors saw just how far from dumb these animals were, particularly in the extent to which they are adapted to their rainforest environment.

The shrinking of that habitat seems all the more cruel when we understand how resourceful and flexible orangutans are. Just like humans, they are master generalists, performing well in everything they do. They are perhaps the fastest of the great apes in problem-solving, have excellent memories, and are superb imitators. They are also highly skilled trapeze artists – the largest mammal in the jungle canopy, negotiating this habitat requires developed cognitive abilities.

Orangutans are accomplished and innovative tool users, using leaves as hats or umbrellas when it rains, or as gloves to climb spiky-trunked trees. Sumatran orangutans craft termite-capturing ‘fishing rods’ from twigs, poking them into termite nests to collect the insects, just like chimpanzees. This intelligence goes beyond the confines of life in the rainforest. Orangutans fall within a cognitive circle once thought to include only humans: they can make fires, learn to play a guitar, wash clothes, use tools and imitate whatever humans do, simply by observing rather than being taught. ‘In some areas a five-year-old orangutan may perform at about the same level as a four-year-old human child.’ They are in fact 97% genetically similar to us, sharing a common ancestor 10–12 million years ago.

Orangutans are gentle, intelligent, complex and contemplative, often sitting for hours just gazing. As Willie Smits told The Age newspaper in 2004, ‘The world would be a better place if humans were a bit more like orangutans.’