It was a Sunday evening, summer had already surrendered to the anticlimactic half-season prologue to autumn and Lille lay between excuses. A rare weekend with no festival, no season, no theatre. To cap it all, as I glided upwards from the métro to a subdued place Rihour, it was raining. Not heavily, just the lightest drizzle of a mild evening on the cusp of equinox. Yet, I was contemplating a sulk.

Just when I thought that Lille held no more teasing for me, I looked up and stared across the empty squares.

Those yellow, syrupy pools of light that slipped from glistening gables to bright washed cobbles lured me across the place du Général de Gaulle towards the inexcusably beautiful Vieille Bourse. The sounds of music filtered through: echoing cracked shellac tones of a long-forgotten afternoon crooner at 78rpm and from Renaissance arched doorways escaped the unmistakable Latin sound of the tango. Long shadows sliced the glow from the cloisters and I prowled around the building, looking for an open door. From the place du Théâtre I stepped up and through the entrance to the Vieille Bourse, Lille’s timeless Rialto for bibliophiles and chess players, where usually the most physical effort comes from the holding to the light of the slightly foxed uncut pages of a 19th-century novella, or the flourished taking of a queen’s bishop by a cannily primed pawn. 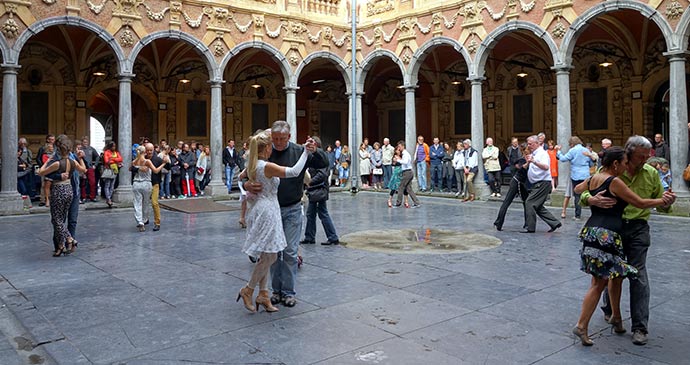 Before me was movement, the seductive synchronicity of backs arching in tandem, toes pointing forward then sliding up close-pressed calves, waists pulled, shoulders shrugged, and eyes locked in concentrated complicity. But this was no geriatric thé-dansant, nor a choreographed show dance. This was Lille taking its weekend rites as a right to the last second of liberty. In a city defined by youth this was, in fact, a genteel coup of measured eff usion, sagesse and experience over unrefined jeunesse and exuberance. In the squares outside, the weather dictated the sprit. Within, the soul triumphed over the elements. Generations swept across the courtyard, defying the rain and convention. The will was for a Latin night and, enclosed by red brick, white stone and a garland of gables framing the evening sky, a Latin night triumphed.

All along the cloisters around the dance floor stood students with bicycles, and as yet uninitiated couples soon to learn from a generation who knew (from the tango) the potent supremacy of prized promise over instant gratification. As the gramophone played, so the ages merged. Just as a record from over half a century ago was boosted through digital speakers, so groomed grey heads led where tight designer-encased buttocks and thighs  followed. Age and social status played second fiddle to the imperative pulse of the accordion. Where dinner jacket took to the floor with a yellow cardie, a classic little black dress and the partiest, stripiest cocktail stilettos followed the lead of a jumper and jeans.

A great bearded bear of a working man in a heavy, plaid woodsman’s shirt lumbered rhythmically and steadily through each stride and turn of the dance, while his whisper-waisted partner, hair a pre-Raphaelite tumble of curls, neatly picked her way around his strides, turning his bulk into gallantry. Behind them banker-brown brogues stepped from caution to promise, lured into seductive swirls by sharp white Vogues.

A well-upholstered Juno clasped a tiny lad to her embonpoint, as they danced, cheek to breast, his eyes peering through the shade of her formidable protection to follow her feet, defining determined arcs through shiny puddles. And on the far side of the Bourse, sharp, bright tailor’s eyes peered expertly through wire-rimmed spectacles as a veteran of the dance floor continued nimbly to foot it across the courtyard, his younger companion knees bent, raised, swept and strutted in coy assertion of confident complicity in this ritual courtship.

Shoddy trainers kicked off and toes treading rainwater, the most timid of onlookers would allow himself to be lead across the flagstones floor by a lady of means, experience and purpose. Other discarded pumps and boots lay safely dry behind pillars as barefoot bohemia joined the measured maelstrom, delicately turning and tripping through the puddles.

Ahead and among these shifting couplings, a sweeper picked his way through the swirl with his broom pushing the rainwater away from the participants, every thrust of his broom an unconscious echo of the discipline of the dance all around.

Of course, the city had been dancing long before the rain shower beckoned me across the squares to discover yet another of its secrets. And the modest ball continued until the lights in the Bourse were switched off at 22.00, to a genteel round of applause, an announcement of the following week’s rendezvous, the promise of dance classes for novices and the bonbon reward of one last dance under the stars of a freshly rinsed clean indigo sky before bedtime.

And I headed back to the métro having learnt the happy lesson never to take this city for granted.

Tango at the Vieille Bourse is held on Sunday evenings in summer (Jul–Sep). Check with the tourist office or go to  http://souslesmarronniers.blogspot.fr.