Gabon’s woodcarvings and masks are world famous and have been a source of inspiration to artists worldwide. Both Picasso and Matisse were influenced by the beauty of Fang masks. The sale of a typical Fang’s Ngil mask for US$7.5 million in 2007 is a clear indicator of the value the art world currently places on them.

During the colonial era, however, these particular masks terrified the French. Worn by the law-enforcing Ngil society, carriers of the masks were responsible for maintaining law and order and persecuted suspected offenders. The masked Ngil members arrived at the home of a suspect in the dead of night, performing mysterious ceremonies that often resulted in the death of the wrong-doer. After a series of ritual murders in 1910, the French ultimately forbade the Ngil to produce its masks. 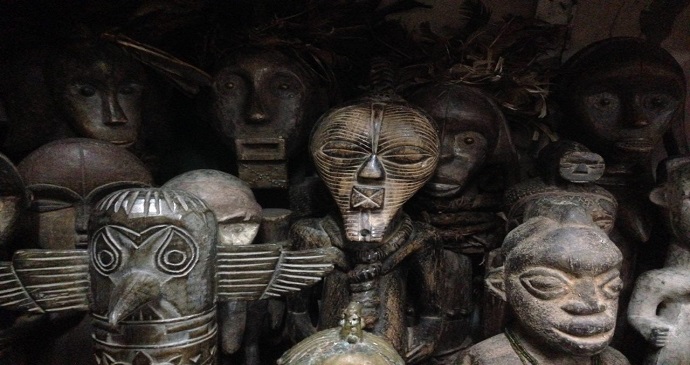 Gabon’s woodcarvings are, quite rightly, a source of inspiration to many artists worldwide © Sean Connolly

Known as the white-face style, Bapounou (or Punu) masks (mukudj) are whitened with kaolin, the colour of death and spirits. They represent the Bapounou’s female ancestors and have diamond-shaped scarification marks on their forehead. The elaborate Bapounou hairstyles suggest that the wearer is wealthy, as her hair has not been flattened by the need to carry goods. These masks are still worn by dancers during public ceremonies or funerals. The dancers perform on high stilts so they tower above their audience.

As in many African cultures, all 40 or so ethnic groups in Gabon believe ancestors to have the powers to bring good or bad fortune to their descendants. Their relics, such as skulls, teeth and certain bones, which are believed to be imbued with the powers these people had during their lives, are kept in containers. Sitting on top of the containers, wooden reliquary figures guard these enshrined relics.

With its large head, long body and short limbs, the Fang’s guardian or Bieri has the proportion of a newborn, thus emphasising continuity of the ‘notyet-born’, the living and the dead. Bieri figures are often embellished with elaborate coiffures, facial scarification, jewellery, horns and other emblems of spiritual power. The Bakota guardians, Mwete, are flat, more abstracted, with their oval, concave faces sheathed in metal (brass or copper), which gleam at night to protect against evil.

Every aspect of the reliquary figure, from the selection of the wood to its creation, was overseen by a priest. During the first decades of the 20th century reliquaries and the priests who controlled them were banned by the French.

Keen to explore more of Gabon? Get 10% off our guide: