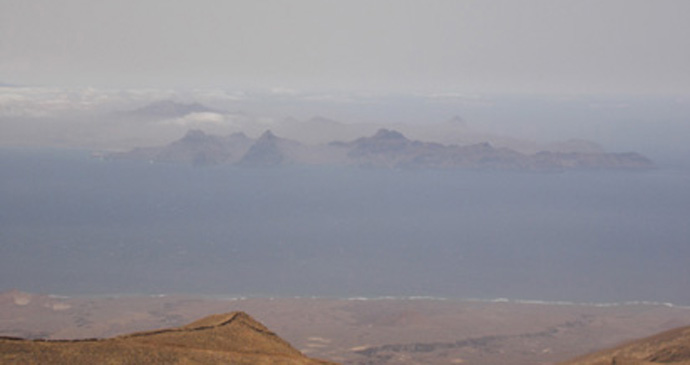 From the heights of Santo Antão, neighbouring São Vicente seems to float in mid-air © Murray Stewart

The pick-up roars (briefly) out of town, but reaches little more than 40km/hour before the tarmac inevitably gives way to the more familiar, passenger-massaging cobblestones that are the trademark of Cape Verde’s road network. Cobblestones do not encourage speed, and our vehicle duly slows.

For 30 minutes we wind upwards, our driver dropping through the gears until he can drop no more. We are now reduced to just above walking speed, and I am beginning to understand why it takes 2½ hours to cover the 26km from Porto Novo to Tarrafal de Monte Trigo. We come across a couple of cows, looking for something to munch: at an altitude of 1,200m, and at the end of the dry season, there’s not much choice on their menu. In a month or so, the rains should come and the landscape will be transformed from desert to green. Life will be easier for the cows.

Higher up, the cows give way to goats. We seem to be eyeball to eyeball with the craggy peaks of São Vicente, away to the southeast and an hour’s ferry ride across the ocean from Santo Antão. But we have not finished our climb, not by far. After another 20 minutes of funereal progress, we turn a corner and we are no longer looking across at São Vicente’s peaks, but down on the whole island, as if we were in an aeroplane. Front, back and both sides of the neighbouring island are visible. I ask the driver to stop for some photos and when he obliges, I realise for the first time that we have acquired an extra passenger from somewhere. Perched on the back of the truck is a middle-aged man, his feet wedged between a crate of beer and some plastic barrels. As well as being the passenger transport, we are also the Tarrafal delivery vehicle. We continue. Left hand only on the steering wheel, with his right hand our driver is tossing up a sealed package of pills he has collected from the pharmacy in Porto Novo, to deliver to someone in Tarrafal. The package is lobbed upward, then neatly caught, the pills seemingly rattling in perfect time to the seductive music washing over passengers from the dusty radio. An unusual percussive aid, I think to myself, but my admiration at our driver’s dexterity and sense of rhythm is tempered by my preference for a ‘both hands on the wheel’ policy, as we negotiate yet another hairpin.

Our next stop, even higher, is for another passenger to buy some fresh goat’s cheese from a precariously situated dwelling. The mother goat plays with her two kids as the transaction completes. At this new altitude, I also have another startling discovery, for beyond São Vicente, the peaks of São Nicolau – the ‘nextdoor island-but-one’ – are now visible above a distant layer of white cloud. My fellow passengers tell me that they have even seen the volcanic cone of distant Fogo, on a clear day.

At a junction, the cobbles pass over the baton to a rutted dirt track and the discomfort increases. At last we are heading downward, a line of lonely telephone poles to guide us. The ribeiras are dry now, though will not remain so for long and I marvel at the deep troughs the previous year’s rainwater has carved in the ground as it headed seawards. Bridges are often washed away, I am told, making it necessary to send up a vehicle from Tarrafal to meet another from Porto Novo, transferring goods by hand from one vehicle to the other, across the gap, to keep the town supplied.

There is no other road in.

We stop again, this time at a squat building, and we edge nervously on foot towards the nearby cliff. Tiny Tarrafal is below, perhaps 1,000m of descent. Before the dirt-track road was completed in the 1980s, this building was used to store goods brought from Porto Novo and the townsfolk would have to carry everything down the steep cobbled path to town. It’s actually quicker to walk from here, I am told, but I decline the opportunity. When our pick-up crawls for the remaining 30 minutes, I begin to believe it. I am looking at the sea ahead and wondering how we are going to descend so far in such a short distance. More hairpin bends provide the answer. Eventually we reach sea level and a wide black-sand beach is our reward as it ushers us into the town. For me, the journey is over. But our one silent passenger, a woman in her sixties, has yet further to go. Laden with fruit from Porto Novo, she has to wait for a boat to take her and her supplies up the coast to Monte Trigo, yet another hour away.

Or, if no boat appears, she has another 3 hours, on foot.