If you want to get to know the ancient culture of the Bulgarian lands you should visit at least one of the Thracian tombs. They are not as famous or as huge as the Egyptian pyramids, but they represent a unique material culture, still not sufficiently examined and still full of mysteries. 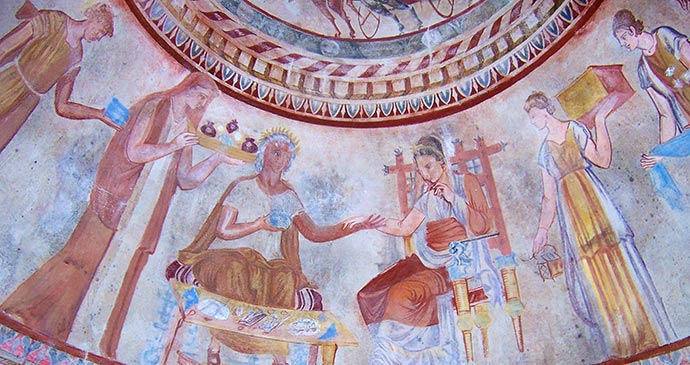 One of the most famous monuments of Thracian art and architecture is the Kazanluk tomb. When it was discovered in 1944 the tomb was the first in the Valley of the Roses. Now it seems it is part of a whole Thracian necropolis, because recently in the region another 12 tombs have been found, each of them with different construction plans and a variety of styles of decoration. For this reason some now refer to the area as ‘The Valley of the Thracian Kings’. The necropolis was probably connected to Sevtopolis, the capital of Odrysae, the most famous Thracian kingdom in antiquity. Sevtopolis, though almost fully preserved, is now covered by the waters of Koprinka Reservoir.

We may never know who the people buried in these tombs really were. It is doubtful that all of them were Thracian kings, but certainly most were a part of the Thracian nobility. The tombs were built between the end of the 5th and the beginning of the 3rd century BC. Those worth visiting include the mound of the Golyama Kosmatka, the tombs of Muglizh, Helvetia and Shushmanets and the tumulus of the Gryphons. Most of them were looted in late antiquity or medieval times; unfortunately even nowadays there are still treasure hunters destroying cultural monuments.

It doesn’t happen often, but sometimes the archaeologists are lucky enough to discover an untouched tomb. A good example of this is the Golyama Kosmatka. It is assumed that the great Thracian King Sevt III, from the 4th century bc, was buried here, together with his armour, weapons, gold and silver vessels and amphoras, and with a golden wreath on his head.

Most other recently discovered tombs have decorations that are in a very poor state of preservation, or almost fully destroyed, so the Kazanluk tomb remains the one with the most spectacular and well-preserved wall paintings.
When it was discovered, the Kazanluk tomb was already empty, probably having been robbed in antiquity. The interior style and the building techniques indicate that the tomb was built during the last decades of the 4th century bc.

In 1977, it was included in UNESCO’s World Heritage list. An exact replica has been built next to the original tomb for the general public to visit.

The building has an interior brickwork wall and an exterior wall of hewn ashlar held together with clay, and, like most other tombs from the period, it consists of three chambers. The first room is the antechamber, which normally contained some of the gifts needed for the afterlife; very often these included a chariot, one or more sacrificed horses and sometimes even slaves, who had to accompany the dead person into his next life. The next chamber is a narrow corridor, or dromos, which was constructed for the preservation of some of the smaller items, such as vessels and food. The antechamber and the corridor would have been decorated with murals, but those in the antechamber have been totally destroyed. In the corridor on opposite sides are two friezes, representing a procession of soldiers. On the eastern wall there is a meeting between two military commanders, followed by their slaves; on the western wall you can see one of the warriors kneeling, and holding up a long curved knife in his right hand, beside a standing man. Both friezes are painted in warm colours, typical of Classical and Hellenistic art, such as Pompeian red, black and white, with different shades of ochre predominating.

The third chamber, the burial chamber itself, is circular and richly decorated, its false dome topped by a granite keystone. The frieze in the burial chamber is the largest and shows a ceremonial celebration, a scene which was very popular in ancient art. The central personalities are a dignitary and his wife, sitting in front of a table with various dishes on it. They are surrounded by a procession of men, women and horses, each of the people carrying a different gift. There are a variety of interpretations of the meaning of the scene, the most popular being that it represents the dead Thracian king or dignitary and his wife in their afterlife, where they would find eternal happiness. The ancient authors mention that the Thracians had a deeply held belief in the afterlife, and went so far as to celebrate when somebody was dying, because he or she would be saved from their sufferings on earth.