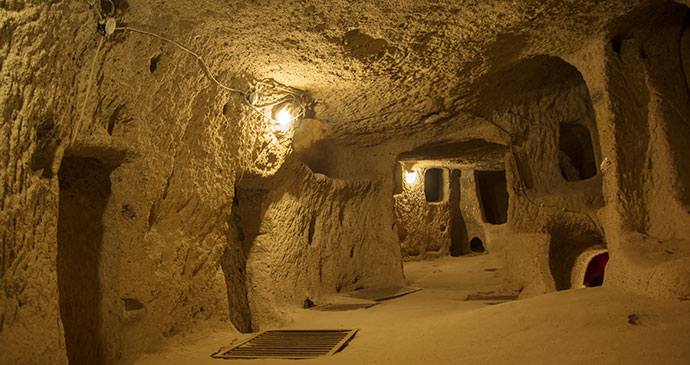 A view of the underground city of Kaymakli © Ozgur Guvenc, Shutterstock

Throughout history the local people used the underground cities as retreats to escape the invading hordes of armies which poured across the Anatolian Plain. They were certainly inhabited in the 7th century bc, and Xenophon, the ancient Greek historian, mentions them in his work Anabasis. Around 40 have now been identified in the area of Cappadocia. They were used as a place of retreat as recently as 1839 to hide from the invading Egyptian army under Ibrahim Paşa. Today, unfortunately they are no longer a retreat from the armies of tourists pouring over Cappadocia, who now pour right underground by the coachload. Tours wreak havoc in these cities: Derinkuyu has eight visitable storeys (Turkish kat) and there is only one single-file stairway to the bottom. If you encounter a tour on Kat 2 you have no hope of reaching Kat 8 for hours, and if two tours encounter each other on the narrow stairs then you have a total blockage. A one-way system has had to be enforced. The full number of storeys at Derinkuyu is still not known, but it is thought to be as many as 18 or 20, only the top eight of which are open. At least 20,000 people are thought to have lived down here, sometimes for six months at a stretch, enough to make a sensitive mortal shudder.

The cities are an elaborate network of tunnels, stairways and chambers hollowed out of the rock, never so low that you cannot stand up, but rarely spacious. The inhabitants must have had an excellent sense of direction to find their way around inside the maze of tunnels. In the lower levels several of the tunnels could be sealed off from the inside by large circular cartwheel-shaped stones, sometimes with holes in the centre for attacking the enemy or as spyholes. Some of the tunnels even link up with other underground cities in the area, to serve as escape routes, and one of them is known to link up Derinkuyu with Kaymaklı, 9km away. This astonishing tunnel, provided with ventilation ducts, is broad enough for three or four people to walk abreast.