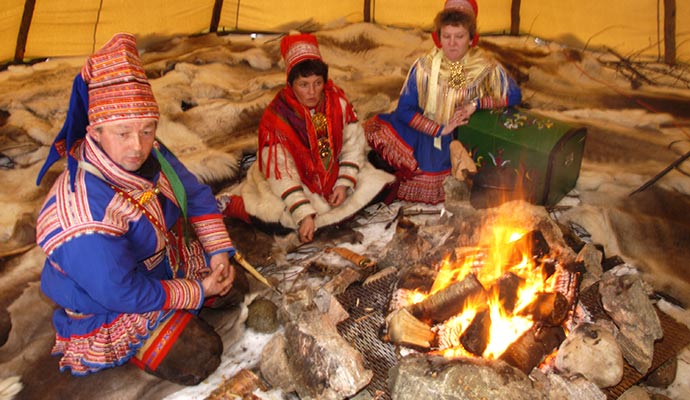 Sámi’s traditional lands span the northern parts of Norway, Sweden, Finland and Russia’s Kola Peninsula but, even in these areas, the Sámi are now a minority. The Sámi refer to their land as Sápmi.

– The Sámi were once called the Lapps, which means ‘scraps of cloth’ in Scandinavian languages. Many Sámi people consider the term to be derogatory.

– Sámi language and culture declined in the first half of the 20th century, especially in Norway where the Sámi population is greatest, due to assimilation and cultural suppression.

– In recent decades, Sámi language and culture have been promoted. There are separate Sámi parliaments in Norway, Sweden and Finland (Russia does not recognise the Sámi as an ethnic minority group), and in these countries the Sámi people share responsibility for the management of their territorial lands.

– It’s tricky to say exactly how many Sámi people live in Scandinavia and western Russia today. Some estimates put the number at around 100,000 while others say the population is just 30,000 or 40,000. About half live in Norway; Sweden has the next largest population.

– In appearance, Sámi look very similar to other Scandinavian people. They are often blond-haired and blue-eyed.

– The Sámi flag is vibrantly coloured, with a half-blue, half-red circle over a background of red, yellow, green and blue panels and stripes. It was raised for the first time in August 1986.

– Traditional Sámi dress varies between regions, but often consists of bright blue wool or felt tunics with red and yellow embroidery and bands for men, and dresses for women in a similar style. Both men and women wear reindeer-skin boots.