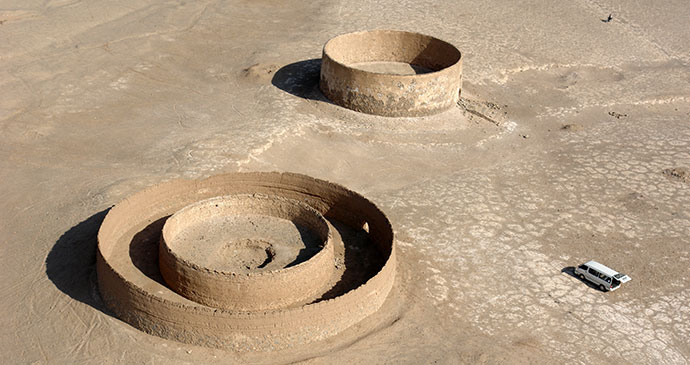 The idea that Zoroastrians are ‘fire worshippers’ is technically incorrect but traditionally great reverence has always been shown to this, surely the most important ‘gift’ to humanity. Prayer, for instance, is always made towards a fire or other light source such as a lamp, the sun or the moon. To devout Zoroastrians even domestic fires should be treated with care, their embers taken to the temple every third day for cleansing of any accidental pollution by adding cold embers from the temple fires. Every ninth day fires of blacksmiths had to be cleansed nine times before those embers could be taken to the temple for such renewal.

It is held that there were four great sacred fires, each later associated with a social class. The Adur Gushnasp fire originated near or in Lake Orumiyeh in the lands of the Medes. In around 400CE it was transported to Takht-e Soleyman where it became firmly associated with royalty and warriors. The second, the Adur Barzea fire of the agricultural class, was known to exist in the 3rd century CE in Parthian lands, perhaps in a major temple complex between Shahrud and Sabzevar or further east on Mount Revand, near Borzinan. The Zoroastrian priests understood the third Adur Farnbag fire to be their special fire, which had been brought into southwest Iran from central Asia. To protect its survival during the Arab Muslim conquests, this fire was divided into two, one being kept in Fasa and the other transported to Sharifabad, north of Yazd. The fourth fire, Adur Karkuy, is associated with Kuh-e Khwaja, near Lake Hamun in Sistan, where the oldest known fire temple in Iran stands.

The Zoroastrian priest is the only person to attend the temple fire, during which he wears a white cotton robe and mouth-mask to prevent his breath polluting the sacred flames, which are fed five times a day. In ancient times a barsom bundle of pomegranate twigs was offered to the flame but today a bunch of brass or silver wire replace this. However, fires at shrines (eg: at Chak Chak) are tended by laymen because they are used only in a minor role, such as cooking the special dron – unleavened cakes – used for certain Zoroastrian services.