In this extract from his newly published autobiography, The Big Cat Man, Jonathan Scott – presenter of BBC’s Big Cat Diary – describes his quest to see one of wildlife’s most elusive predators.

I was flat on my back in England recovering from an operation on a herniated disc when Roy Wallace wrote telling me something I had waited years to hear. A leopard had given birth to two cubs in a beautiful stretch of country called Fig Tree Ridge, just beyond the northern boundary of the Mara Reserve. Roy was the manager at Kichwa Tembo Camp, where I had made my base for the last two years, and if anything could speed my recovery it was this news.

It was the dry season of 1983 and this wasn’t any old leopard– not that seeing any old leopard with cubs wouldn’t have been something to marvel at. No, this was a six-year-old female I had called Chui, the Swahili name for Africa’s most beautiful spotted cat. Roy also told me that Chui’s mother, a shy and wary creature I had struggled to see, let alone photograph, had had cubs six months earlier and that she was currently keeping them at a magnificent rocky outcrop called Mara Buffalo Rocks, a few kilometres to the east of where Chui had given birth. For this reason I named her the Mara Buffalo Female. 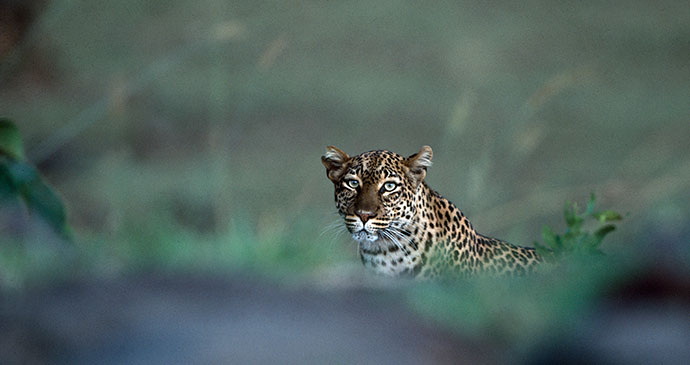 “I had waited all day – 12 hours – for the Mara Buffalo Female to emerge. It was the briefest of encounters, but provided the cover shot for The Leopard’s Tale.” © Jonathan Scott

Roy’s news was beyond my wildest dreams. I had followed Chui for the past six years with only a handful of usable photographs to show for my persistence, though these did include a few precious images of her first litter, born in the area known as Leopard Gorge towards the end of November 1980. Like all leopards, Chui hunted mainly at night, resting up during the daytime in an ancient fig tree or in the cool shady caves along Fig Tree Ridge and Leopard Gorge, at the very heart of her territory. All too often all I could see was a tantalising glimpse of a spotted tail dangling from a horizontal branch. The habit of resting in trees caused the drivers to refer to a leopard as madoadoa ya juu, ‘the spotted one above’ – as opposed to the cheetah, which they called madoadoa ya chini – ‘the spotted one below’ – when they didn’t want their guests to overhear them discussing chui or duma. If the visitors recognised these Swahili names from their guidebooks, it would increase expectations the drivers might not be able to fulfil.

As I sat in my vehicle, desperately hoping to spy a leopard, I would sometimes encounter Maasai honey-hunters making their way through the rocks. They knew that swarms of bees were attracted to cavities in the fig trees and would smoke them out to collect the honey for their potent home-brewed beer; sometimes they would hack into one of the limbs with a razor-sharp simi (tribal knife) to encourage the bees to swarm. Whenever Joseph [Rotich] was in camp he would send word to the Maasai that he wanted to buy some honey to take home to his children. Breaking off a piece of fresh honeycomb to share with me, he told me that it was the food of the gods; certainly I have never tasted honey as good as this.

Visiting Leopard Gorge was always an experience in itself: even if you did not see a leopard, you felt its presence and could soak up a little bit of its aura.

Once I could find my way to and from Leopard Gorge – a thirty-minute drive from camp – it became part of my daily routine. Whether at first light or at dusk I would make sure at least one of my game drives included a visit there. Yet during my first year in the Mara and despite my best efforts I rarely saw a pugmark or the remains of a kill, let alone gun-barrel nostrils and long white whiskers peering at me over a rocky ledge, or a glimpse of a spotted coat to brighten my day. Joseph fared better, of course. As he so rightly reflected, visiting Leopard Gorge was always an experience in itself: even if you did not see a leopard, you felt its presence and could soak up a little bit of its aura; it was like visiting the dressing room of a movie star or the rustic den of an author steeped in all the evocative trappings of their life even when they were not in residence.

As well as introducing me to Leopard Gorge, Joseph had also told me about the Mara Buffalo Female, noting how big she was – fifty kilograms or more, the size of some males – and how dark her coat. In 1978 he had taken me aside quietly one evening and whispered that the old female had given birth to two cubs, telling me exactly where to look if I wanted to see them, smiling at the expression of pure joy his news brought to me. My first sight of those cubs – a male and a female – is something I will never forget: two tiny spotted cats, little larger than a good-sized house cat, peering up at me with their pale blue eyes, a mixture of inquisitiveness and suspicion on their bloody faces as they nibbled on a wildebeest calf that their mother had killed earlier that day and dragged to the base of the tree where the cubs now fed. The kill was too heavy for her to hoist into the tree; first she would have to remove the stomach and intestines – if the hyenas didn’t scent the pungent odour of fresh meat first and steal it. The mother leopard had already fled from the tree as I approached; but the cubs held their ground – until I reached for my camera. That hint of movement was sufficient to send them bolting for the Gorge thirty metres away.

It would be months before I caught sight of the cubs again, and when I did it was once more at Leopard Gorge. The male was larger and shyer than his sister, keeping to the shadows, but the female – the one I later called Chui and came to know so well – allowed me to watch as she sat on a ledge along the rocks, quietly licking the snow-white fur on her belly and warming herself in the soft rays of the early morning sun.

My hands were shaking, the Hensons were ecstatic, all of us hushed into silence by the beauty of the moment.

On one occasion when leopards were still relatively difficult to find and Chui was just becoming independent, I hosted an American family on a ten-day safari. I had guided the Hensons before, but this time they had told me very clearly that their holiday should revolve around finding a leopard. So I was feeling somewhat crestfallen when the safari was drawing to a close with no sign of one. Then on the final chilly morning, as my guests pulled their Maasai blankets a little tighter around their shoulders, standing out of the roof hatches, praying for the leopard we had spent so many hours and days searching for to appear, we found Chui resting high in one of the trees that adorn Fig Tree Ridge.

How she performed that memorable morning, yawning and stretching before climbing languorously from her aerial perch to sit on the sun-washed rocks along the top of the Ridge! My hands were shaking, the Hensons were ecstatic, all of us hushed into silence by the beauty of the moment. Chui’s appearance snatched victory from what had seemed like inevitable defeat.

Read more about Jonathan’s experiences tracking big cats in his brand new autobiography, which has 10% off online: