During Ottoman times a small village in the Bjelašnica highlands had to face its own demons. There were rumours of a dragon-like creature roaming the foothills of Obalj Mountain. Some shepherds swore they saw it, others claimed to have lost sheep to the creature. The villagers were panic-stricken. The local Muslim priest (hodža) decided to go and find this dragon. He expected to find nothing but asked the villagers to pray for him while he was gone. For days there was no sign of the hodža and the scared villagers diligently prayed. Then, as rumour has it, the hodža met the beast just above the shepherds’ summer huts. He too used prayer as his main weapon, and in an instant the dragon was frozen in stone on top of the mountain. The hodža returned with news that he had defeated the dragon. He gave credit to the faith and prayers of the villagers for his impossible victory and named the village Umoljani, meaning ‘Of the prayers’. On a peak just above the village of Umoljani is a rock formation that very much resembles a dragon. 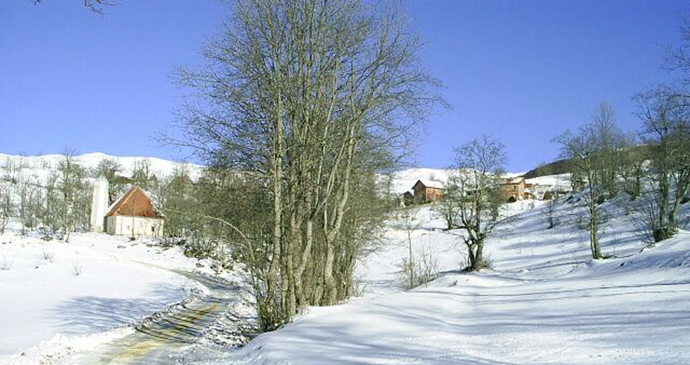 Umoljani, with its mosque, during the winter © Martin Brož

During the last war the entire village was destroyed with the exception of the mosque. The story goes that before the war a Serbian commander’s son was sick and none of the doctors could heal him or even diagnose the problem. He heard of a powerful hodža in the village of Umoljani and brought his son there. The hodža miraculously healed the ailing boy in the mosque. Several years later, when the Serbian military burnt down the village, the commander was the father of the healed boy – and out of superstition, guilt or who knows what, the mosque was spared and is the only remaining mosque of that type on Bjelašnica Mountain.

If you want to find out more about Bosnia’s history, get hold of a copy of our guide to the country with a 10% discount: